These days, vintage Brit bikes have kind of a bad rap. For every rider who waxes eloquent about their old made-in-the-UK machine, there’s another (sometimes several) former owners who will say the nastiest things about their old British motorcycles. Over the years, I’ve heard all the Joseph Lucas jokes, all the kickstarter horror stories, and yet—I’ve heard less whining from BSA owners. I think. At least, they tend to think their bikes are more reliable. And regardless of how robust their engines may or may not be, you can’t argue one thing: bikes like this old ’68 BSA Lightning are absolutely gorgeous, and influenced decades of motorcycle design.

The Lightning was one of the last models BSA every produced, originally entering the lineup in 1965. At that point, the British manufacturers were trying a few new ideas, but most of the machines that actually made it to showrooms were just slight variations on designs that had been around for a while. 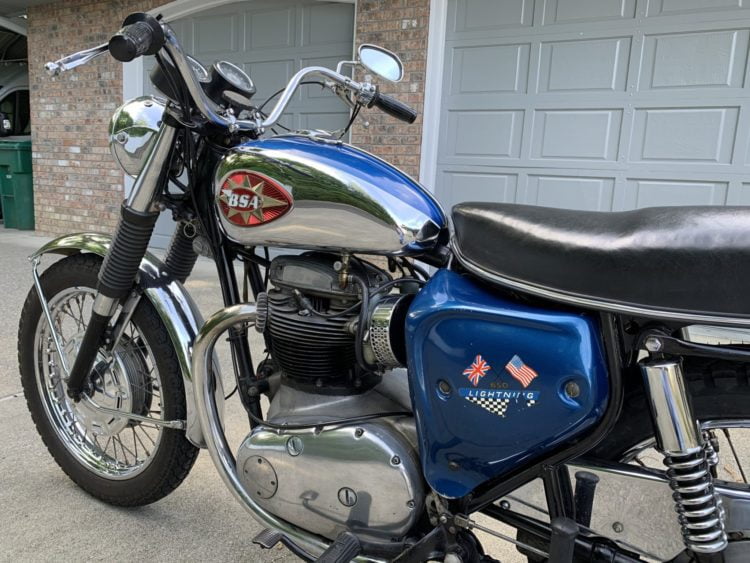 That engine was hardly all-new for the Lighting; the A65 design had already been out for a while.

The Lightning was no exception to that rule; it was based around the A65 engine, a four-stroke air-cooled 654cc parallel twin, with unit construction and overhead valves. The Lightning (aka the A65L) had a four-speed gearbox, with gearshift on the right-hand side of the engine, opposite to what’s standard today. This was common for British bikes in the 1960s, before the moto-world decided to just do what the Japanese manufacturers were doing, with left-side shift.

While the Lightning’s engine was similar to other A65 designs, it wasn’t identical; for this machine BSA supposedly refined it with longevity in mind. This was an all-round bike; meant to be ridden hard, sure, but it had to last. There were other versions of this engine designed for more performance. These days, the BSA Lightning Rocket, with its high-compression pistons, is one of the best-known. Hunter S. Thompson hooned a Rocket all around California during his hard-riding, hard-drinking, days with the Hells Angels. You can hear about the fun he had on that machine below, as read by Johnny Depp:

Hunter S. Thompson said he bought that Lightning Rocket because it was the fastest production bike at that time. The standard Lightning model for sale here would have been no slouch, either, in that era. With a claimed 52 horsepower, the standard Lightning model could supposedly hit a 112 mph top speed. These days, that doesn’t sound so fast. In the 1960s, considering the chassis, tire and brake technology available, exceeding 100 mph was a life-changing, and often life-ending, experience.

This BSA Lightning has those old-school drum brakes, front and rear. They’ll stop you, but don’t expect modern disc brake performance. The ad says this machine has Dunlop Gold Seal K70 tires, with 3.25-19 in front and a 4.00-18 in back. These days, you wouldn’t see a sporty bike with a 19-inch front, but road conditions were much different 60 years ago, and this bike was likely built with the expectation it would need to be able to handle some rough terrain at times. 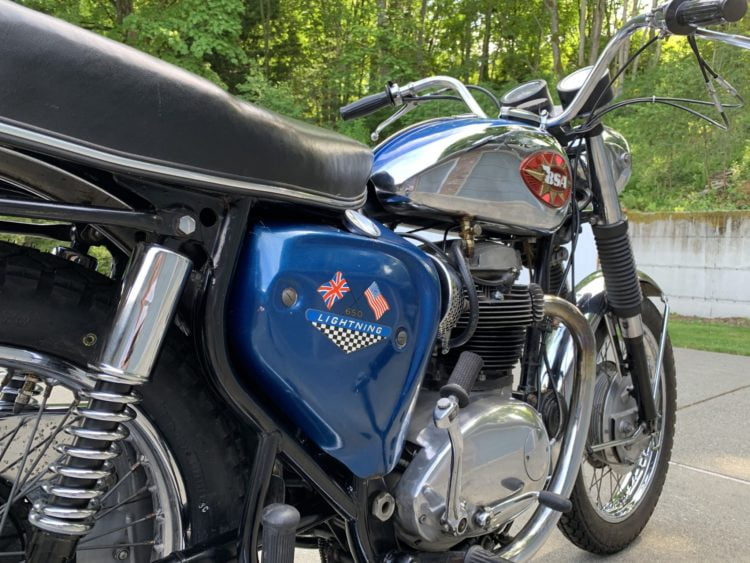 The Lightning looks good from every angle.

When you see a still-running Brit bike from the ’60s or before, chances are it’s been modified, rebuilt or upgraded. This Lightning is no exception, with a Boyer Bransden electronic ignition, and the electrical system converted over to 12 volts. The Amal carburetors are replacements, too. The engine is numbers-matching, though, and those modifications are otherwise stuff that definitely improve the bike. They might not be period-correct, but they’re practical modifications you’d expect to see, not the silly sort of stuff that clueless custom builders do when they just want to get a specific look.

Speaking of looks—this Lightning looks good in the photos, but it’s obvious it’s been used (the odometer reads 17,000 miles; the seller added 1,500 of that total). In the comments section, you’ll see people pointing out the stickers are replacements, there are some re-painted bits, and you can see some corrosion on the metal, in parts. So what? If you want a museum piece, go down to the Barber facility, and look around. If you want to buy a Brit bike that appears to be in decent riding nick, this could be the thing. The owner has a bunch of receipts to go with the bike, going back to 2006, from the proper retailers you’d expect to see. The ad also says the bike had crankcase, gearbox and primary oil changed before it was put up for sale. It also had a new battery installed, had the clutch and brakes inspected, and the valves were set to proper clearances. The rear tire is new, too. Sounds like it should be ready to jump on and ride! 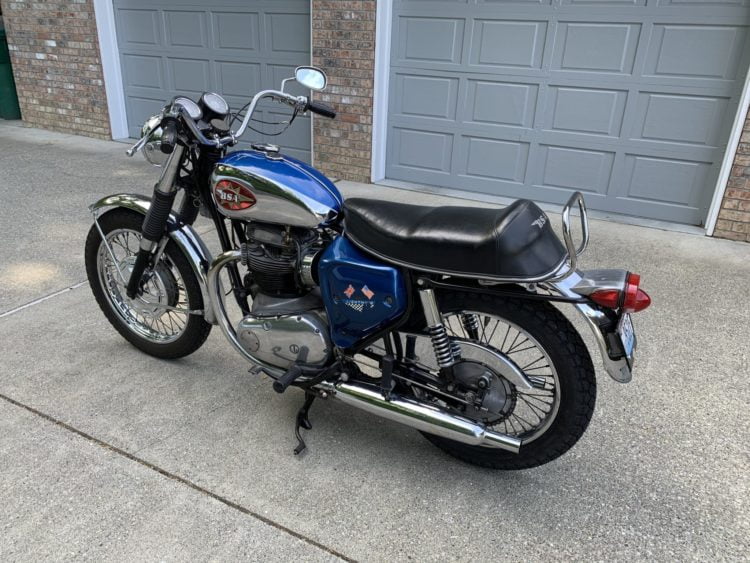 The Lightning is a perfect example of the blend of aesthetics and rideability that made so many motorcyclists fall in love with post-war British bikes. These days, Triumph and Royal Enfield are busy trying to recapture that magic, and the reborn BSA (Mahindra bought up the marque) might be close behind. Here’s your chance to own the original, not a modern re-interpretation.

If you’re interested, bid soon. The auction winds up Monday, June 15. The bike itself is in the state of Washington, and the coronavirus pandemic might make it difficult for out-of-state buyers, but surely you can figure something out if you want it badly enough.