The Honda CB750 was a game-changer when it hit the market in 1969. It made lots of power, was fairly reliable, electric start and disc brakes were standard. The price was right. What wasn’t to like?

How about the weight? At 218 kg dry weight, the original CB750K was a porker, and even though the price was good when compared to the competition, there’s always a market of buyers with less money. So, in 1971, Honda re-thought the inline four, and dropped the CB500 on the market.

Like the bigger 750, it had eight valves, a single overhead cam, four carburetors, five-speed transmission, front disc brake and rear drum. The CB500 lasted until 1973, and in 1974, it was replaced by the similar CB550. 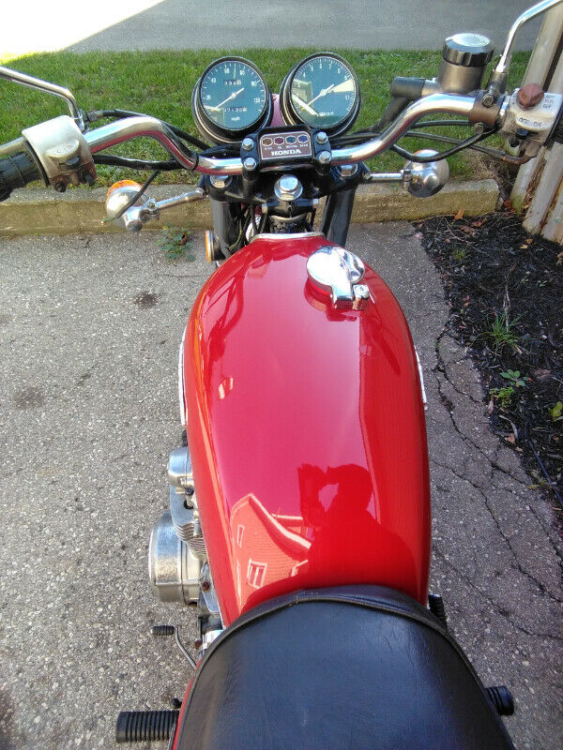 Like the 500, the CB550 was a bit less expensive than the 750, but more importantly, it came in at 198 kg dry weight, a significant difference that improved handling. While CB550 owners will often fondly remember its cornering capability, you don’t hear the same nostalgia about early CB750 models. And while it didn’t have the ponies of the 750 (rated for 67ish hp), the 550’s claimed 38 hp was good enough at the time. Supposedly, the CB550 could top 90 mph. And it was smooth, unlike the middleweight competition (mostly Brit bikes and the Yamaha 650 twin). It was much more civilized than the Kawasaki triples of the era.

So, the CB550 had a lot going for it. It was a sensible motorcycle that could be ridden quite quickly, without scaring yourself. It had many of the advantages of the bigger fours, without their brutal tendencies. Some motojournalists of the time actually thought it was the best four-cylinder motorcycle on the market for real-world riding.

But, it was also in a bit of a tough market segment, as the twins had long dominated the middleweight scene, and it was also pressured from below by Honda’s own CB350. While the 350 wasn’t as powerful, it was still a decent-handling, lighweight and reliable machine, and sold like mad. 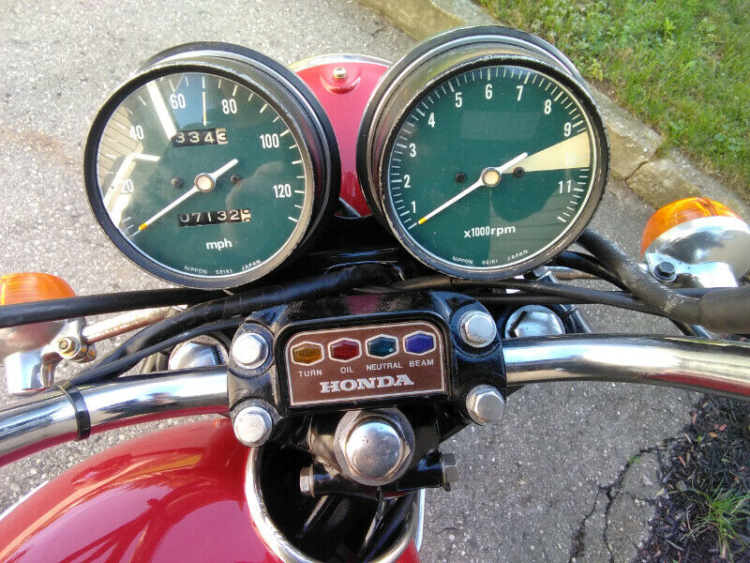 That odometer is in miles, not kilometers, but that’s still pretty low. However, vintage bike odometer readings aren’t always reliable, either. Photo: Kijiji

And, by the late ’70s, other manufacturers had entered the middleweight four market (the Kawasaki KZ650), or had figured out how to make bigger bikes go around corners (Suzuki GS750), or had built bigger entry-level bikes (Yamaha XS400). By 1978, the CB550 was canceled.

In its place, Honda brought out the CB650, a very similar bike which also had a SOHC setup. This pleased some Honda fans greatly, as the CB750 had gone to DOHC in 1979, and the 650 left them with an “old school” option. The 650 was much smoother than the 550, and was noticeably more powerful, and even today has a more modern feel than the 550, which looks and feels like more of a vintage engine.

Therein lies the 550’s greatest strength and greatest weakness for the modern buyer.

The good thing about the CB550? It’s one of the most sensible mid-70’s bikes you can get. They stop and turn better than the 750 (and you can convert to dual front discs, if you want to improve it further). They have long been more affordable than vintage CB750s, which is one of the great mysteries of the used bike market. And because they’re less desirable to custom builders (and always have been), you’re more likely to find one that hasn’t been hacked up too badly. 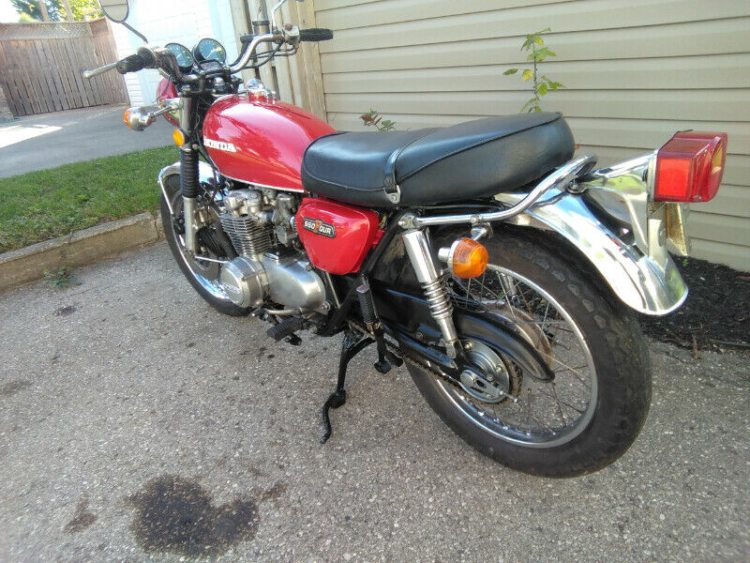 Tires might need replacement, but an in-person inspection will tell you for sure. Photo: Kijiji

The flip side is that the CB550, despite having a pedigree of Honda toughness, is still an old design. It’s going to have a lot more vibration than a modern four. You’re more likely to see an oil leak. Like all vintage Japanese bikes, the charging system is almost certainly going to crap out on you sooner or later, unless it’s already been rebuilt. A blown charging system requires a bunch of frustrating diagnostic work, which often results in a jury-rigged solution, splicing in parts from newer bikes.

Good news, though: there’s no problem you’ll encounter with this bike that hasn’t been documented online for years, and you should have no trouble fixing it, if you’re handy. Just learn how to take care of it yourself, as your local dealer may not even want to touch an older bike like this.

This particular example, for sale in London, Ontario (Canada), appears to be in pretty good shape, although the seller cautions “The bike is not as perfect as it looks in the pictures. Upon close examination some of the chrome has light pitting, and the front fender has a dusting of rust/pitting. From 5 feet it is awesome.” Sounds like a daily driver, then, not a show bike—perfect! The ad says the bike does run well, and the odometer certainly reads quite low, although that’s always suspect on any vintage bike. Sadly, the airbox has been removed and replaced with pod filters (yuck!), but the seller says he has the original. That exhaust isn’t original either, but it’s not loud, according to the seller (coming from Ontario, might that be an old school Hindle setup? Probably not, if it isn’t loud …). 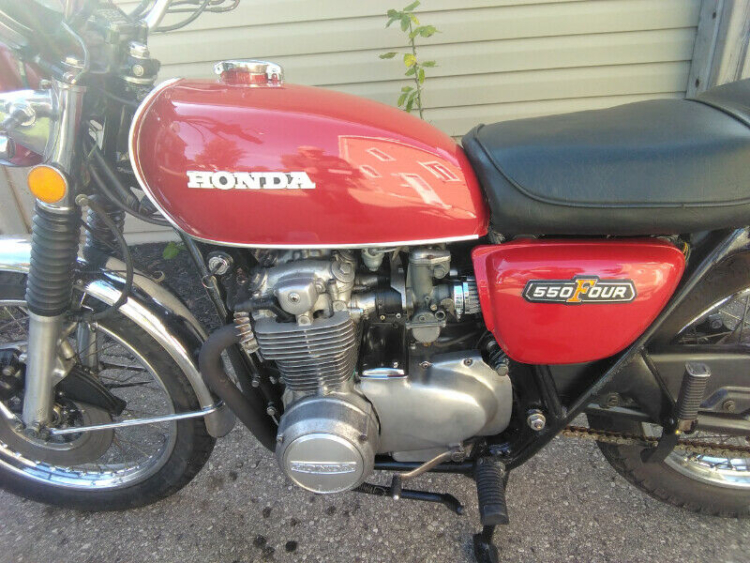 And, very importantly, the seller says the paperwork is in order. Asking price is $2,500 CAD, but it sounds like the seller will negotiate if you show up in person with the cash in hand. As it is, that’s not a terrible price for a vintage bike in good running order; for perspective, I paid $2,000 CAD for a ’78 CB550 with a CB650 engine swap, and that was more than 10 years ago. Given the rise in vintage Honda prices since then, the $2,500 ballpark isn’t too wild, as long as tires/chain/brakes, etc., have some life in them.