Motorcycle manufacturers’ decisions don’t always make sense. Take Kawasaki, for instance. For years, it had no 250s in the lineup, when there definitely would have been demand. Then, Kawi brought back the KLX250, but now with fuel injection. Sensible, but why not also big-bore it, since Kawasaki already makes the offroad-only KLX300? It would be easy, but instead of building a better 250-class machine, Kawasak introduced the KLX230 instead. The 230 is air-cooled, and has less jam than the 250, not more.

Confused? It’s understandable, but it’s not the first time Kawasaki’s done this. Back in the late 1970s, Kawi had the solid, easy-to-ride KE100 dual-sport in the lineup … and then went out and built the KM100, another street-legal two-smoker enduro. The engine was basically identical, the same rotary-valve 100 cc single, with automatic oil injection, a direct descendant of Kawasaki’s G5 model. However, the KM100 only made 9 hp, approximately, and the KE100 made about 11 hp. That might not sound like much, but it’s a big deal when you’re looking at bikes in this class. Top speed was about 53 mph, and that was probably with an underfed teenage rider. Even in the days of the 55 mph national highway limit, that was pretty weak. 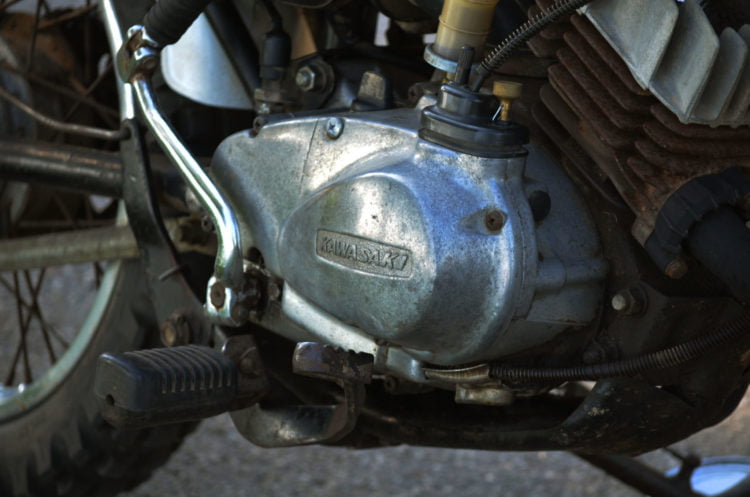 Your standard Kawasaki two-stroke engine, with rotary valve. Autolube injection was standard, but seems to have been removed from this bike. Photo: BringATrailer

The KM had a five-speed gearbox and chain drive, as you’d expect, and a kickstarter. This was the 1970s, and even smaller riders were expected to be hairy-chested enough to start their motorcycle without the electric boot.

The KM100 came with drum brakes front and rear. The front forks were spindly, and there was a dual-shock setup in back, as was standard at that time. The KM came with a street lighting kit, including headlight, signals and taillight. 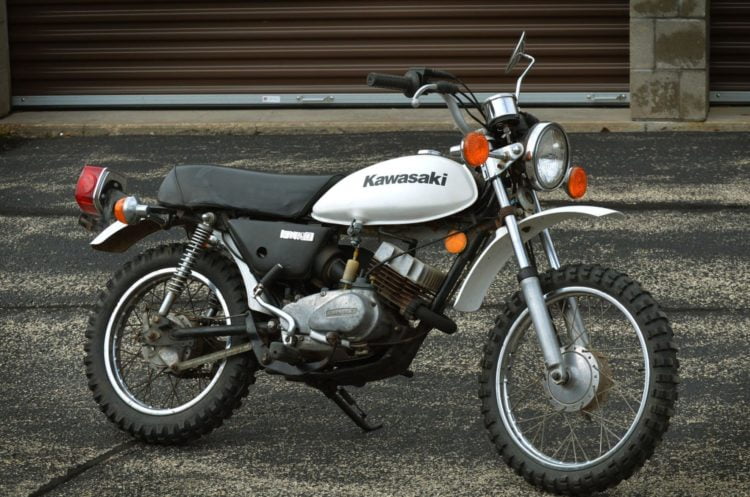 Basically, this was a downsized KE100, which was hardly a big bike itself. Photo: BringATrailer

Kawasaki built several machines based on the KE100’s design, but none of them had the longevity of the KE. The KM was dropped from the lineup in the early 1980s, and is somewhat of a rarity now. You do see KE100s for sale regularly, as it was in Kawasaki’s North American lineup all the way through 2001, and will go down in history as the last street-legal Japanese two-stroke motorcycle in the US and Canada. The KM100, well, it’s just another of those evolutionary dead ends of the late 1970s, when then-ubiquitous two-stroke dual sports were mostly being forced out, and replaced by four-stroke machines. It was a bike that was built for abuse, and once these things were used up, they were left in sheds, or back yards, or fields, where they slowly rusted beyond recognition.

For that reason, this KM100 for sale in Menasha, Wisconsin, is a bit of a standout. For a decades-old trail bike, especially from that era of motorcycling, it seems to be in pretty decent nick. According to the ad, the previous owner gave it a paint job, decals, and new tires and sprockets. The seller claims to have tuned the carb (previous owner rebuilt it, the ad says) and taken the bike for a ride, so it should be in more-or-less running order.

It’s not in perfect shape—there’s a patch on the seat, and some rust on the headlight bucket. And more importantly, it’s listed as a ’76, and that date might not jive with official Kawasaki lore, as sources claim the KM100 didn’t hit the market until 1978. Also, while it’s being sold in Wisconsin, it comes with a “clean Vermont title.” You’d want to get to the bottom of that mystery. 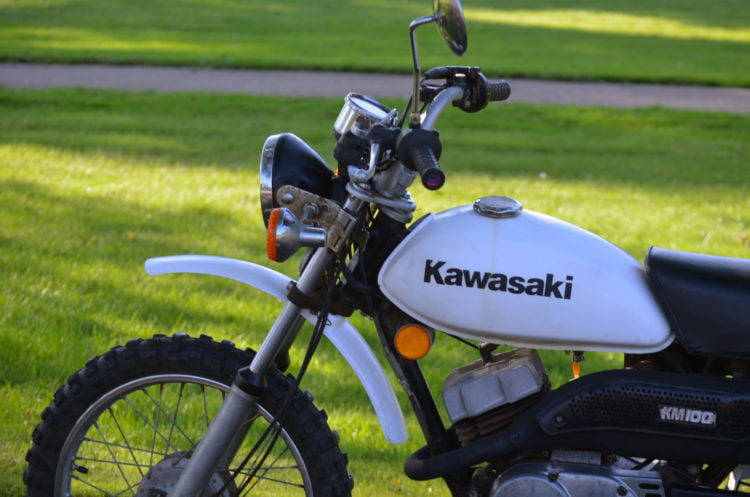 There are a few niggles, but the bike’s not in bad shape for a 45-year-old trail machine. Photo: BringATrailer

As well, it seems the oil injection system, which automatically mixes two-stroke oil with gasoline, is gone. The ad says “The engine requires pre-mixed fuel,” and one of the comments points out “the factory oil injection system has been removed. I say this b/c the right side, plastic side cover has the approx. 1″ diameter hole in it that would have allowed one to see the level of two-stroke injector oil in the tank. Yet there does not appear to be any tank showing through this ‘sight hole.’ ” As the comment says, this was a common modification by owners who viewed the auto-injection system as unnecessary weight, or perhaps unreliable.

There also seems to be some pieces missing from the end of the muffler, and while the bike’s in good shape, it’s hardly showroom condition, either.

However, there’s no reserve on this auction, and the price isn’t silly high. It’s getting harder to find these older two-strokes, and vintage bikes are getting more expensive. This is a machine you could ride as-is, or continue the restoration work for a cool display machine. But bid fast—the auction is over May 15.