The Harley-Davidson XR750 is the winningest flat track bike in history, but H-D wasn’t the only machine in that scene. Racers used Indians, Brit bikes and even Japanese bikes. The Honda RS750 was by far the most successful Japanese flat tracker of all time, winning plenty of AMA hardware in the mid-’80s, but a decade earlier, Yamaha had its own success story with the XS650, thanks to King Kenny Roberts.

Kenny Roberts Sr. is known for many things, but you could argue he really made his mark by flogging the factory Yamaha XS650 successfully in AMA flat track racing. Roberts was Rookie of the Year in ’71, riding the Yamaha, and took the ’73 and ’74 AMA Grand National titles by riding Yamaha’s TZ750 roadracer for the paved races, and the XS in the dirt.

By rights, the XS shouldn’t have won those titles. Even when it debuted in 1969 as Yamaha’s first “big” four-stroke motorcycle, it was outdated, based on a Hosk design from the 1950s. It took a lot of tuning trickery to make the Yamaha competent against the factory-supported Harley-Davidsons, but Yamaha had a secret weapon: legendary race tuner Shell Thuet, hired around 1972. 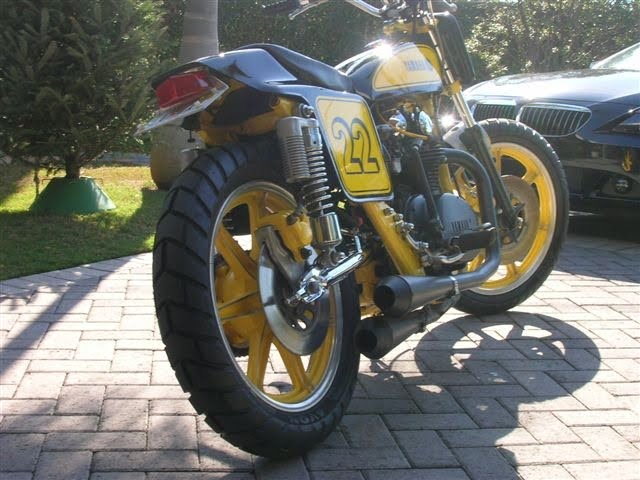 Thuet figured out how to get max performance from the XS650’s air-cooled 654cc parallel twin, with 360-degree crank, SOHC and two valves per head. Not only was he successful in building a machine that beat Harley-Davidson, he was successful in convincing a lot of other riders the XS650 had potential. Yamaha published a tuning manual for the XS, with Thuet detailing how to boost performance.

By the mid-’70s, though, the aging XS couldn’t match the updated XR750 around the ovals, and Yamaha started focusing on other projects. However, plenty of enthusiasts were still interested in the XS650. It was an affordable, durable motorcycle, and thanks to Shell Thuet, owners knew they could get more speed out of them. From big-boring the cylinders, to new cam profiles, to exhaust modifications, Thuet had shown what was possible.

Custom builders liked to use the XS for street trackers, as they came with a street-legal VIN. Photo: flattrackersforsale.com

Meanwhile, there was another interesting scene growing out of the flat track community. Flat track racers wanted to ride their bikes on public roads. Other riders simply liked the looks and ergonomics of flat track racers, and wanted to build custom machines with similar lines. That’s how we got street trackers—basically, flat trackers for the street.

Street trackers have been around for decades now, but until recently, you couldn’t just buy one at a dealership—you had to make one yourself, or have someone build it for you (unless you lived in Japan, and could find a Honda FTR223—but that’s another story).

The details would differ slightly with each motorcycle, because that’s how it is with custom bikes, but generally, the rules were the same. Street trackers almost always have a front brake, something you don’t get on a flat track bike. They have wide, mid-rise handlebars, a fiberglass tailsection with solo seat and numberplates instead of stock sidepanels and headlight (they often have a mini headlight built into the front numberplate). Sometimes they come with cast wheels, sometimes with spoked wheels, but they usually have matching 18-inch or 19-inch wheels front and rear. Usually, the front fender is shortened, with no rear fender. There’s almost always a custom exhaust; sometimes it’s high-mounted, like a classic scrambler exhaust, but not always. Usually, the stock fuel tank gets the boot, and the builder bolts on a smaller, trimmer unit.

Look around online, and you’ll see all sorts of bikes used as the basis for street trackers, but the XS650 has historically been one of the most popular. Unlike the Harley-Davidson XR750, the XS came street-legal from the factory. That meant less hassle from The Man, if you wanted to register your bike for riding on public roads. Also, with the XS’s popularity on dirt tracks, there’s always been a booming aftermarket for the XS, with small shops selling race-style bodywork, exhausts and other bits for the bike. This made the XS attractive to plenty of builders, who couldn’t be fussed to weld up their own exhaust or fab their own fiberglass panels. 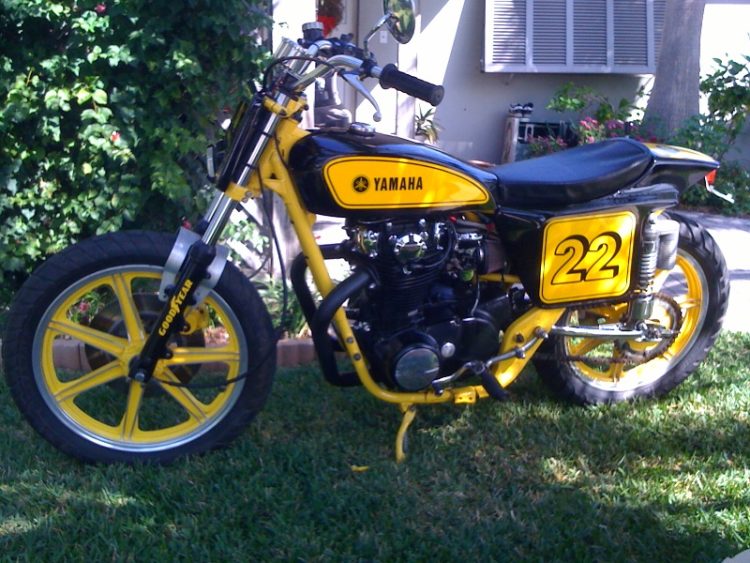 Sadly, this engine seems to be lacking any Shell Thuet magic, although the yellow/black paint recalls the glory days of Yamaha’s racing team. Photo: Flattrackersforsale.com

What about this custom?

This machine, for sale in Key West, Florida, is a modern recreation of a vintage street track build. The seller says the bike was never raced; it’s a 1976 model, with bodywork from Omar’s (tank, number plate, rear fender). The exhaust is also from Omar’s. The bike wasn’t powdercoated; the motor mounts, swingarm, wheels, frame, etc., are painted, and the builder says it’s one thing he wishes he could do over. There’s no front fender, just a fork brace, and there’s a set of aftermarket piggyback shocks in rear.

The engine itself seems to be stock, with lots of attention to detailing, but no hop-up parts. That’s going to disappoint speed junkies, but at least it should be fairly reliable. The OEM electric start is still operational, too (some XS-based customs install a block-off plug for the starter port, and run kickstart-only).

At $9,000, pricing seems high on this bike. However, it is a pretty good representation of the XS-based street trackers that were floating around about 20 years ago. Still, you should be able to find something pretty decent for less than $9k, which is almost enough to buy an Indian FTR1200, Polaris’s modern take on the street tracker formula. This custom street tracker Sportster from Mule Motorcycles just sold for under $15k, and is most likely a much nicer bike. But hey—you can always call and make an offer, right?