Picture a kid, a skinny teenager. He’s checking out the new dirt bike his cousin recently bought. Does he want to ride it? Why not? He’s given a completely inadequate explanation of how the clutch works, and is sent off to ride around the yard with a warning to try not to run into anything. Five minutes later, the ride is over, and there’s another lifelong motorcyclist created.

That skinny teenager was me, riding my cousin’s 1970s-vintage Yamaha Enduro 100. But, I’m far from the only person to feature in a story like this. Although Honda often gets all the credit for its tough, early dual sports, Yamaha also built a load of these bikes: simple, light machines that were starter bikes for thousands, maybe hundreds of thousands, of riders. They were the ultimate gateway drug.

There was one big difference between Yamaha’s early machines, and Honda. Honda went all-in on four-stroke technology fairly early, and built its reputation with the XL line. Yamaha did develop the XT line of four-strokes, but also had the DT line of two-stroke bikes. It made sense: they were cheap enough to build, they held together well, and in those days, people were familiar with two-stroke motorcycles. It helped that environmentalists weren’t running around getting in the way (perhaps the oily smoke kept them at bay). The first DTs were sold in the late ’60s, and depending what market you’re in, you can still find them today. But, the mid-to-late ’70s was the heyday of the DT line in North America. 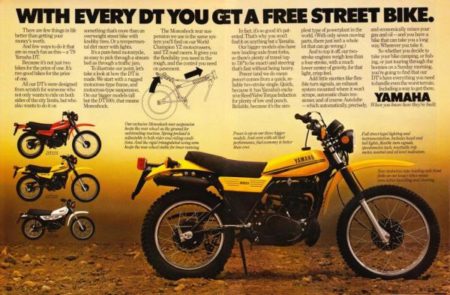 Yamaha had a full line of DT street-and-trail machines, and some of them are still available elsewhere in the world today. Photo: Yamaha

By today’s standards, this would be a pretty wimpy motorcycle. The air-cooled single-cylinder made about 10 hp, which is even less than the most anemic modern dual sport, the Suzuki DR200; even in its day, the DT100 was reckoned a bit weedy. If you’re curious as to what that original two-stroke engine sounded like, you can see Ken Kaplan showing one off from his museum/sales room below:

It had 145 mm of suspension travel in front, and 90 mm of travel in rear, from a twinshock suspension setup (later DTs would have a monoshock design, patterned of Yamaha’s race bikes). Drum brakes were standard, front and rear. The front wheel was a 19-incher, the rear wheel an 18-inch rim, which limited its offroad capability. Dry weight was 93 kg, not terrible, but it’s not as if the 100 had the same chassis design as a modern motorcycle.

But, it was tough, and it was easy to ride. With a two-stroke engine, there were no valves to adjust. An autolube system meant you didn’t have to measure out two-stroke oil if you didn’t want to; make sure to keep the autolube system topped up, and the bike took care of that for you (until it didn’t, and then you had to rebuild the engine, which is why many owners preferred to pre-mix gas anyway). Although it had a pretty low top speed, that meant the brakes weren’t over-taxed, and that the engine’s low-end torque made it easier for beginners. The low seat height was also an advantage. If you fell off, you didn’t have far to go when you hit the ground. 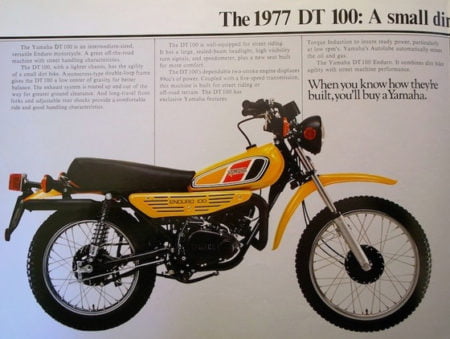 Even today, these motorcycles are fun to ride, if you have realistic expectations. And there’s a surprising number of them around, if you count up the DT125s and DT175s. Locally, at least, I see more of them than any other line of ’70s machines, and many of them appear to be in running condition. They also tend to look like they’ve been beat with the ugly stick, but that’s what happens when a bike ends up relegated to running around potato fields, and then gets left in a barn for a couple of decades. The good news is, these are simple enough that they’re not too tricky to get running, and if you need parts, there are plenty on eBay, even if your local dealer can’t help.

So this machine for sale in Quebec, is it worth it? Maybe. 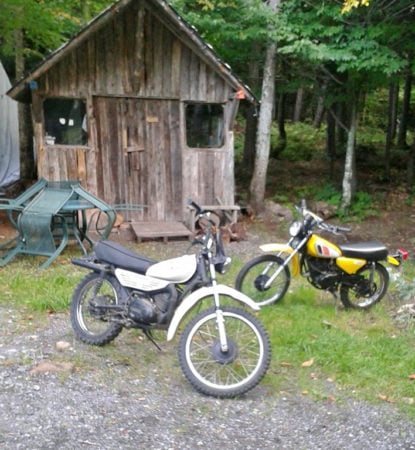 A couple of old enduros out in the Canadian woods. Where are the owners? Did the bears get them? Photo: Facebook

With the Canadian dollar’s anemic performance, that $1,200 CAD asking price works out to less than $850 US. It’s certainly in the range of other similar-vintage DTs on the mused market in Canada. It’s in Quebec City, so a little outside the normal roaming range of most riders in the US northeast, even before all this coronavirus flap started. And, the seller doesn’t speak English, although he does seem to have a grasp of Google Translate. Money, too, is the universal language … The photos do look to be in pretty decent shape, although that may change if you see the bike in person. The ad says it’s in top condition, though, suitable for a collector, and that the price is firm. Or at least, that’s what Google Translate seems to indicate.

The bottom line: When you see them for sale cheap, these bikes are generally well-thrashed, so if this one’s in decent shape, it might be worth the effort.