Although many dual sport riders don’t like to hear it, the big thumper is in decline. The manufacturers have mostly abandoned the idea of building a modern large-capacity single-cylinder motorcycle. Some have been dropped altogether (Kawasaki KLR650), others remain in the lineup with no changes for decade after decade (Suzuki DR650, DR-Z400, Honda XR650L).

Big dual sports have never seen the same sort of breathtaking technology and competition between brands as supersports, motocrossers or other competition bikes. However, big-bore duallies were still extremely good sellers for the Japanese manufacturers ever since the 1970s, and it all started with the Yamaha XT500. 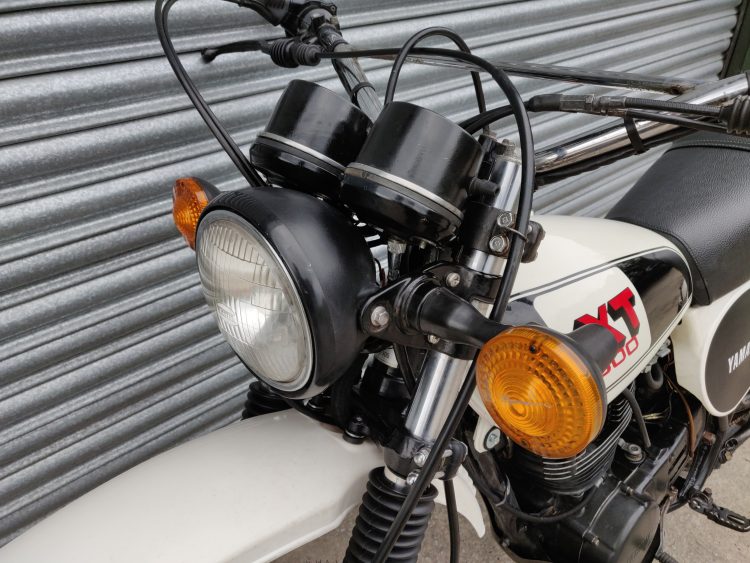 This particular edition is a 1978 model. Photo: Car and Classic

Introduced in 1975, Yamaha delivered the XT500 to most markets in 1976. Yamaha actually had another large single on the market a year earlier, the two-stroke DT400 enduro, but the XT500 was a much different motorcycle. It was one of Yamaha’s first four-stroke designs (the XS750 came out the same year; the XS650 had been around for a while, in various guises, and was really a German design). It was an exciting time for the Japanese motorcycle industry, and many designs of this time were first forays into new territory. Some of those designs were technical failures, or sales failures (see also: Suzuki GT750). Some of them were flawed, but buyers could see beyond the problems, and bought them anyway.

The XT500 fit into that mold. It was powered by an air-cooled single-cylinder four-stroke engine, with 499 cc capacity and single overhead cam. Bore was 87 mm, shorter than the larger thumpers that followed the XT500; stroke was 84 mm, pretty close to later machines in the 650 thumper class. The early models used points for ignition, not CDI. Like all trail bikes of the time, the XT500 was kickstart-only. An oil-in-frame design helped Yamaha keep the engine compact. 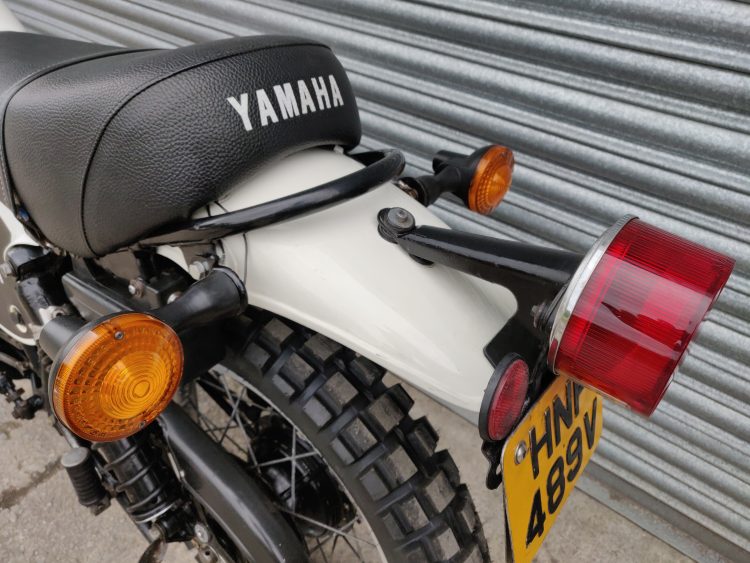 LED indicators were obviously the stuff of sci-fi in 1978. Photo: Car and Classic

Also, like all trail bikes of the time, the XT500 had a set of dual rear shocks. Although Yamaha had a major part in the Great Monoshock Revolution, that was still in the future, and you had to make do with old-school twin shocks on the rear. The only adjustment was preload in back; the front forks are pretty agricultural by today’s standards. So are the brakes—the original XT had drum brakes in front and back.

However, at the time, this bike was something completely different. A few other manufacturers, particularly the Brits, had made some big-bore singles, but they’d been horrible oil-leaking rattletraps. Plenty of fun in their own way, sure, and successfully raced, but they had long fallen out of style at this point.

The Yamaha was almost a revolutionary take on the idea of a big single. It could have used a counterbalancer, but if you were a hardy soul, you could still ride it a long way without worrying about breakdowns. It didn’t drip oil at every stop. It was, most of all, reliable. And Yamaha made incremental improvements as time went on, lightening the bike and adding other touches to improve performance and reliability. 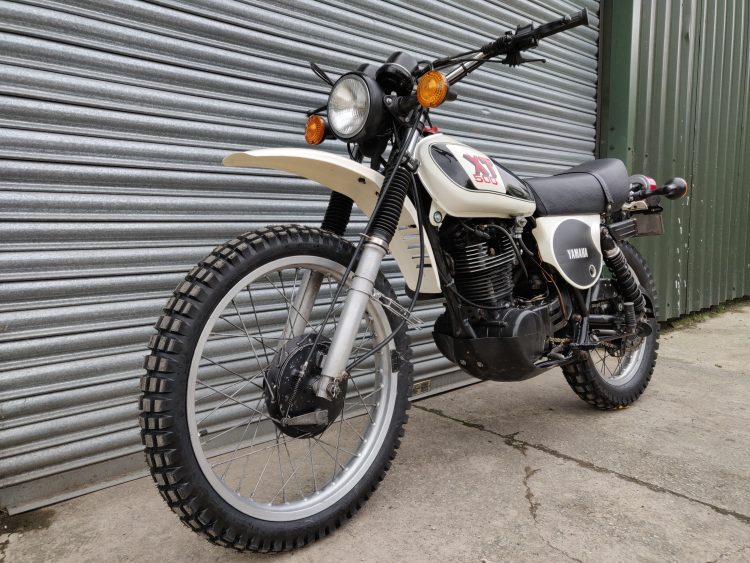 Only drum brakes up front, but that was standard for the time. Photo: Car and Classic

Although it was street-legal and aimed at the growing dual-sport market (which was then dominated by smaller machines like Honda’s XL250 and Yamaha’s own two-stroke DT models), racers were quick to see the advantage of running the XT, instead of heavily modifying a street bike to run in the desert. The XT500 proved itself by winning the motorcycle category in the first two Dakar rallies. It even had a respectable performance in motocross, with Bengt Åberg winning a race and taking ninth overall in the 1977 Motocross World Championship aboard an XT500.

The machine also caught the eye of the early adventure riding scene. Previously, long-distance travelers had to be content with either small dual sports in the 250 class, or street bikes that weren’t optimized for bashing around third-world Jeep tracks. The XT500 gave them a choice that could more or less keep up on the highways, but would have no trouble traversing tricky terrain off-road as well. Author Chris Scott used an XT500 for his first desert bike, and you’ll hear other figures like Austin Vince talk about how seeing XT500s on overland journeys helped them realize there other touring options besides a big street bike.

With the XT500’s release, Honda saw the opportunity to jump in the market as well, and soon released the similar XL500R. Then Yamaha countered with the XT550, then the XT600, and so on. Honda, Suzuki and Kawasaki all brought out similar models in this time period, updating them frantically. The 1980s was the only time we saw a true arms race in the big thumper market, and it was glorious. We can thank the XT500 for being the bike that started it all. 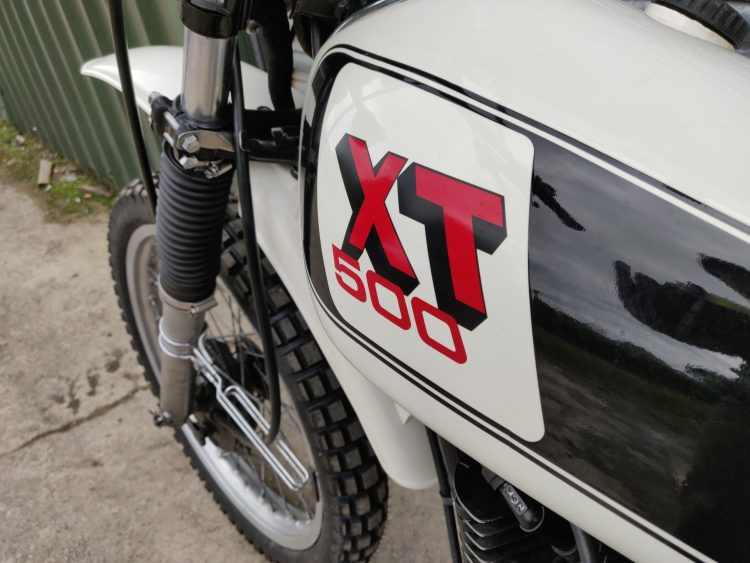 The bike that won Dakar, at least in the early years. Photo: Car and Classic

That’s why it’s kind of sad to see so many of the old 500s being cut up these days. For some reason, young “custom” builders have taken the XT as one of their favorite bikes to hack and slash into their own vision of a “scrambler.” Never mind that the XT500 in its stock form was a far better-working and better-looking scrambler than many of the abominations being turned out for a quick buck, with pipe wrap and fake piggyback shocks suckering buyers.

For that reason, this 1978 Yamaha XT500 for sale in Great Britain is a beautiful thing, in its relatively unmolested condition. What’s not so beautiful is the price tag. The buyer wants £8495, which outstrips the price of a 2019 Ducati Scrambler Icon in the UK. Still, these are getting to be very pricey machines if they’re in good nick, at least in the British market, and the seller’s got all sorts of paperwork to go with the bike, if that sort of thing matters to you. Let’s face it, this bike is likely going to be a collector’s piece at this point anyway, because you can get a machine with lots more performance for lots less money. But that’s not why you’d buy this bike in the first place—this bike sells because it’s historic, and because it’s cool. There are worse motorcycles to throw that kind of money at!