Quick, name a motorcycle from the 1970s with air-cooled 800-class motor, shaft drive and enough power for all-day touring with a load of luggage. Must be talking about a BMW, right?

Wrong. While BMW’s /7 series provided sensible middleweight touring capability, Suzuki had its own competitor, the GS850. It was an intriguing machine, very practical in its design, and with lots of desirable features … but the 850 kind of faded from popularity over time. What’s up with that?

For starters, let’s look at the 850’s predecessor, the GS750. Really, the 750 was more of a half-brother than an ancestor to the 850, because many parts would mix and match between them. The 750 came out in 1977, with considerable similarity to Kawasaki’s Z1 900, just a bit smaller … and with way better handling. Even when I was a kid hanging around bike wrecker yards, decades later, grizzled old mechanics would occasionally break from their hangover-induced topor to say it didn’t matter what ’70s UJM you were riding, they were basically the same engine. Some would go around corners better than others, but once Kawasaki had the Z1 engine, others knew a good design when they saw it, and used it as inspiration.

The GS750 was Suzuki’s first proper four-cylinder four-stroke, and the next year, Suzuki dropped two new four-cylinder bikes on the market. Power-mad hoons got the GS1000 (as popularized by Wes Cooley), and more practical riders got the GS850.

Check out that shaft drive! The GS850 was designed for long-haul miles. In 1979, you would have considered this a sport tourer. Photo: Cycle Trader

The GS850 took the 750’s design a step forward, and a step back. First, the good stuff: Basically, the 850 was a 750 motor, punched out another 100cc. While this didn’t add a big pile of extra horsepower, it did add torque, which is what you want in a long-haul bike. It had a great reputation for smoothness, too. Add in a comfortable seat, and you had a comfortable all-day bike.

After big-boring the engine, Suzuki went into the Twilight Zone, and added a shaft final drive to the engine. Honda had the shaft-drive Gold Wing and CX500, Yamaha had the XS750, but this was still mostly unexplored territory for the Japanese OEMs. Suzuki gambled on attracting a new crop of touring-minded bike buyers, and it worked out. Although some older shaft drive bikes had a rep for bad handling, the GS850 seemed to escape too much criticism. So far, so good!

And here’s where we get to the bad stuff. For the late 1970s, the GS750 might have been the perfect Japanese motorcycle, with a smooth blend of power, handling and weight. The GS850 had no appreciable power gain, and it was heavy. What went wrong? Partly, it was the shaft drive, which sapped power and added weight, and partly, it was the frame. Suzuki used a beefy GS1000 frame for the 850, not the lighter 750 frame. The result? The GS850 had a dry weight of 557 pounds. Add on a heavy 1970s luggage package (Windjammer fairing, fiberglass bags), and you’ve got a real behemoth on your hands.

Remember, though, most other bikes on the market were heavy, too. It’s just that Suzuki had moved everything forward when it introduced the 750, and had now taken a step back. 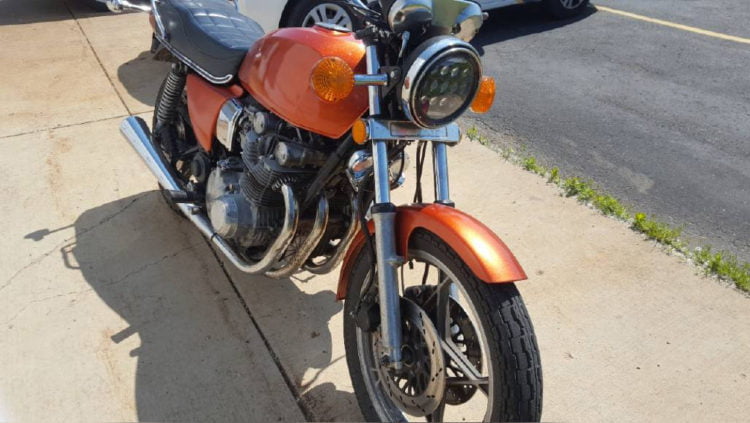 In its stripped-down standard form, the GS850 wasn’t so ungainly at least, and contemporary reports showed owners were fairly happy with the machine’s reliability. As time went on, though, these bikes ended up in wrecking yards; enterprising mechanics took out the 850 top ends, and grafted them onto GS750 motors. The result? A faster 750, and who cared about that heavy old 850? As a result, the GS850 has probably suffered a worse survival rate than its 750cc and 1000cc contemporaries. Even the most reliable motorcycle will eventually hit the boneyard, if you let little problems add up to big ones. When they actually broke down, there was a ready market for those 850 engine parts.

In other words, that’s a lot of time spent taking care of the fussy details that most sellers haven’t bothered with in years. You can see the bike still has some scabby bits (the exhaust has rusty headers, and the paint job doesn’t look too exciting). But, if it’s sat in a barn for 11 years, as the ad claims, then it’s easy to see how things could get a little rough around the edges.

The headlight is obviously a replacement, and frankly, it’s kind of ugly—but if it functions well, that can be forgiven. This bike was designed for real-world riding from the very start, and that’s what it likely would be best-used for now. If the $1,800 asking price is too high, see if you can get a bit of a discount. Then, get over to eBay, and buy some NOS luggage racks, and a simple flyscreen. Bam, you’re touring ’70s style! Just leave the bell bottoms at home.