For some reason, mid-sized touring bikes never really caught on in North America. Except for the Honda VFR800 – and arguably, the KLR650 – touring bikes have mostly been big-cc machines over here, for decades. It’s too bad, because in the early 1980s, the idea looked promising, when Honda brought out the GL500 Silver Wing.

Honda loves playing mix-and-match with its engines. Hey, that parallel twin is doing well at commuter bike duty? Why not turn it into a scrambler! It’s true now, with machines like the CRF250 Rally (closely related to the Rebel 300, etc., etc.), and it was true in the 1970s and 1980s, when Big Red built its first V-twin, then used it for a diverse range of machines. 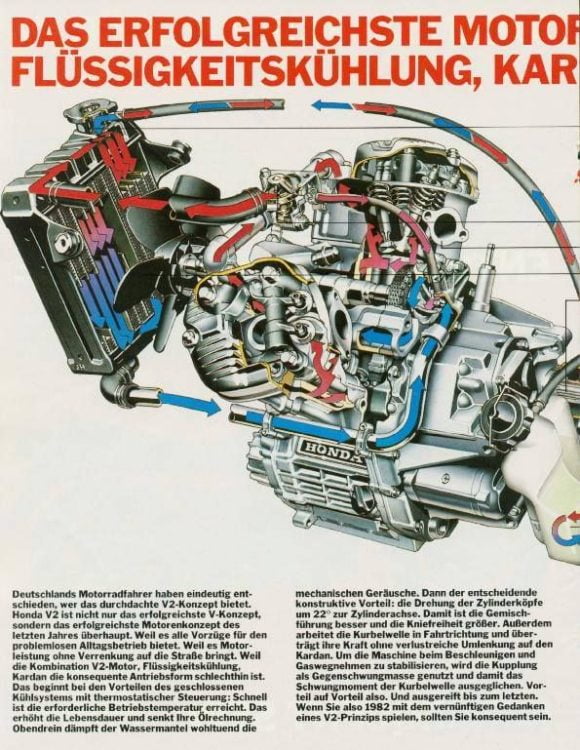 Check out that engine! Weird-looking now, and weird in 1978, too. But, Honda got a lot of use from the CX design. Photo: Pinterest

The CX engine had some flaws, most noticeably with the camchain adjuster. Early versions had a manual adjuster; when owners didn’t do the required maintenance, the camchain would develop excess slack, and eat into the crankcase, creating a sludge of aluminum dust in the sump. Honda realized this was a bad thing, and went with an auto adjuster. Even on those later models, it’s a problem worth looking out for.

Over time, the CX also developed a reputation for leaky water pumps, and like almost every early-’80s Japanese bike, the charging system will eventually crap out. Experienced mechanics will find this a time-consuming, but simple, job to replace. Noobs will curse their luck, and wonder why they deserve such ill fortune. Like the earlier Gold Wing models, the CX’s charging system was at the back of the engine, requiring you to half-strip the bike down and drop the motor to swap it out.

Except for the timing chain, the rest of those issues weren’t a problem in the engine’s early years. The weird, twisted-cylinder, pushrod-valve design proved remarkably robust, and would run forever with little maintenance. When you did have to wrench on it, the heads were sticking out for easy access, so owners found valve adjustments, spark plug changes and other basic tasks were a breeze. Or, they just ignored them, and rode the wheels off the bike. Dispatch riders, in particular, loved the low-hassle machine, even if it was ugly.

Honda decided the original CX500 design was too ugly, so they updated it, and added the Silver Wing and other derivatives to the lineup. Photo: Honda

When Honda decided to overhaul the bike’s looks, it also started developing other machines using the same engine. There was a cruiser, the Custom, which used the V-twin motor, but with low rider styling and twin rear shocks. There was even a turbocharged version. In 1981, Honda tried brought out the Silver Wing, a middleweight tourer with the CX500 engine.

You could get the Silver Wing with different levels of trim, just like you could with the Gold Wing. This one, an ’82 model for sale in Toronto, came with the Interstate package, including crash bars, hard panniers, and a top box (a larger top box was optional). You got the same basic package as a Gold Wing Interstate, but smaller.

In later years, there was a GL650, as the 500 was reckoned a bit low on power. However, there’s still plenty of zip with the smaller engine, as long as you don’t mind running high in the rev range. This seller says “Engine comes alive at 120, can climb up to 180 without too much trouble.” Of course, he’s speaking about km/h, not mph, but still, that’s more than enough to earn you a stay in a holding cell in many jurisdictions.

Wot, no aftermarket stereo? You’ll have to use your Sena instead. Photo: Kijiji

Many owners installed aftermarket stereos in these bikes, but this particular model doesn’t seem to have one. There was an official Hondaline accessory package, including stereo, decals and other add-ons, but those are hard to find. If you wanted to add an a stereo to this one, at least you wouldn’t be dealing with the previous owner’s wiring.

The ad says the odometer reads 60,000 km. If accurate, that means this engine has plenty of life left; in their heyday, motorcycle couriers noted the CX V-twin could do 100,000 miles if you took care of it. Even if it conked out, replacement engines aren’t too hard to find.

At this point in the bike’s life, it’s the other stuff that can be problematic. Bodywork degrades, trim pops off, and the whole fairing starts creaking as you pick up speed. Electrical systems start to corrode, and need replacement. Chrome develops rust spots. None of this is unique to the GL, it’s just the natural course for an older motorcycle. 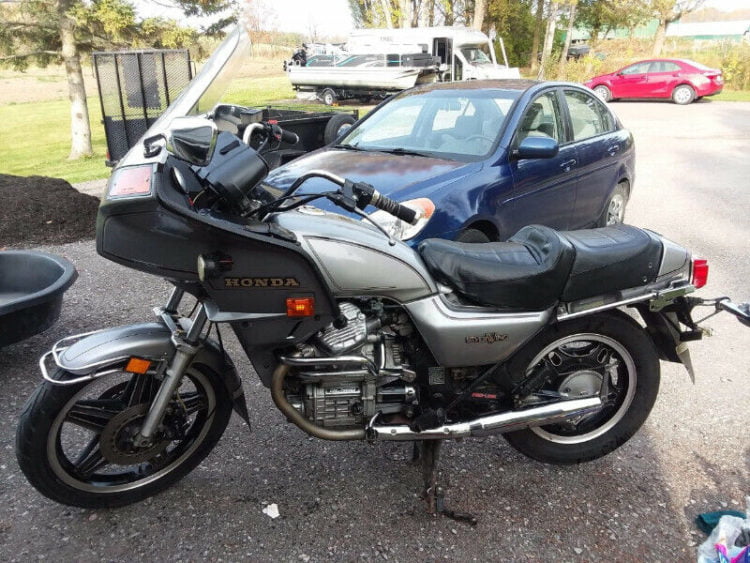 Here it is without the bags. That passenger seat should pop off, to be easily replaced by the topbox, if you want a tidy, compact city runabout. Photo: Kijiji

However, this machine does appear to be regularly used, and the ad says the owner says it’s in good condition (the photos in the ad seem to back that up). There’s a list of maintenance items that were taken care of (air filter, engine oil, spark plug, rear brake shoes, rebuilt master cylinder and front brake calipers). At least this bike hasn’t been just dusted off, after rotting behind a barn for a decade. Asking price is $1,600 CAD, which seems pretty reasonable if everything checks out. It might be a little hard for US buyers to get across the border for this machine, but sooner or later things will open up again. If you’ve been looking for one of these for a while, it might be worth the wait.