One exception, though, was the Kawasaki KE100, like this one for sale in Alexander, NY.

For reasons unknown, Kawasaki kept importing this weedy little street-and-trail into North American markets as late as 2001, long after all the other street-legal counterparts had gone the way of the dinosaur. In fact, the KE100 outlasted most two-stroke dirt bikes as well. Not bad, for a machine that saw its genesis all the way back in 1976! 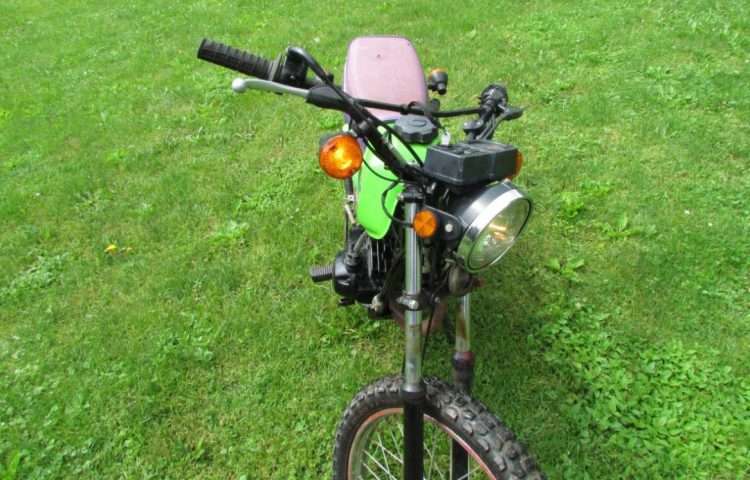 No wonder it looks old-fashioned: this design really goes back to the early 1970s. Photo: Craigslist

Really, the design went even further back than that, as the KE100 was a direct descendant of the G5 , and if you put the two machines side-by-side, they don’t look much different.

The KE100 was one of Kawasaki’s well-liked rotary-valved two-strokes . You can find an explanation of how rotary valves work here; basically, they had a disc mounted to the end of the crankshaft which controlled when the intake opened. This was a superior, more reliable system than old piston-port designs, and pre-dated the reed valve design. For the time, these bikes were known for making decent power when compared to their predecessors. Nowadays, they’d be considered pretty wimpy, with approximately 11 horsepower. Considering their weak output, though, the KE100 is thought to be decently torquey. Not the arm-wrenching power of a CR-series MX bike, for sure, but adequate.

The KE100’s air-cooled single-cylinder engine (with five-speed gearbox) had an oil injection system, which automatically mixed the two-stroke oil in with your gasoline. Many riders don’t use these systems on older bikes, as they fear a malfunction which would then ruin the engine. Instead, they premix the fuel. However, if your injection system is working properly, you don’t have to mess around with that if you don’t want to. 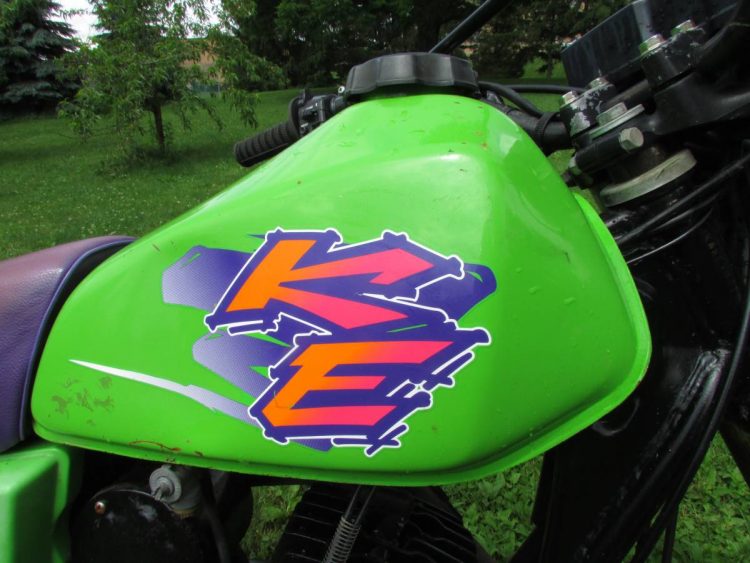 Despite its age, this KE isn’t in terrible shape.

The KE100 rolled on a 19-inch front wheel and 17-inch rear, and had very basic suspension. Up front, it sported old-school, tiny telescopic forks, and in the rear, it had dual shocks. That’s right, it was the last of the Japanese dual sports to have a twinshock rear suspension.

In fact, you could really call this the last real scrambler on the market. By the time the new Triumph Scrambler came out in 2006, it carried only a visual heritage to past scrambler models. Sure, it had cool high pipes, but it was a big bike compared to the lean machines of the ’60s and ’70s. The KE100? Well, it was basically unchanged from the ’70s. The twinshock suspension wasn’t a nod to the past, it was a design that had just never been updated.

To match the old-fashioned suspension, Kawasaki had drum brakes on the KE100, front and rear. Again, this wasn’t a pretentious cash-in on nostalgia; these were the original style of brakes from the ’70s, and they just never changed with the times.

Another old-school touch: the KE100 had a kickstart, and never came with an electric start. Thankfully, 99 cc two-strokes aren’t hard to boot over.

One huge plus to the Kawasaki’s dated design was its weight. Unlike the bloated barges passing for scramblers today, the KE100 was extremely light, with a wet weight just under 200 lb. This was a bike that you could throw into the back of your pickup yourself, even if you forgot the ramp. 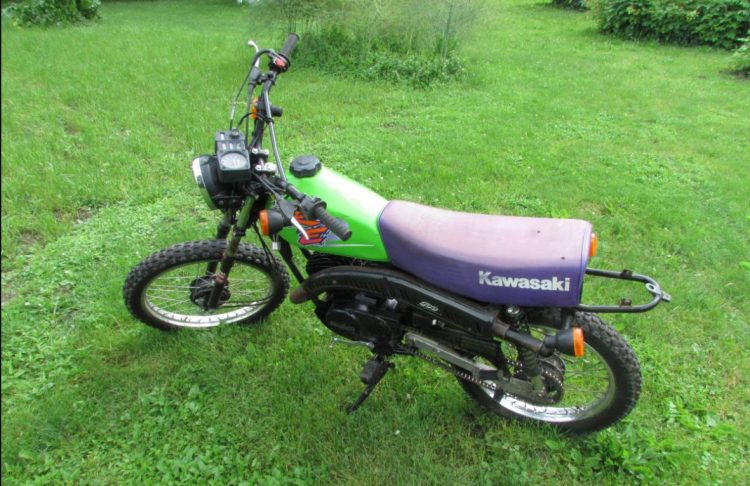 That ghastly purple and green paint job was pretty standard for the final 20 years of KE100 production. Photo: Craigslist

Soooooo what about the model for sale here, in New York? At $750, the price isn’t a steal, but it’s not terrible. Even though it’s an ’82, it’s basically the same bike that was sold all the way through until 2001, even down to the garish paint. This particular example appears to be missing the front fender, and the blinkers don’t work, says the seller. There are a few other missing parts listed, and the biggest deal of all is probably the missing paperwork: “If you are looking to put it on the road you will have to file for a lost title,” says the ad.

The reality is, that’s true of many of these older trail bikes, as they were flogged by multiple generations of kids who didn’t necessarily keep track of the legal documents. But if all you want is a bike to ride around the back 40, that’s not such a big deal.

And, that’s probably as far as most people would realistically take this machine. Sure, you can run on backroads to work, or even further if you want, but with a top speed in the 65 mph range (depending on the size of the rider, largely), you’d have to have a deathwish to tackle the superslab. The person who buys a machine like this will be happiest if they accept it for what it is: a cool old design that recalls a time when motorcycles were simple, but still put a smile on riders’ faces.