If there was one bike that defined the 1980s, it would be the Kawasaki GPZ900R. There’d be a few that would give it a run for the money; the original Honda Hurricane, certainly, but that came along late in the game. The Hans Muth-designed Suzuki Katana, too, but while that bike had revolutionary styling, its mechanical bits were fairly standard.

Not so with the GPZ900R! It had the styling, and the mechanical bits, to lay the groundwork for big-bore superbikes for decades to come. But not just that, it was also a pop culture icon, thanks to a little film from 1986 called … Top Gun.

Top Gun was a smash hit, a marketeer’s dream. It duped thousands of young’uns into joining the US Navy, where they all assumed they’d be fighter pilots, but ended up peeling potatoes and scraping paint. Less disappointingly, it also convinced thousands of impressionable motorcyclists and wannabes that if you wanted to be as cool as Tom Cruise and score chicks like Kelly McGillis, the bike to use for such adventures was the Kawasaki GPZ900R. Powerful motivation, indeed! The Kelly McGillis dreams may have never been realized, but the GPZ900R certainly did fulfill the need, the need for speed.

Aside from the clever product placement, why was the GPZ900R such a hit? Easy—it was revolutionary when it came out. Other bikes (Suzuki GSX-R750, in particular) soon eclipsed it, but it was a powerful bike, with commanding presence.

The tagline when it came out was that it was the “World’s first liquid-cooled inline four superbike.” Previous GPZ models were air/oil-cooled, as was most of the competition in the early 1980s. The era’s superbikes were usually around 1000 cc, and often ended up with big bore kits, as the general attitude was that there was no replacement for displacement. So it was an odd, and bold, choice by Kawasaki to go to the 900 cc capacity, but if you watch the video above, you’ll see there was reasoning behind that choice. Kawasaki wanted to build an engine that was more compact, which improved ground clearance and also easier to stuff into a fairing. Look at old superbikes of the late ’70s and early ’80s, and you’ll see that many owners had engine guards installed, to protect the cases when they started dragging parts. This wouldn’t be necessary on the GPZ, as not only did it have a smaller block (no need for bulky air cooling fins, etc), but other parts were cleverly integrated around the cylinder bank, all to conserve space.

Then there was the fairing. Bodywork was coming into vogue in the ’80s, but few bikes were as plasticked-up as the GPZ. It was the new superbike look, of sporty machines that were intended not just for street thrills, but to win races on-track (ironically, if you look at some modern “naked” bikes, they’ve basically got the same fairing as the GPZ; check out the Aprilia Tuono for a good example).

These days, the steel frame would make a performance junkie sneer, the modest 113 hp would be cause for scoffing, the 16-inch front and 18-inch rear wheels would be laughable. But at the time, this was all hot stuff. 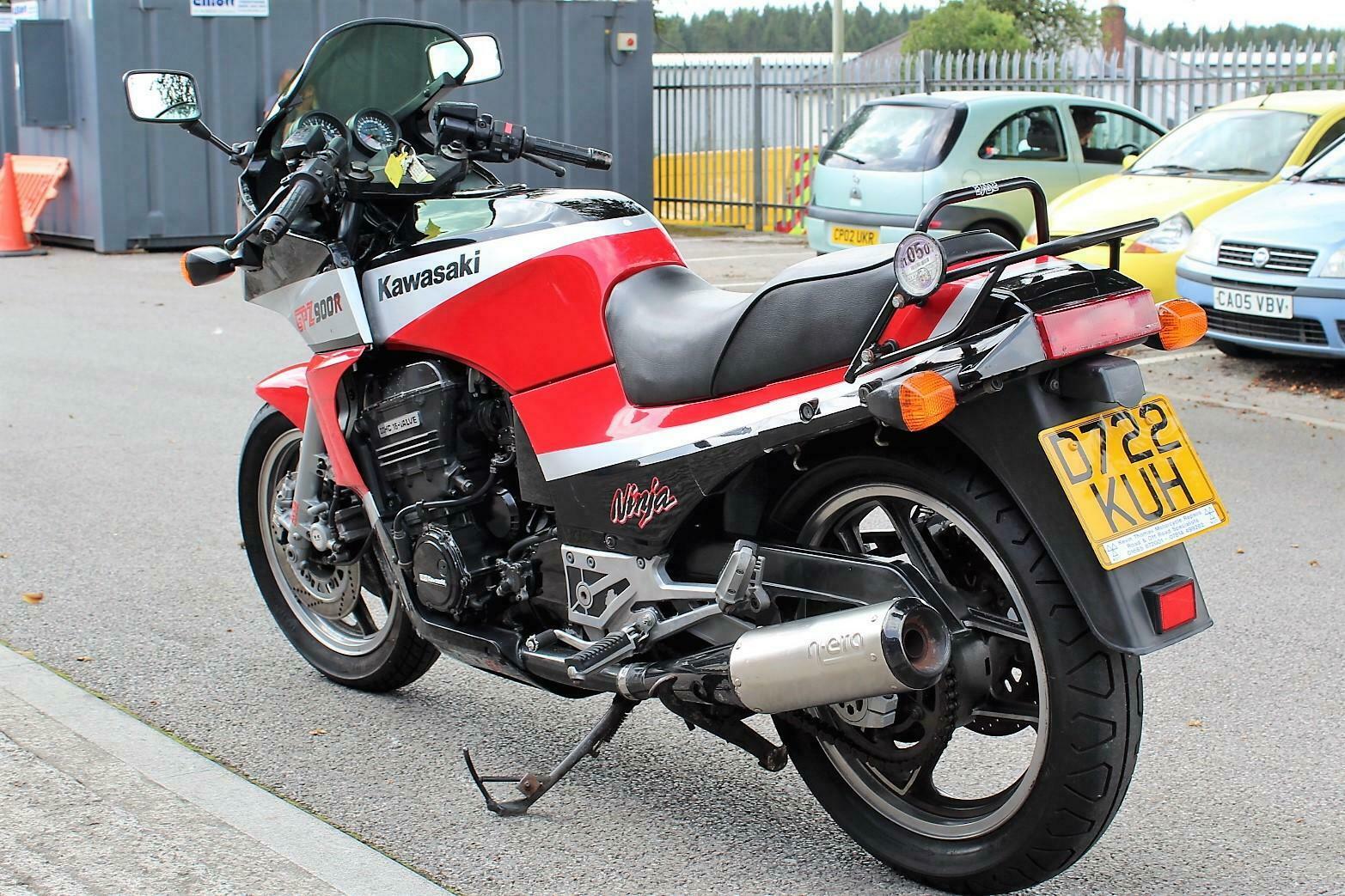 Today, it’s not so revolutionary or sporty-looking, but it still has a no-nonsense, mile-eating attitude. Photo: eBay

Upon its release, the new 900 was an instant winner, because it nailed the all-round role that ’80s sportbikes had. You wanted a powerful road machine, one that could haul in the twisties, with rocket-ship acceleration in the straights, lots of room for passenger and pilot? The 900 filled the bill. Or maybe you wanted the top machine in the production racing bracket? The 900 was your bike. The Honda Hurricane did much the same when it came along at the end of the decade, but it was more refined. The GPZ had the flair of the Lord Humungus—tons of muscle, wrapped in just enough bodywork to let everyone know how serious it was.

It also helped that a generation of motorcyclists was ready to climb the food chain. The kids that had learned on minibikes and dual-sports in the ’70s had moved on to air-cooled musclebikes in the late ’70s and early ’80s, and were ready to find a sharp-handling new machine that could still satiate their lust for power. Alas, it was only a temporary fix, like all drugs, but it was very much the right product at the right time.

The GPZ was soon superseded in its role as Kawi’s top superbike, but hung on for years in many markets, and was only discontinued in the Japanese domestic market in the early 2000s, an almost-unbelievable run for a sport bike. 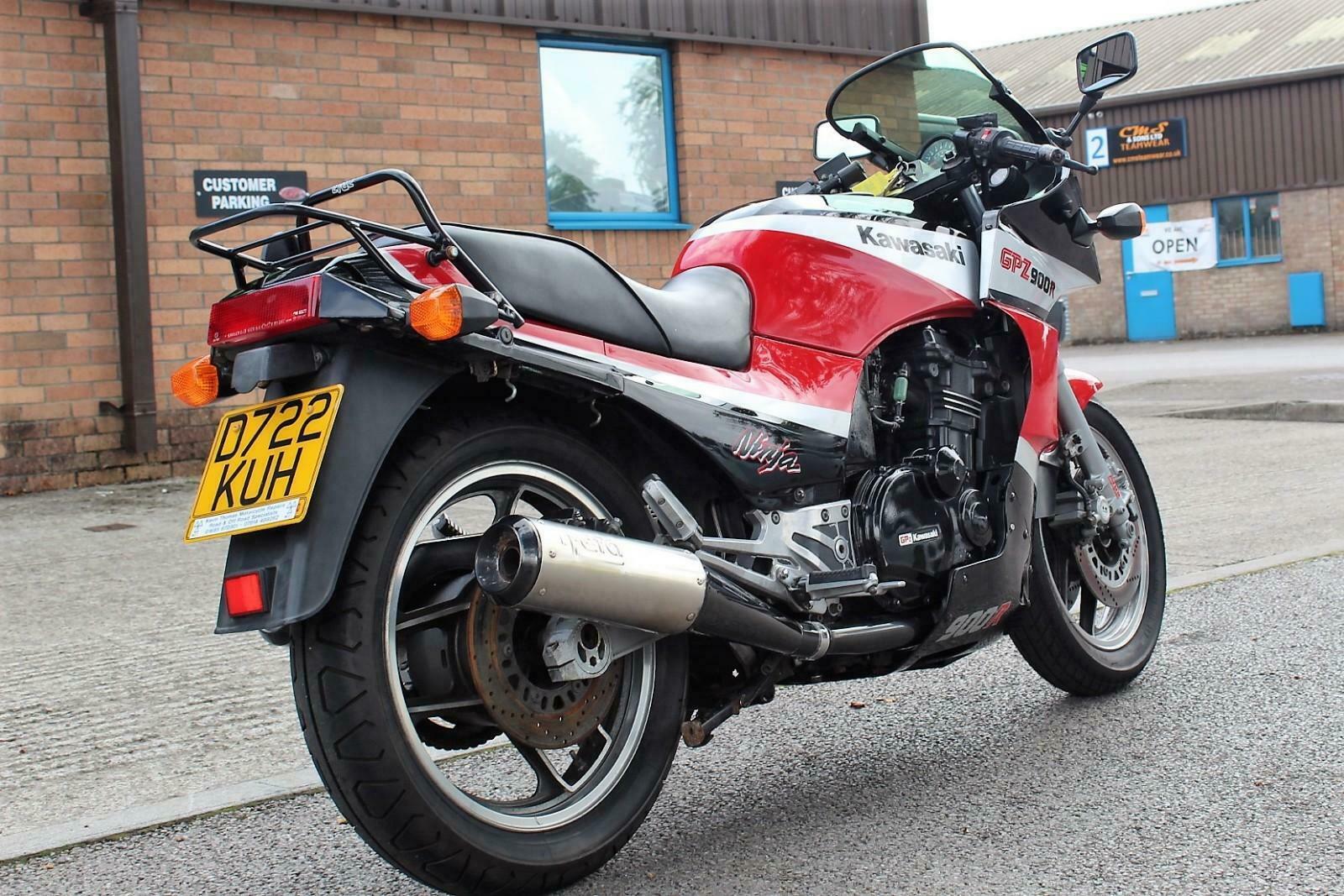 For sale in the UK, but no doubt they’d ship … Photo: eBay

With that in mind, this 1986 model, for sale in the UK, is even more interesting. Unlike other bikes from the ’80s, the GPZ remained in production for so long that parts were being built fairly recently, as long as you don’t mind some mixing and matching. It looks in relatively good nick for a 34-year-old bike, certainly with some signs of usage, but that’s not necessarily a bad thing, if you’re buying a bike to ride, not to look at. The ad says it’s been off the road for a few years, but just had a major servicing (“Valve Inspection, Carb Strip, Fluids, Seals, Bearings And A New Clutch Master Cylinder“) and has a current MOT. At the asking price, £4,499, you could certainly get something newer, but would it have the old-school cool that this machine has? Probably not. Buy it, before the Top Gun 2 marketing drives the price up. More details at eBay, or at GTSuperbikes.com.

Staying Sane During Lockdown: Grounded Yet Adventuring On?

A New Era of ADV Storytelling