There’s an extremely interesting motorcycle collection coming up for sale next weekend, at Mecum’s Indy 200 auction. The Al Phillips collection has everything: vintage superbikes, classic minibikes, and some real oddballs, including this 1986 Yamaha V-Max sidecar rig. It’s powerful, it looks good, and it’s a crazy idea that makes you wonder why this thing was built to start with.

It’s not that the V-Max was a bad bike, far from it. It won all sorts of magazine praise in its early years, and was the fastest motorcycle in the world when it was brought out in 1985. Clever engineering was the secret behind its speed. Yamaha used the same liquid-cooled, DOHC 1200cc V4 for the V-Max that it had used on the Venture touring bike, with shaft drive and five-speed gearbox. The Venture was basically a Gold Wing competitor, a nice bike and all that, but nothing mind-blowing, with around 90 horsepower. However, some mad scientists at Yamaha looked at the engine, and figured there was a lot of potential inside. They did a bunch of top-end tinkering, boosted compression, and then came up with the legendary V-Boost system. 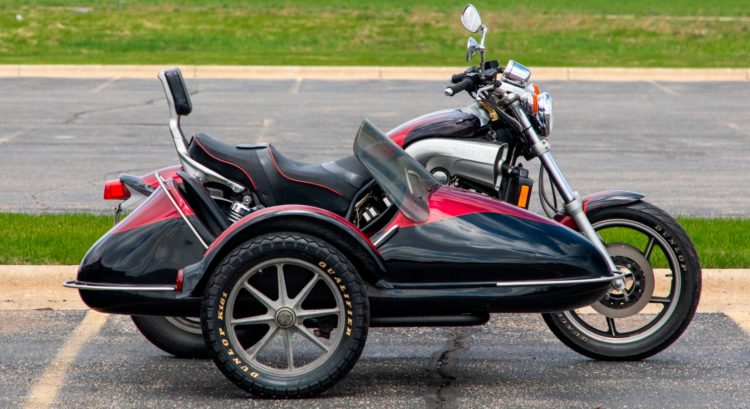 A cool old-school sidecar, matched to the most famous muscle bike of the 1980s.

The V-Max had four carburetors. Under 6000 rpm, the bike ran on one carb per cylinder. Once you topped 6000 rpm, the V-Boost system kicked in. The ignition sent a signal to butterfly valves in the the intake manifold; the valves connected two carbs together, and the V-Boost system opened the valves. Now, instead of one carb per cylinder, the bike was running on two carbs per cylinder, with the effect increased as rpm raised. It was Mad Max engineering, but it worked, and the V-Max made about 145 horsepower when it debuted.

Today’s litrebikes will put out over 200 horsepower, but back in 1985, the most powerful 1000cc machines weren’t even close to the V-Max. It smoked everything, even the silly-powerful Honda V65 Magna, which had previously been the world’s fastest motorcycle. And the V-Max wasn’t just all about muscle: It was a bold-looking bike. There was nothing discreet about it. It had been designed for the excess-loving American market, and it showed. 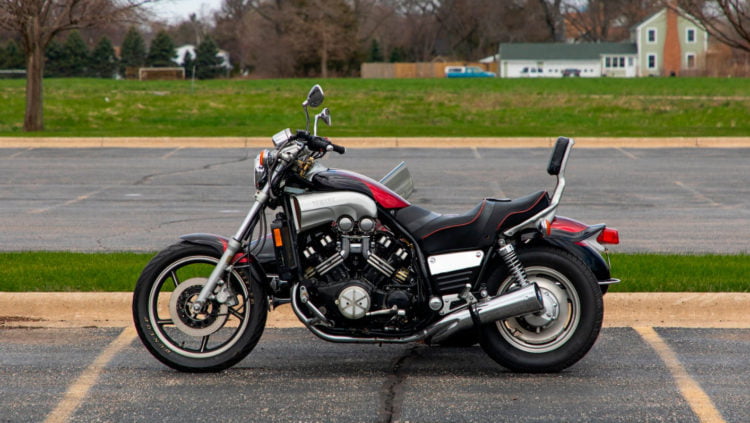 With the notorious poor handling of the V-Max and the added complication of a sidecar, this is a rig that should terrify both the pilot and passenger.

Alas, Yamaha’s engineers had put all their work into muscling up the V-Max, and didn’t spend enough time refining the handling. Ask any serious motorcyclist who’s owned the original V-Max, and they’ll tell you, it was scary-fast in a straight line, and just plain scary in the corners.

But the reality is, lots of riders don’t care about cornering (that’s how we got the Harley-Davidson Breakout!), and some riders live a long way from the twisties (hello, Nebraskans!). And, some riders want a hot rod for drag racing, and some riders are willing to sacrifice some cornering capability in order to own a super-powerful machine. Add it all up, and there were plenty of people who wanted a V-Max; it lasted in Yamaha’s lineup for 20 years before it saw any serious changes. That’s a very decent legacy, and if you talk with old-school bikers, they’ll all still pay plenty of respect to the original V-Max. No doubt that was partly because the V-Max wasn’t a “fake Harley,” like the Virago and so many other machines—it charted its own course. 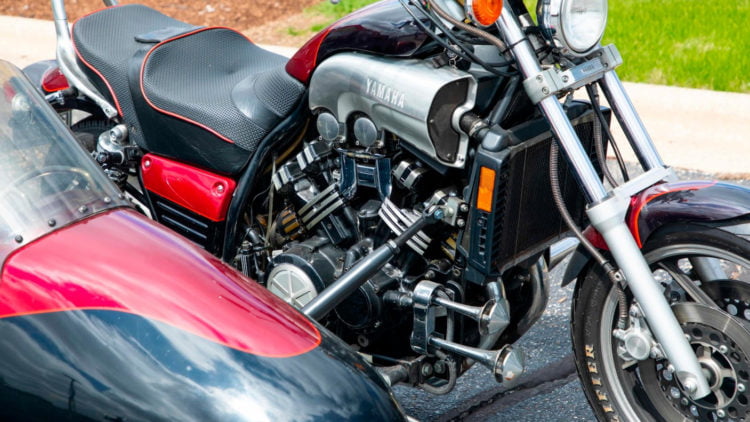 So, this ’85 V-Max for sale at the Mecum auction is a cool old bike, no doubt. But when you see it’s got a sidecar rig bolted on, you really have to wonder: What were they thinking? Maybe the builder figured the V-Max’s mighty engine was a good match for the added weight of the sidecar, and there’s some logic to that. If you wanted a fast sidecar in the 1980s, this was the ticket. But when you consider the V-Max’s rep for poor handling, and then add in a sidecar, with no apparent re-engineering of the V-Max’s front end, this surely would have been a scary machine to ride at speed.

Maybe that’s why it appears to be in such good shape—nobody wanted to ride it. The auction listing doesn’t mention the bike’s mileage, but it looks like it’s got more surface rust than actual wear and tear. The bike/sidecar combination looks good, at least, and it’s a good chance that’s why roadracer-turned-businessman Al Phillips originally bought it. Phillips was definitely an eclectic collector; although he had an obvious interest in Brit bikes (Phillips is a UK ex-pat), there’s a little bit of everything in the collection he’s selling at Mecum. As per Mecum’s original write-up, “Phillips’ varied selection of two- and three-wheeled machines will demonstrate that, to him, it didn’t matter what country built it; if Phillips liked a motorcycle, he bought it.” 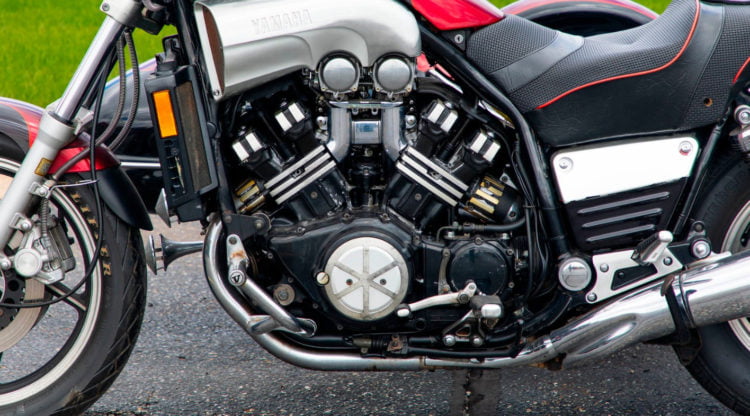 Some surface rust evident, but overall, this rig is in very good shape.

It seems he liked sidecars, because there’s also a 1979 Moto Guzzi V1000 sidecar rig in the lot, and a 1937 Moto Guzzi GTS500 sidecar setup. Chances are, those will sell for a lot more than this V-Max, because they’re probably more collectible. But, those bikes wouldn’t have 145 horsepower between them, either; if you want a melt-your-face-fast sidecar that will probably destroy you at the earliest opportunity, this Yamaha is your ticket.