Know what’s awesome? Superbikes. Know what’s hard to fit onto (if you aren’t a humorless Spanish midget roadracer)? Superbikes. So what’s a person to do, if you want a fire-breathing four-cylinder engine but your body doesn’t fold into the cramped quarters of a race replica?

Back in the ’80s, the answer was to take that four-cylinder engine and put it in a cruiser chassis. From such an unholy union, the Kawasaki ZL1000 Elininator was born, like this example for sale in the UK.

This sounds mad now, but it wasn’t so cray in the 1980s. The Big Four had been doing this sort of thing since the 1970s, starting with Kawasaki’s KZ900 LTD. Before they developed their own V-twin powerplants, the Japanese simply stuffed their existing engines into cruiser frames, blessing us with such hits as the Yamaha XS1100 Special, the Honda CX650 Custom, and so on.

Results were mixed. The Big Four sold a lot of them at first, but Harley-Davidson used a mix of masterful marketing and political pressure to swing the sales sheet back in its direction, and for the most part, these bikes were dying off by the late 1980s, in favour of American-style cruisers. 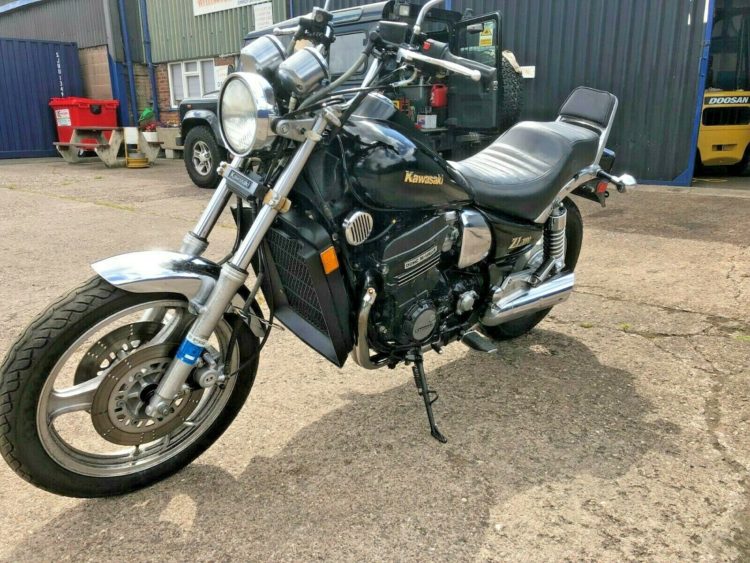 Like now, there were some people in the ’80s who wanted a cruiser, but would never buy a Harley-Davidson. The ZL1000 Eliminator was a solid choice for those customers. Photo: eBay

However, there were some people who would never buy a Harley-Davidson, but wanted a cruiser. There were other buyers who wanted a cruiser, but wanted more power than the MoCo could offer. Yamaha picked up on that, and brought out the V-Max. Kawasaki countered by doing something that today would be unthinkable: it started the Eliminator series of cruisers, which featured retuned versions of its four-cylinder sportbike engines.

Different markets got different machines under the Eliminator name, but the two most interesting are probably the ZL600 series and the ZL900/ZL1000 series.

This ZL1000 on eBay is a rare machine, as Kawasaki supposedly only brought them into the US for one year, 1987. Although this bike is in the UK, the seller says it was originally sold in the US.

The ZL1000 shared its engine with another famous Kawasaki recycling project, the original Concours. With smaller carburetors and some top-end tweaks, it was rated for 100 hp, instead of the 125ish horsepower of the Ninja 1000R. However, the power was said to be much more usable for street riding, with less peaky delivery and more low-down torque. While that might not be as impressive on the spec sheet, it’s much better for riding stoplight-to-stoplight. 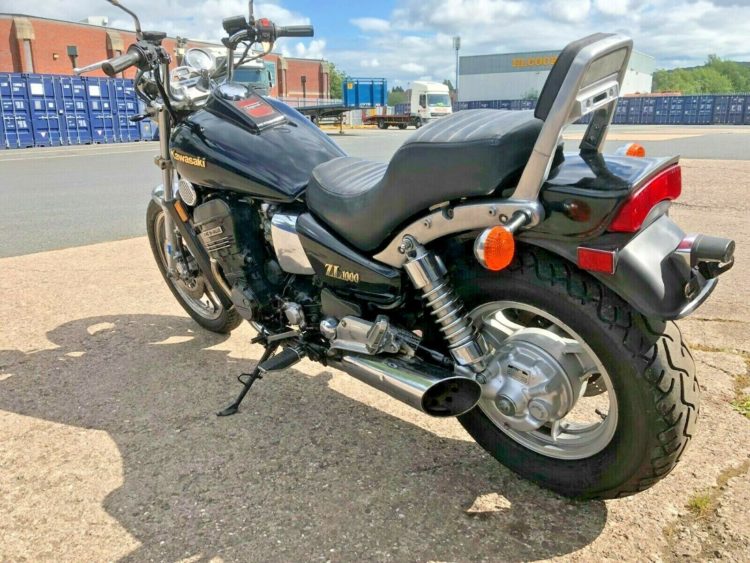 That shaft drive, though! For everyday use, this was a major improvement over the superbike version of this litrebike. Photo: eBay

Another major difference from the sportbike version of this engine was the shaft drive, which cut down on driveline maintenance.

The styling itself was more or less classic cruiser lines, as opposed to the earlier ZL900 Eliminator, which went for more of a muscle bike look (intended to battle the V-Max). There was still a stubby exhaust can, though, and cast wheels that had a sporty look to them.

Depending who you ask, these are either brilliant bikes, or absolute pieces of crap. A lot of people thought these machines were a step backwards in moto design, both mechanically and stylistically speaking. Other riders compared the ZL1000’s performance to its V-twin equivalents and relished the extra power and better braking. It took years to get to the point where most V-twin cruisers had 100 hp, and even now, many smaller cruisers are well below that number.

The people who liked these bikes tended to regard them as excellent real world motorcycles when compared to their superbike counterparts, even though the handling and performance obviously wasn’t as sharp. But despite the fans, sales weren’t strong enough to keep the Eliminator in production, and the V-Max ended up being the final survivor of this era of big-bore Japanese cruisers. Although smaller cruisers are still made without V-twin engines, the Japanese decided to focus on copy-catting the American cruiser formula. They did so successfully for many years, before a renewed interest in outlaw biker gangs (thanks for nothing, Sons of Anachy!) and the 2008 financial recession combined to torpedo the Japanese V-twin market. The Big Four all have cruisers in their lineups now, but they aren’t the focus they once were.

While the bike’s pretty clean overall, you can see scabs here and there, and other photos in the eBay ad show the tank fuel fill bezel is a mess. Photo: eBay

So about this bike for sale in the UK: Is it a good buy?

Judging from the eBay advert, it looks mostly extremely clean, although a few parts seem to have attracted some scabby rust. However, the bezel on top of the gas tank has obviously been buggered up.

With that in mind, the £3,295 asking price might seem a bit high, but then again, there’s always the “Make an Offer” button. And if you really want a ZL1000, it’s not like there were many of these machines to start with, and they’re even harder to find now. Nobody’s really making anything similar; if superbike engines get repurposed, they’re thrown into adventure bikes, or naked bikes, or tourers, certainly not cruisers.