We’ve said it before, but it’s worth repeating: If you want to buy a used motorcycle, the ADVrider Flea Market is a good place to start looking. You’re buying a bike from someone who you can check up on, sort of, through the forum. The sellers are probably not out there trying to rip off other forum users. If they’re ADV enthusiasts like you, chances are the bike will have a few farkles bolted on already. And, best of all: You can find machines that are fairly rare in the “real world” outside the forum—machines like this 1988 Honda Dominator NX650, for sale in the US.

Savvy ADVers know the Dominator isn’t actually that rare in some markets, but for some reason, the big single didn’t sell well in the US. Honda imported it to the American market in 1988 and 1989, and then cut it from the line. In other countries, its production run lasted until 2003. What’s up with that? Why did Euros love the bike so much, when Americans weren’t keen on it? 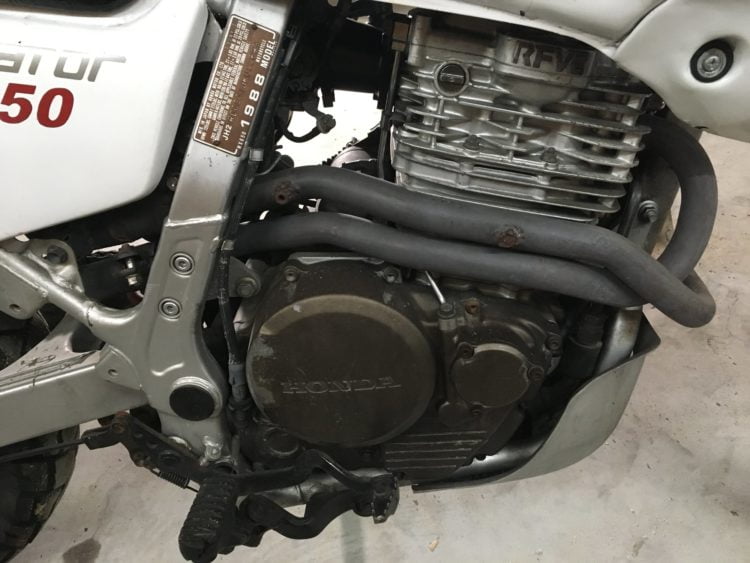 You can count on Honda to have a weird exhaust setup. Photo: hwy61

There are multiple reasons, no doubt, but here’s the man reason: European riders were hip to adventure bikes before the US caught on. And, the NX650 is more of an adventure bike than it is a dual sport. It was made for all-weather travel on crappy roads, not for blasting through SoCal sand dunes. When it came to popularity across the pond, the BMW GS (and G/S) had already proved to be a strong seller, and Honda was selling to customers who knew what the ADV scene was about.

Here’s what you got with the NX650. It was the biggest machine in a line of similar single-cylinder machines, all bearing similar bodywork (see also: Honda NX125, NX250). The 650 had an air-cooled motor based on the XR600R, bored and stroked to 644 cc, and with a four-valve head. Honda included a gear-driven counterbalancer, which helped reduce engine vibration, especially when compared to the other buzzy singles of that era. Like other singles of that era, it had a five-speed gearbox. It was rated for 44 hp at 6,000 rpm and 53 lb-ft of torque at 5,000 rpm. Although today’s hot singles make a good 30 hp more than that, this would have been very decent power in 1988, especially as much of the competition was still 600 cc or smaller. The NX had electric start, too, unlike the competition. 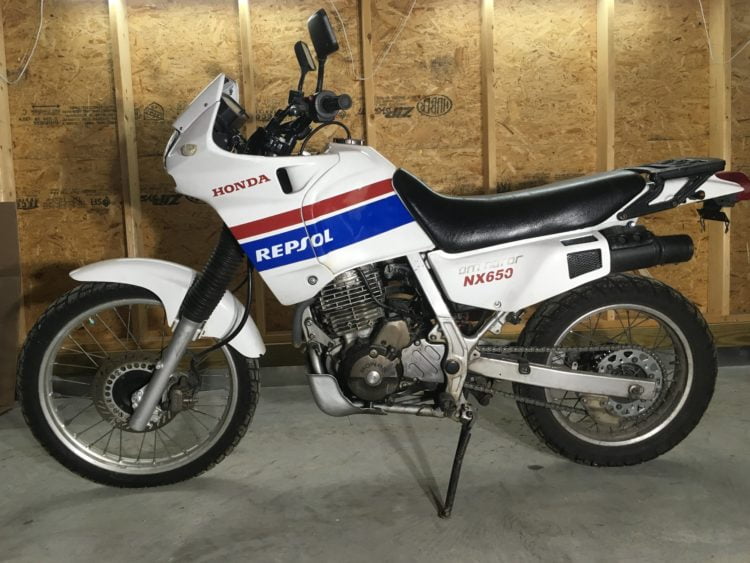 A few nicks and scrapes, but a pretty cool old machine. Photo: hwy61

A few years later, the NX’s engine was put into Honda’s XR650L, which is still sold in the US today, so you know it’s long-lasting. You also know that it can last 100,000 miles if taken care of, and far, far less if you don’t keep an eye on the oil level. Even if you maintain the engine with the regularity of a fascist railway executive, it’s still probably going to burn oil if you run it at high speeds for extended periods of time. It’s just how these big air-cooled singles roll.

Like the XR, the NX650 had a funky exhaust setup, with dual headers feeding into a two mufflers. No doubt there was some engineering ideas behind this, but it looked odd in 1988, and still does now.

While the engine was decent, the rest of the bike was budget-oriented. The front suspension was non-adjustable, but at least it was beefy enough, with 41 mm leading-axle fork. The preload-adjustable rear shock got the job done, too. The subframe had a rep for weakness, like just about every other Honda dual sport since. Run soft luggage, and don’t overload the bike, and those problems will be far less likely to bite your butt. At least that cheap steel frame is easy to fix, or reinforce. 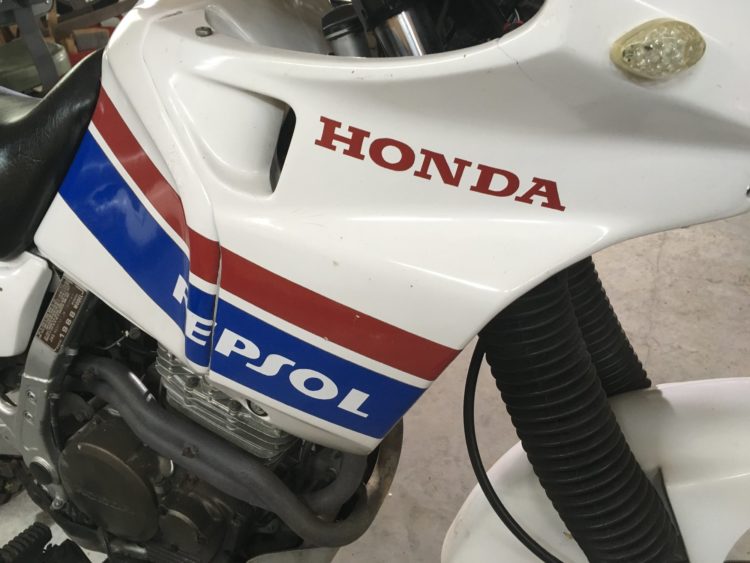 The bodywork wasn’t as bulbous as larger adventure bikes, meaning this machine offered less wind protection, but was also smaller and a little easier to throw around offroad, at least in theory. Honda put a 21-inch front wheel on the bike, which implied decent capability in the dirt—but the low-mount front fender was an obvious indication that this machine wasn’t really made for bashing through swamps. It came with Bridgestone Trail Wing tires, much-maligned over in DR650 Land as “Death Wings.” It’s true, they aren’t super-grippy in the slippy, but at least they’re long-loved, and they’re OK on dry gravel—which is where this bike was supposed to run. If you want to ride single-track, buy an XR.

The particular example for sale here is in Maine. The seller says“I have the title issued to the former owner from S. Carolina signed over to me. Here in Maine they do not issue titles on antique cars or bikes. With a bill of sale and an affidavit you register the bike and that acts as title here in Maine. I’ll post the former title. Bike will be sold with a bill of sale and I’ll hand along the former title.” Sounds straightforward enough, but if you have other questions, contact seller hwy61. Asking price is $2,700 after a price drop.