For the past few years, the 650 class of dual sport motorcycles has basically died, with the 250 class moving into that space. Honda brought in the CRF250L and CRF250 Rally, Kawasaki brought in the KLX230 and updated the KLX250, Yamaha updated the XT250, and Suzuki … well, uh, Suzuki’s still making the DR200, same as Yamaha’s still making the WR250R and TW200. Maybe the VanVan 200 counts for Suzuki?

The point here is, the Big Four appear to have settled on the 250 class as the future of dual sport motorcycling, which disappoints a lot of riders who are looking for more from their bikes. All those bikes feature fairly dated technology, except for maybe the WR250R (which is still an 11-year-old design at this point), and will never leave the rider breathless with rocketship-like acceleration.

Why is this? Maybe because the last time someone made an effort to make a truly decent 250, it was a sales flop. We’re talking about the Honda NX250 Dominator, a bike that was truly ahead of its time, and still has a lot to offer, 30ish years after its introduction. They’re an interesting bike, and this ’88 model for sale in Georgia caught our eye.

The view from the rear. Looks clean! Photo: Cycle Trader

The NX250 is no stranger to many ADVers, as there’s quite a bit of information about this bike in the Thumpers forum.

However, it’s a complete unknown to many others, because you rarely see them on the street or trail. This is because although Honda did get a bunch of things right with this bike, they also got some important things wrong.

Let’s start with what’s right. The NX250 was liquid-cooled, when most of the competition was still air-cooled, even the larger-capacity duallies. Honda also managed to cleverly hide that radiator, improving the bike’s looks and making it harder to break. There was a DOHC top end, as opposed to the SOHC found on most 250s of its day. The gearbox was a six-speed, when most of the competition had five-speeds.

The NX250 had a Nikasil-plated bore, which meant it took forever for the pistons to wear things loose. It had extremely long valve adjustment intervals (24,000 miles, after the initial 600-mile break-in!). Power was a claimed 26 hp at 8,600 rpm, certainly respectable in this class. The current Honda CRF250L is still only rated for under 25 hp. 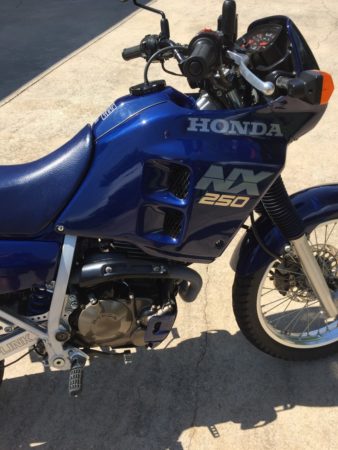 Does that fairing work, aesthetically speaking? It’s less hideous than a lot of the current naked bike production from Japan at least. Photo: Cycle Trader

Styling is always debatable, but the fairing certainly would have endeared the bike to those who lusted after an Africa Twin but didn’t have the money. The bodywork was a stark departure from the stripped-down aesthetic that typified the era’s dual sports, and would provide minimal coverage from the elements.

The front brake had a two-piston caliper, better than some of the bigger duallies of the ’80s. The machine had electric start (most of the 250 competition still had kickstart). Even the stock tires (Dunlop Trailmax) were reckoned to be decent.

So why didn’t these sell? As always, pricing and economy and all that came into play, but here’s what’s wrong. The NX250 had  8.7 inches of front suspension travel (same as the modern CRF250L), and 7.9 inches in the rear (about an inch less than the CRF250L). And, the forks and shock were reckoned to be crap in their day, at least as far as off-roading went.. Three decades later, that opinion hasn’t changed.

The bad suspension was combined with a 19-inch front wheel, which isn’t terrible for an adventure bike, but not ideal for hard off-road use. The rear tire was an oddball 16-incher, certainly not a standard duallie size. And, the rear end featured a drum brake, which certainly didn’t match the rest of the machine. Fuel capacity was only two gallons, and the bike’s fairing made upgrading the tank a challenge. 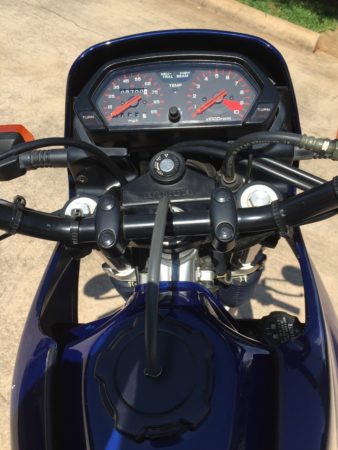 A simple cockpit, but at least it’s got a tach. Photo: Cycle Trader

So, buyers were left with a dual sport that was technologically advanced, but not that great off-road. The NX250 would make a good quarter-liter adventure bike if you were more focused on road work, and easy gravel, but then you ran into the “it’s only a 250” problem. Who wanted a 250 when there were so many 650s and even a few 350s to choose from?

The long NX250 thread shows that  some riders were still interested enough to put their money down, and Honda even offered an even higher-performance version of this bike in some markets, the AX-1, which featured a high-compression engine making a claimed 29 hp!

Depending who you ask, and where they’re from, you’ll hear Honda produced the NX250 as late as 1993 in some markets. But in the USA, it was discontinued after only three years, selling 1988-1990.

That’s a bummer, as the NX250 really was a unique machine in its time, and despite its drawbacks, no current motorcycle has quite nailed its formula, although the CRF250 Rally comes close in some ways and exceeds in others. The trouble was that in the 1980s, the world wasn’t ready for a 250 adventure bike.

So what about the bike for sale in Georgia?

At $3,200, it’s pricey. The odometer seems to have a low reading, although that’s not always accurate and certainly doesn’t indicate how well something was maintained, or how hard it was used. This bike does look like it’s in good shape, though, especially for an on/off-roader that’s survived for 31 years. Great deals on these machines are hard to find, because there are so few of them. Still, perusing the forum will find sales for less dough than this, although that does you no good if they’re already gone, or those bikes are too far away.