Picture, if you will, a dimension of frustration.

This dimension is full of frustrated youths, kids who want their driver’s licences, but aren’t old enough. Sure, they could ride a bicycle, but it’s inconvenient, or it would take too long to get where they want to go. They desperately need motorized wheels, but in their jurisdiction, they have to be 16 years old to drive, and even then, they’re only a beginner. They’ve got to find a licensed driver to accompany them wherever they go.

We can call this dimension “The Moped Zone.” These are the 14-year-old kids who are stuck riding scooters everywhere, while they save up for a “real car” (the horror!). And if you want to escape The Moped Zone, there’s no better vehicle than a Yamaha DT50—like this model, from 1988. It’s currently for sale in Medford, Oregon, for the optimistic asking price of $1,999. 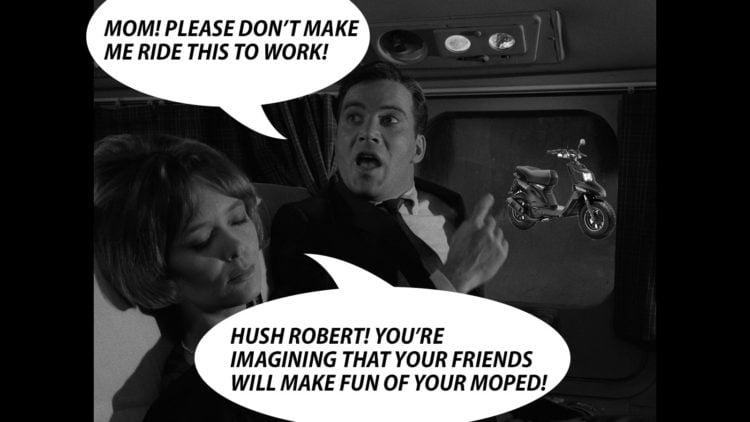 The DT50 offered escape, for kids who didn’t want a dorky scooter.

The DT50 was powered by a liquid-cooled single-cylinder 49cc engine. In its 1988 edition, it should have made around 7 horsepower at 7,000 rpm, although the seller’s Craigslist ad puts that in question—sounds like the bike’s been restricted, or maybe it’s just well-knackered. It is an 30-year-old two-stroke, after all.

Either way, the DT50 came with a six-speed gearbox and a manual clutch, like a proper motorcycle should, and unlike most scooters on the market. Yamaha made various DT50 models; look around the world, and you’ll see the bike in various trims, but overall, the mechanical bits usually look more-or-less the same. There’s an earlier air-cooled model; Yamaha went to liquid cooling around the mid-’80s (in 1987, far as I can tell, but the date likely differs depending which market you’re in). The liquid-cooled engine is no doubt still in production, and still on the market in some developing countries with less-stringent emissions laws. Larger DT models are certainly still available in island nations around the Caribbean, or at least they were the last time I was down there.

Anyway—7 horsepower isn’t a lot, but it’s better than pedal power, and having a clutch and gearbox means you’re still getting a full riding experience with the mini DT. With an auto-injection system for the two-stroke oil, you didn’t even have to worry about pre-mixing your fuel. And, like any two-stroke, if you knew a thing or two about tuning, or you weren’t afraid to bolt on a big-bore kit, there was plenty of potential with the DT’s engine. Even in stock form, it would wheelie. Top speed was around 90 km/h (55 mph), although you likely wouldn’t be pulling that on a steep uphill. 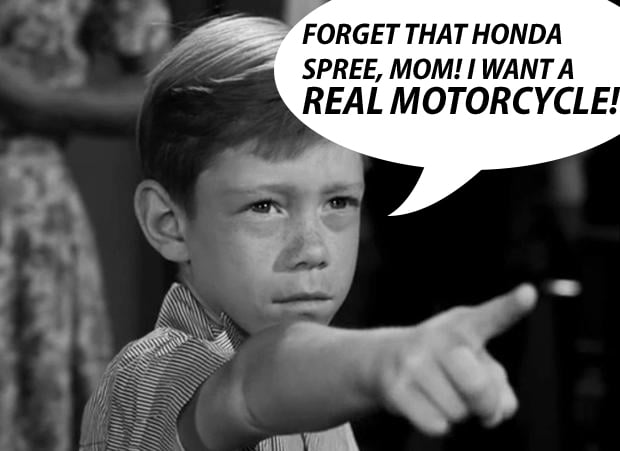 The DT’s light weight means it’s appealing to older and younger riders both.

The DT50’s engine was doubtless more zippy than a wimpy scooter, but that wasn’t the end of the fun. The DT50 was a legit, street-legal dual sport motorcycle, with signal lights, headlight and tail lights. You could handle any city street you wanted, and even some secondary roads. But when the pavement ended, you could keep going, thanks to a 19-inch front wheel, and 17-inch rear. No more worrying about making it over bumps with your Vespa’s 12-inch wheels!

This wasn’t going to set your local MX track on fire, but for a lightweight rider, you could still have plenty of fun. With basic drum brakes front and rear, and weedy telescopic forks (Yamaha had a “Monocross” shock in back), the bike was limited. Compared to a scooter, though, the DT50 was a go-anywhere beast! The DT50 even had advantages when you lined it up against other two-stroke 49cc motorcycles, like the competing Honda MB5. Sure, the MB5 had a decent reputation for toughness, and arguably looked better, but it wasn’t designed to ride off-road. The DT50’s dual nature set it far ahead of all the other machinery in this 49cc segment. 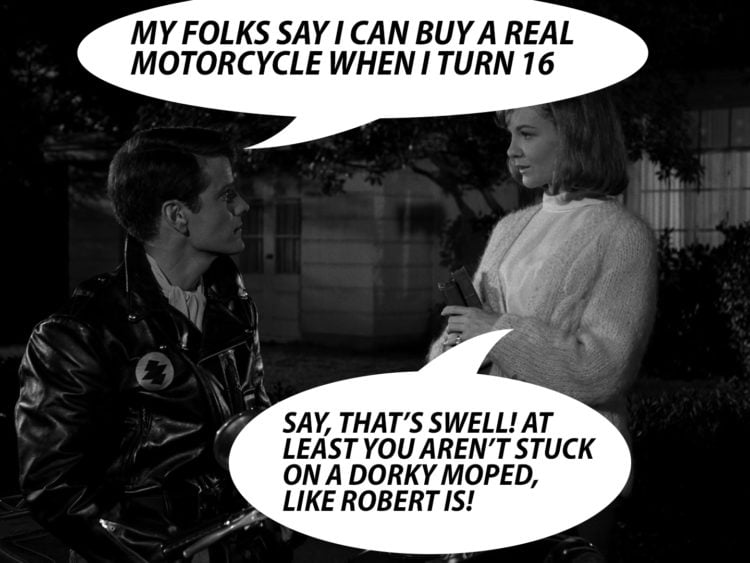 The DT50 is the perfect machine to learn riding skills, while you wait for your full licence.

THE BIKE OF THE MEEK

So, a small-cc two-stroke duallie is fun and all that, but who’d want one? Easy—anyone who wasn’t allowed to ride a full-sized motorcycle. In many jurisdictions, you can ride a 49cc “moped” without a full motorcycle licence, as this Craigslist ad points out: “You need not have a motorcycle endorsement to ride this bike!” In many areas, you can get your moped licence at 14, maybe even younger, so this is a chance for young teens to have a dual sport bike without waiting until they’re 16.

It also makes a lot of sense as a trailer hitch bike, for RVs in particular. Again, in many jurisdictions, you can ride a 49cc “moped” with only your car licence. The DT50 can serve as a practical runabout, with no need to take a motorcycle safety course. Mom doesn’t want to throw her leg over a DR650 seat every time she wants to putt-putt up to the camp office, or over to her friend’s Winnebago. She wants a simple, un-intimidating bike that needs no extra certification.

But there’s another market for the DT50 that’s often overlooked: Some people can ride this bike, but not anything else, because of their physical condition.

I had a friend who put a lot of miles on an older DT50 for this reason. Rear-ended by a car, he landed with a broken back and a doctor’s diagnosis: A lifetime of no more motorcycling. But my buddy was a lot stronger than the doctor gave him credit for, and he also had a secret weapon.He owned an easy-to-ride Yamaha DT50.

For months, that DT was his only ride, as he recovered from his injuries, and recover he did. He’s got a big collection of bikes, and rides whatever machine he jolly well pleases now. But, he’s told me more than once that out of his collection of quirky Euro and rare Japanese machines, the DT50 will be the last to go. It’s the easiest machine to ride, and it’s the bike that got him through.