You hear a lot these days about how the motorcycle industry is Making Small Sport Bikes Great Again. And sure, the Honda CBR250 definitely kickstarted a new wave of fun, affordable motorcycles, with up-to-date features like ABS and EFI, but in many ways, those machines pale in comparison to the small-capacity screamers of a few years back. Machines like this ’89 Yamaha RZ350, for sale in Canada.

You could probably point at the original Yamaha and Kawasaki 350 two-strokes of the ’70s as performance budget bikes, but there were still issues with those machines, especially the Kawis. But by the ’80s, the Japanese had figured out how to build a proper motorcycle chassis, and how to make an engine take a thrashing and survive, even a two-stroke.

We got some very interesting small-capacity race-reps in that decade as a result, including the two-smoker Honda NSR250 and the four-stroke Suzuki GSX-R400 (not seen very often in North America, more common in other markets). But one of the real classics of the era was the Yamaha RZ350 series.

The RZ series was really just the natural continuation of the RD line. In many ways, the bikes were groundbreaking, but not necessarily for all the reasons, we’d like.

What you got was a two-stroke liquid-cooled parallel twin, with 64 x 54-mm bore/stroke, making 52 hp at 8,750 rpm. That still eclipses a modern Ninja 400 by almost 10 hp. The engine used a variable-height exhaust port to broaden the powerband, and avoid the peaky on-off power delivery that typifies many two-stroke engines. The vibration was present, but as the engine was rubber-mounted, it wasn’t bad.

Racing insiders claimed that with some tuning, you could make 65 hp without blowing up the engine, but pushing it further than that was inviting disaster.

The ’85 version was supposedly the first RZ350 model sold in the US, and was supposedly the first machine in the US with a perimeter frame. There were different versions sold around the world, but the US got a bike with bellypan and cafe-style fairing. Not full superbike plastic coverage, but definitely sporty, and usable on-track, and other versions with full fairing were also available if you looked around,like the bike for sale in the ad linked above.

The RZ350 was not only the first US bike with a perimeter frame, it was also the first bike that came with catalytic converters to clean its emissions, which ushered in an era of continually tightening emissions laws that have frustrated motorcyclists ever since. That can be good or bad, depending on your viewpoint, but the RZ was one of the first victims of the emissions rulings, as Yamaha decided it needed to put resources elsewhere and stopped bringing the RZ350 into the US after ’86.

However, the good citizens of Canada had no real problems with smog back in those days, as there were still more moose than people, and every year as they shoveled their driveways, they begged for global warming. So, Canada didn’t get the same emissions laws until much later, and as a result, the Canucks kept bringing the RZ350s in, and started racing them extensively. Not that they weren’t raced in the US, but in Canada, they built whole series around them. Notorious fast guys like Steve Crevier and Miguel Duhamel started their roadracing careers on the RZ350.

So, that explains why this 1989 machine is for sale in Port Hope, Ontario, Canada (just across the lake from Rochester, New York, basically). Even though America didn’t bring them in at that point, Canada did, and if you wanted to go up and check this bike out, you might even be able to bring it back. Maybe. As long as Al Gore didn’t stop you at the border with a team of crack enviro-commandos. Make sure your paperwork’s in order, and if you see any environmental activists suspiciously eyeing the bike, get out of there! 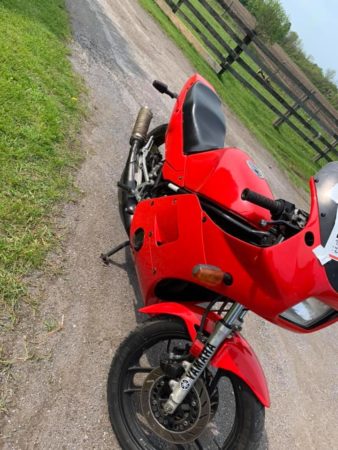 Definitely not a factory paint job.

The seller says it has a new paint job (duh!) and a fresh top end (hrm!). That could be good, or bad. The new paint job might have resolved a messy exterior, or could be hiding race livery. The fresh top end might have been done by an expert, or could have been a bodge job. It is worth noting that Port Hope is not very far away from Shannonville Motorsport Park, and if these things have a home turf, it’s the track at Shannonville.

But let’s face it. If you want a street-legal two-stroke, you’re going to have to pay to play, and you’re probably far better off with this Yamaha than with some exotic European machine, especially since the Yamahammer is still easily kept alive due to the extensive knowledge base on this bike, and the parts support from Yamaha itself (many Banshee ATV parts fit, supposedly) and from the aftermarket.