In case you haven’t noticed, small-capacity sportbikes are hot right now. While it was the 600 cc class that attracted entry-level buyers in the 1990s and 2000s, the 250-400 cc class is where it’s at. Roadracing series are seeing their most interest, relatively speaking, in the 250-400 class. It’s all thanks to Honda’s CBR250R, which forced Kawasaki to improve its own Ninja 250, kicking off the biggest arms race in modern motorcycling.

But, we’ve been here before. Decades back, the 250-400 class was hot stuff, with the Japanese battling for sales in this segment. The difference is that in the late ’80s and early ’90s, the 250-400 class saw some bikes that had very up-to-date technology for that time, instead of the recycled, weak-sauce designs that we see now.

One of the best examples is the Suzuki GSX-R400 series. Everyone remembers the 1985 GSX-R750 as being the first truly modern Japanese sportbike, but the Gixxer 400 was the first machine to really qualify when it was released in 1984. The 400s weren’t a big thing in North America (mostly they arrived as grey market imports), but they had a strong following in the Japanese domestic scene and other overseas markets where the roads, and riders, and their egos, were smaller. 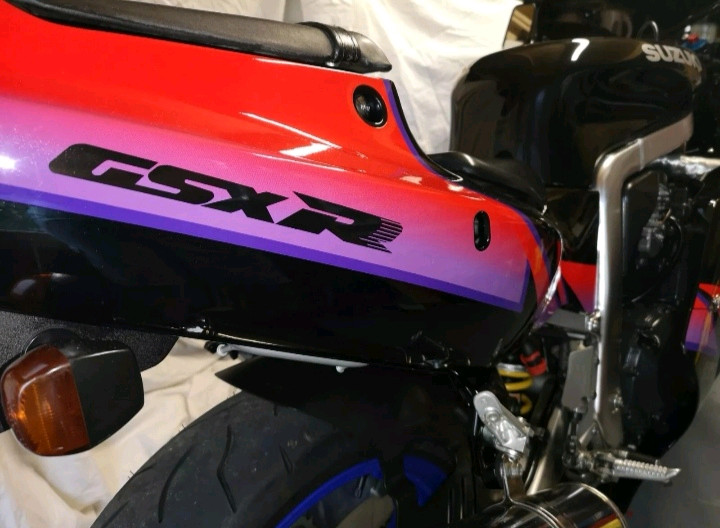 Bodywork has been repainted and appears to be in good nick. Photo: Gumtree

How important were these models? Consider that after it came out in ’84, the GSX-R400 was given a serious update in 1986, then again in 1988, and then again in 1990. The final update came in 1993. These days, Suzuki doesn’t even update some of its models every two decades.

This bike for sale in the UK is a 1991 edition, and as such, is considered a more sporty machine than the earlier models. While the ’80s GSX-R400s may be highly collectible (and good-looking, if you approve of the endurance race replica aesthetic), they were still a work in progress, which partly explains the constant updates. This generation of the Gixxer Four had a water-cooled inline four engine, with six-speed gearbox. It had a slightly longer stroke and smaller bore when compared to earlier models, although horsepower was basically the same. That makes sense, as displacement didn’t really change, and these bikes were considered to be machines for those on restricted licenses, despite their competence.

What was a significant improvement was the suspension. This 1991 model (or is it a 1990? the ad says both …) features a set of proper USD forks. That was very sporty at the time, and even now, some entry-level sportbikes don’t have inverted forks. The forks are only adjustable for preload, but that rear shock should be fully adjustable. You’ll probably want to do some tinkering with the settings, or even better, find someone competent to help you get the adjustments right. Figuring out the suspension is one of the keys to truly enjoying these bikes. 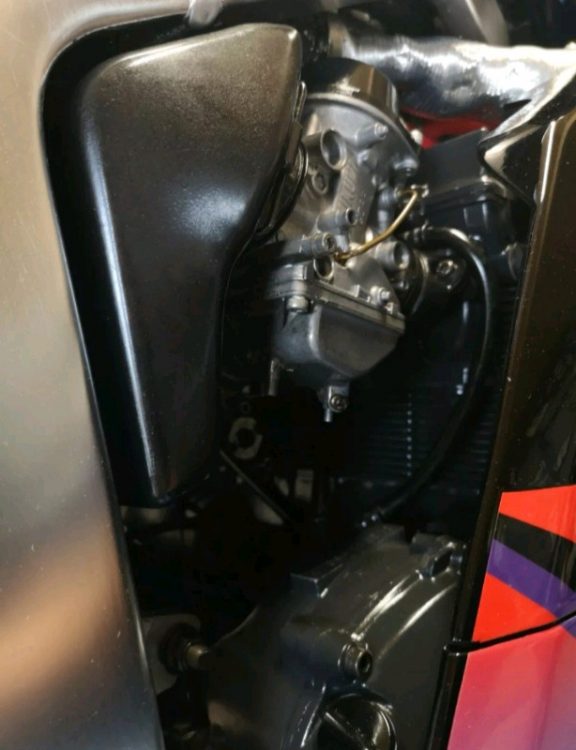 Those carbs have been restricted, but an enterprising mechanic could fix that soon enough. Photo: Gumtree

This machine has an aluminum frame, and should also have a steering damper. That’s something you’d never see in a comparable machine today, and you also wouldn’t likely get the same screaming high-end performance. The GSX-R400 was sort of wimpy below 6,000 rpm, but once you got into the higher revs, it would rip all the way to the 14,500 rpm redline (as long as your bike was derestricted—this one isn’t). Peak output was supposedly 60 hp, with 40 Nm of torque.

The looks, of course, were a dead-on takeaway from the bigger Gixxers of the time. It wasn’t just a bit of clever packaging; the relationship between the big-bore sport bikes and these smaller machines was much closer than it is today. The 400s were physically smaller, though, and larger riders might find the cockpit a bit cramped. That’s the price you pay, if you’re buying an old-school compact sportbike. Its weight and overall dimensions are roughly the same as comparable models from today, but with more horsepower; compared to larger sport bikes of its era, the 400 is a real bantamweight.

This machine for sale in the UK does seem to have been taken care of, and the odometer (if the clocks can be trusted) is fairly low, at 8,866 miles. For UK buyers, it’s just passed its MOT, which is good until April 2020. The bike isn’t in mint, original showroom shape; the ad says it’s been painted and has a few nicks due to its age. However, it’s been “thoroughly valeted, waxed, polished and weather protected” by a motorcycle detailing service, which would no doubt help sell it to a collector.

Pricing, at £3,000, definitely means this bike makes sense for someone who’s into vintage machines, as you could get a newer, bigger bike for less money (a used RF900R will set you back half that amount in the UK). But the person who buys this bike isn’t just looking for a cheap ride; they’re looking for a machine from a specific period of motorcycling, a machine that just isn’t that common anymore. It might even hold some interest for North American buyers, as it would be fairly easy to import, as long as you didn’t mind spending a couple of grand on airfare.