Welcome our 4 Sale series about interesting, unique or weird bikes for sale online. Note: This is not an advertisement. ADVrider is not affiliated in any way with either the seller or marketplace. Do you know of any unique bikes for sale? Let us know by filling in this form.

While Honda is usually the manufacturer that brings out a great motorcycle with terrible timing, Suzuki followed Big Red’s example in 1994, by introducing the RF900R sport tourer. Even now, people wonder exactly what Suzuki was thinking. With the GSX-R lineup selling like mad in the mid-90s, and the Katana models picking up more sensible sportbike sales, what would be the point of bringing in a third sportbike line?

The machines had unique styling with big vents on the sides of the fairings that recalled the louvers on a Ferrari. But underneath that skin, the technology was not cutting-edge. The RF400R used an engine from the GSF400, and both the 600 and 900 re-used the bottom end out of the legendary GSX-R1100, with new top ends fitted. The 900 seen here is basically a GSX-R750 top end fitted to a GSX-R1100 bottom end.

Of course, this sort of game was nothing new to Suzuki, who’d been legendary for raiding the parts bin for new models for decades. However, it didn’t exactly fit into the crazed development programs of the 1990s. It fits much more into the budget-conscious scene we see today, where everyone is re-using engines, wheels, whatever they can, to save cash. 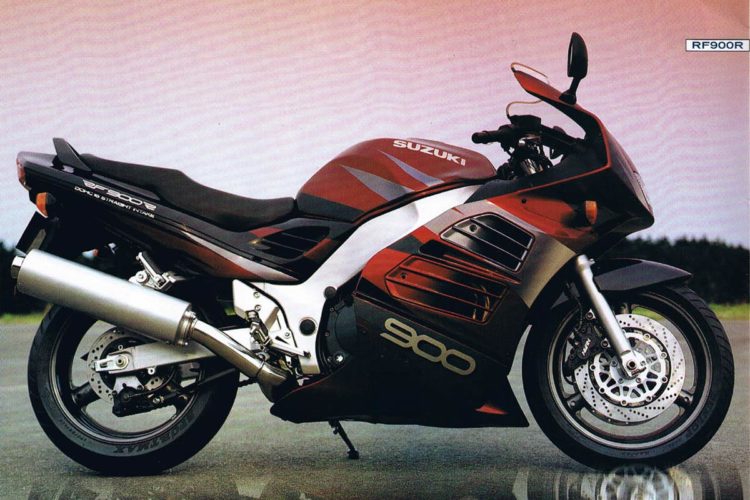 Could you get a more ’90sesque advert than this? Nope, you could not. Photo: Suzuki

Still, you couldn’t really argue with the results in the ’90s. The RF900R made a healthy 135ish horsepower at the crank, or at least that’s what Suzuki claimed. As such, it wasn’t exactly in line with the fastest litrebikes of its day, but that was never the intention, and that’s still enough horsepower to exceed any posted speed limit by a healthy margin—or haul you, your sweetie, and a light load of luggage across the country at speed.

Because that’s where Suzuki sort of slotted this machine: in the sport-touring role. The RF badge supposedly stood for a blend of performance and touring capability, not “Really Fast,” like its fans used to brag (or, more realistically, “Rattly Fairings,” at this point in the bike’s life). Although these machines were available with a race package in Australia, their circuit usage was mostly restricted to track days around the rest of the globe, with their riders focusing on using them in the real world.

However, for a sport-tourer, Suzuki made it somewhat difficult to put down hard miles, as these bikes never came with factory luggage, and even aftermarket options are rare and expensive. Then there’s the riding position: it’s best-suited to shorter riders, unless you feel like modifying the footpegs and bars to suit your body’s dimensions. It’s not actually that hard to do, as some V-Strom bits will fit, to make it much more comfortable. (Remember the Suzuki parts bin engineering? It means many, many diverse bikes have interchangeable parts.)

Later models had some suspension adjustment capability, but aside from that, there were no major changes to the RF line over the years. And after only five years of production, the RF900R was done after 1999. 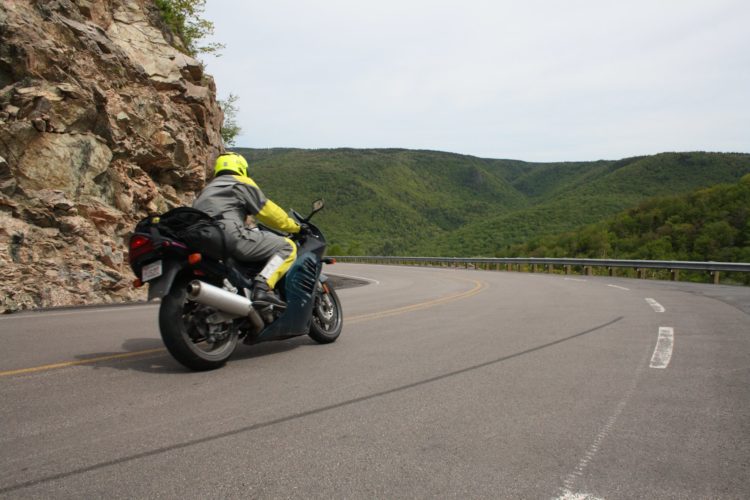 Although the RF900R has the legs for long miles, the riding position is cramped, and you’ll have to improvise your own luggage. Wolfman to the rescue, in this case. Photo: Charles Landry

So what about this particular version, for sale in Chariton, Iowa? Sadly, information is lacking, with just an odometer listing (38,000 miles) and a price tag. The plastics seem more or less okay (they’re available from Airtech, if you need replacements), but that front indicator sure looks like a replacement. But, haha, you’re in luck! The standard RF900R signals are easily swappable with DR650 indicators, DR350 indicators, and so on. Parts Bin Engineering Strikes Again!

The price tag seems a bit optimistic at $2,995 because these bikes are not generally expensive, even though they’re rare in North America. Look across the pond, and you’ll see them commonly sold on the cheap in the UK. They were never an expensive bike to begin with, relatively speaking, especially in the UK market.

So that raises two points: It’s hard to say whether this is a good buy without more details. And ultimately, if you want parts, you’d better make some friends in the UK. In the RF900R Facebook groups, you’ll see fairings and other bits and bobs sold at prices far better than you’d ever see in the US or Canada. The trouble is getting them across the Atlantic. If you think you’d like one of these bikes, even if it wasn’t the machine for sale in Iowa, I’d suggest you stock up on spares ASAP as there are fewer and fewer of these on the roads in North America every year. It’s not that the engines wear out. That four-cylinder is pretty under stressed when you figure it’s a 750 top end on an 1100 transmission. It’s that these bikes were built to ride hard, and we all know where that eventually leads.