Some bikes are known to be solid, reliable machines. Some bikes are thrilling to ride. Some bikes are visually appealing, and they look fast even when they’re standing still. When a manufacturer manages to accomplish all three of those goals at a reasonable price, they tend to have an instant classic on their hands. And, in the late 1990s, Suzuki came close – so very, very close! – with a new V-twin line. That line included the gorgeous, and hard-to-tame TL1000S. It was fast, it looked good … but reliability was far from the Suzuki standard, at least at first.

Why go with a 90-degree V-twin, when Suzuki had long been known for its solid inline fours? Because it was the late 1990s, and the Japanese companies were exploring new territory, inspired by successful European designs. There was money in sportbikes in those days, and the Big Four were all looking for an edge. Honda, no stranger to V-oriented engines (see also: VFR800, etc.) built the VTR1000 SuperHawk around this time period, followed by the RC51 starting in 2000. Suzuki’s take on the V-twin was the TL1000. It was intended to be a reliable option for someone who wanted an exotic sportbike, and in 1997, Suzuki introduced the all-new half-faired TL1000S. 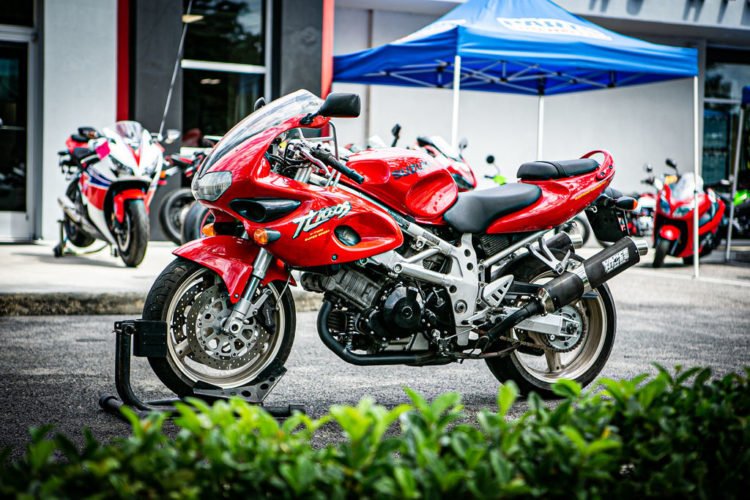 There an immediate problem, though: While the engine developed a solid reputation over time (more on that later), early versions had a bad reputation for unreliability. Contemporary reports were very impressed with the power. Although 125 hp and 79 lb-ft of torque (in the half-faired S model) doesn’t sound so wild now, it was pretty hot stuff at that time. But, the first production run had stories of gearbox problems, oil leaks, blown clutch pushrods and other tales of woe that frankly, are very unlike Suzuki. Apparently, changing from I4 to V2 production was not without its learning curve.

However, those problems with the engine were eventually hammered out. While the TL models were fairly short-lived in the lineup, the engine itself now soldiers on in the V-Strom 1000, and also served in the SV1000 (Cagiva and Bimota also built bikes around this engine). It’s got 20+ years of improvements, but it shows the basic design was solid.

And then there was the frame. Suzuki re-worked the GSX-R750 frame and stuffed the TL1000 engine in, or at least that was the story. Opinions on the results were varied. Some riders loved the chassis, saying it was a properly full-sized bike for taller riders. As for the actual handling, some riders loved it, but in its day, the TL1000 line had a reputation for being dangerous, thanks to its short wheelbase. So dangerous, in fact, that later versions of the bike were reportedly detuned to help riders keep everything in line. Any bike reviews from the late ’90s will talk about the machine being difficult to tame. These days, you hear a lot less of that complaining, and riders who still have their TL seem to have reconciled themselves to its handling. In some markets, the bike also had a steering damper fitted for later-production models, and no doubt that helped. However, one of the first things to check when buying a used TL1000S is the mounting bracket for the rear suspension, which was sometimes over-stressed and cracked. For a while, Suzuki would supposedly fix this problem for free, but who knows if your dealer would cover it these days. 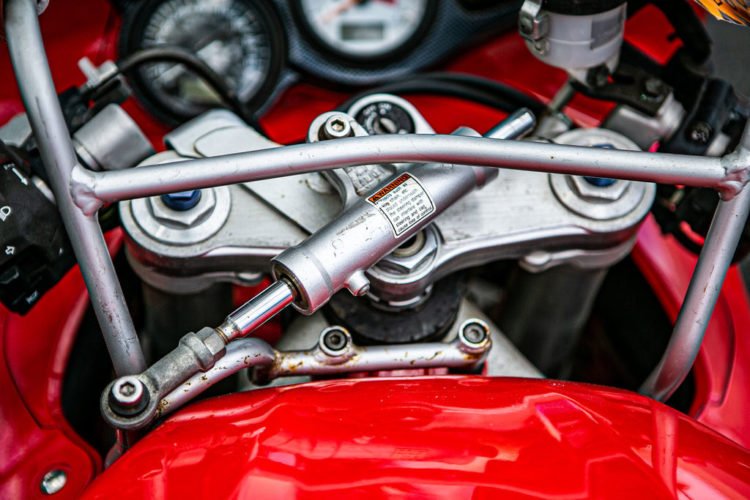 Looking a bit rough around the edges upon closer inspection. See that steering damper? That’s a bonus for the TL1000S, for sure. Photo: CycleTrader

Speaking of which, the biggest bugbear with the TL1000S was its rear shock. There was a rotary damper in back (an excellent technical article from the early days of the TL1000S is here). It was hot stuff at the bike’s launch, but quickly reckoned to be absolute crap on the S model. Suzuki built a slightly better version for the R model, but it also was deemed execrable. One of the first, and best, upgrades for these bikes is sorting out the rear suspension with a proper conventional shock. Alas, most boy racers will instead opt for aftermarket exhausts, under the assumption that louder = faster …

So all in all, the TL1000S was a bit of a miss for Suzuki. It sure looked fast, and was very exciting to ride, if you were OK with the handling; later versions with steering damper and upgraded rear shocks are still well-regarded. But the early reports of quality control and stability problems were enough to drive customers away, and the TL1000S was cancelled after 2001.

Suzuki knew it was on to a good thing, though, and continued its long history of recycling technology by introducing the SV1000 in 2003, using the same engine. The difference was that the SV didn’t have edgy tech like the rotary damper, and it was based on the very successful SV650 design, so customers were more at ease with the machine, and it never had the sketchy rep of the TL line. Eventually, the SV1000 was morphed into the V-Strom 1000, and you can still buy that machine today. 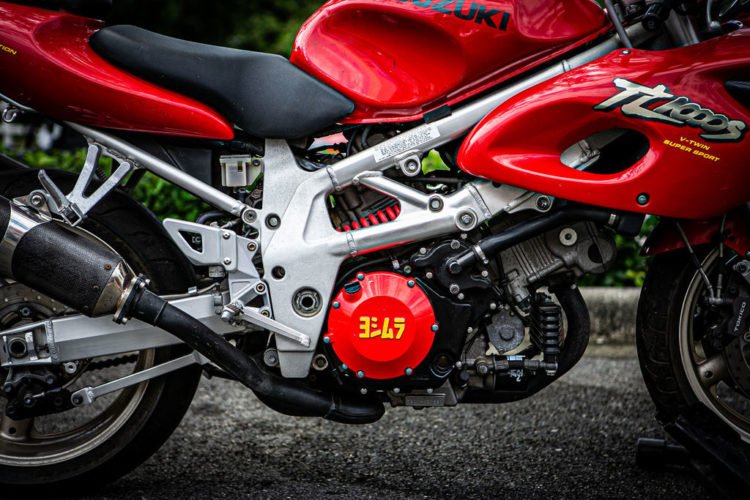 A short-lived model, with a long influence on the lineup Photo: CycleTrader

But while Suzuki’s 1000 cc V-twin has now powering naked and ADV bikes for almost 25 years, it’s never been quite as exciting as the original TL1000S. It’s unfortunate the TL had the problems it did, because it’s still a gorgeous bike today, and getting very hard to find. In my area, I’ve only ever seen two on the street, and was immediately in love on first sight.

It makes me almost willing to dare COVID-19, somehow smuggling myself to Florida, to buy this ’97 model. But I’d have some questions. What sort of rear shock is in the bike? Is the rear suspension mount in OK shape? And what work is needed? The ad says “RUNS GREAT BUT NEEDS TIRES, REAR BRAKES AND SOME TLC,” and look at the photos, the bike appears to have been ridden hard and put away wet. The fork seals are leaking, and there’s general gum, rust and crap stuck to the bike. Guessing, just guessing, but—this is one of those cases where the price might be about to go down, as dealers try to clear stock during the COVID-19 crisis, especially if you showed up and were ready to take the bike right away, instead of wasting time on the phone.