At the end of the 1980s, Suzuki was a company that needed a boost. It was still selling plenty of sportbikes, but in other categories, it was lacking, particularly in the dual sport segment. Yamaha, Kawasaki and Honda dominated the on/off-road scene with their XT, KLR and XL lines respectively. Suzuki had the DR200 and the DR600/650, but realized there was space for something in between. The lineup had room for a bike more off-road worthy than the 600, but more exciting than the DR200.

Honda and Yamaha had both been building duallies with 350 cc engines on and off for several year, and Suzuki figured hey, why not give that a stab? So over the final years of the ’80s, Suzuki’s engineers pounded out a design for the DR350. It wasn’t revolutionary, but it was an efficient repackaging of in-house design and proven technology. The engine looked a lot like the existing Suzuki 650 single, but scaled down, and with a 6-speed gearbox. An oil-in-frame design kept the lubricant cool and the sump compact. The suspension was nothing fancy, but with the help of MX guru Al Baker, Suzuki dialed it in to provide respectable-for-the-time performance. By 1990, the new 350 was available in showrooms, in a street-legal form and also in an offroad-only form that was basically the same thing, but with better suspension, pumper carburetor, and a streamlined light kit. 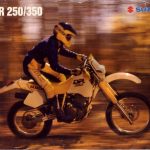 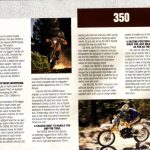 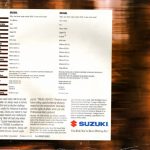 The new bike was an immediate success, because Suzuki had more-or-less hit the Goldilocks formula: the DR350 was “just right.” Compared to today’s street-legal enduros, it would be considered porky and underpowered. At the time, its claimed 33 hp and 286 lb wet weight were perfectly matched to riders who wanted to flog their bikes off-road, but still retain some capability on the streets. On multi-lane highways, the DR350 wasn’t so fun, but on a back road, it did the job just fine, and you could push the bike fairly far into the woods if you wanted. There were better bikes for single-track, but they weren’t street-legal.

Suzuki didn’t build this bike with the intention of dominating the racing scene, but these machines were raced. It was mostly club-level stuff, but the bike’s torque, reliability and rideability saw it entered in some extreme scenarios. Various Dakar competitors ran modified DR350s in the 1990s. Patricia Watson-Miller (then Patricia Schek) took a DR350 to second in the women’s category at Dakar (she’d won the previous two years, riding a BMW). Other competitors were using the machine in Dakar as late as the early 2000s. 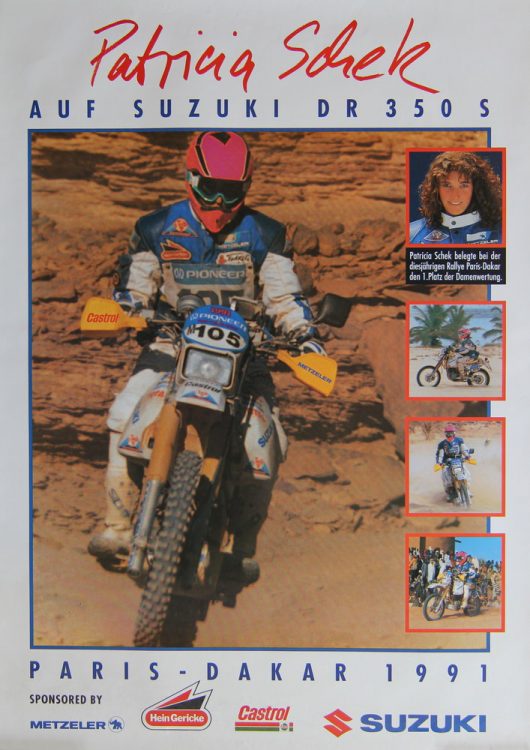 In this vintage promo poster, Patricia Schek flogs a DR350 in the desert. Next time someone says you ride like a girl, you can take that as a compliment! Photo: FemaleRiders.co.uk

Later in its run, the DR350 gained a second wave of attention when it became the bike of choice for Mondo Enduro, the barebones budget round-the-world expedition that was turned into one of the earliest ADV TV specials. Austin Vince, Gerald Vince and their teammates in Mondo Enduro and sequel Terra Circa proved the bike was tough enough to do long, hard miles, as long as the riders were up to it.

Throughout the 1990s and early 2000s, there was a considerable amount of attention from the aftermarket as well. If you wanted, you could get a trick swingarm for the bike from Scott. Other companies offered carburetor upgrades, oil coolers, luggage racks, oversized gas tanks, whatever you could need to blast through the desert or around the globe.

Many riders were happy to leave their machines relatively stock, though, as the DR350 was simple: an air-cooled SOHC single-cylinder motor, with an uncomplicated carburetor. Suzuki emphasized reliability, not performance, and avoided many of the pitfalls Honda’s 250-350 cc machines had suffered in the 1980s. Maintenance was easy, as all the mechanical bits were easy to access.

Suzuki did make one major upgrade to the street-legal version of the DR350, in 1998. The original model was kickstart-only; it would even run with a dead battery, if you could get it started. But customers wanted more convenience, especially as the 350 had a reputation for being difficult to to start when compared to other kick-only machines. So, in ’98, Suzuki put cartridge forks on the bike, and an improved rear shock (e-start came in 1993).

This all made the DR350 an even better bike, but it wasn’t to last. In a move that’s still puzzling, Suzuki canceled the DR350 after 1999, and instead introduced the DR-Z400 series. The DR-Z has gone on to have its own illustrious career, but fans still wonder why Suzuki dropped some of the features of the 350, particularly the six-speed gearbox, when building the 400. 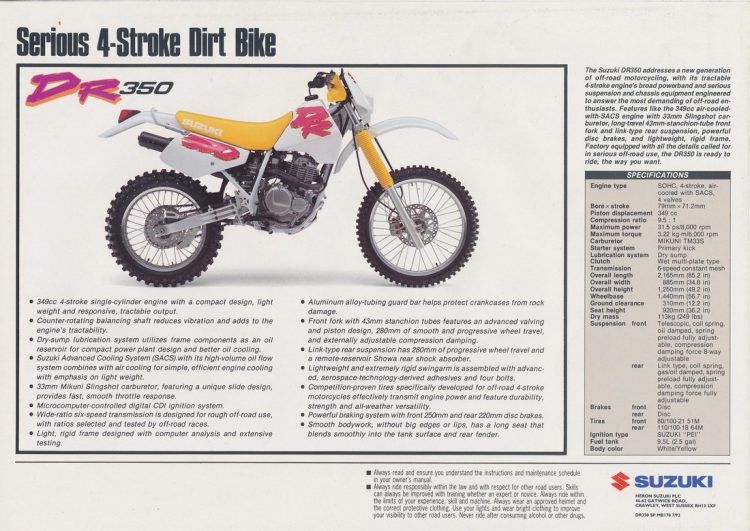 More vintage Suzuki promo material for the DR350S, the original 1990 model. The one for sale is a DR350SE, from ’99, with upgraded suspension and electric start.

So, what about this particular example, for sale in Vermont?

It’s a 1999 DR350SE, so it should have the upgraded suspension and it also obviously has electric start; there’s no kickstarter (you could add one if you felt like going to a lot of extra work). Odometer reading is low (9900 miles), but that’s always a bit of an iffy thing to rely on for older dual sports. The owner has certainly paid attention to detail with the modifications: B&B frame guards and skid plate, JNS LED headlight, Seat Concepts seat and wider footpegs are all good-quality bits that should improve the ride or protect your bike. The owner also put on an FMF muffler, which is almost certainly obnoxiously loud, but at least that will cut the bike’s weight down.

The ad also says the DR350 comes with spare sprockets, a set of TKC80 tires, extra filters, and other bits.

With that in mind, the $2,500 asking price doesn’t seem too unreasonable, although that admittedly is a lot of money for a 20-year-old dual sport bike.

However, the seller is also open to some sort of a trade deal involving an SV650, Versys 650 or Sportster 1200, so maybe you could work something out there.

Otherwise, if you want a sensible dual sport that’s still capable of stupid fun, you could do a lot worse. Nobody else is making a true 350 dual sport anymore; the XT350 was discontinued in 2000, and that machine was a generation behind this DR350SE. The other street-legal 350s on the market currently are nothing more than dirt bikes with street lights and plates, and require more maintenance than this DR, and will be less reliable and comfortable. For a true dual sport 350, this machine is really as good as it got, and was the end of the Japanese development of that class.