Editor’s Note: This is our first post in a series about Adventure Riding in Israel. This series was sponsored by Duby Nevo and his team at Bikelife Israel who have been running motorcycle tours in Israel and offering motorcycle rentals for many years. We have heard fantastic things about Duby and his passion for touring and Israel’s rich history. Ken Engelman, the author, has been fortunate enough to been on one of Duby’s tours.

Most global ADV riders don’t think ‘I should go ride a motorcycle around Israel’.  I know this thought doesn’t come up in conversations around moto-rally campfires, but it most certainly should. I learned firsthand this small country has enormous spaces for ADV riding that include mountains, forests, tree-lined hills, valleys, open plains, deserts, and seaside shores full of your favorite type of riding. 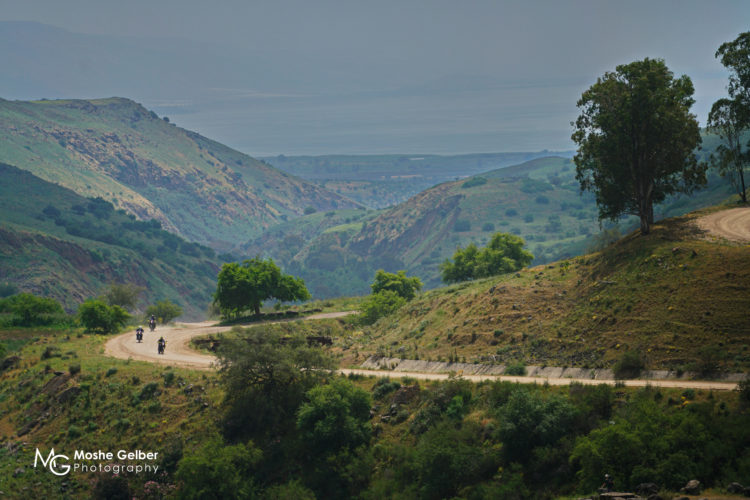 Riding along the Jordan River high above the Sea of Galilee in the background. Photo by Moshe Gelber

Riding Israel is unlike riding anywhere else on our planet for many reasons. The obvious one?

HISTORY. Incredible history. 6,000+ years of history within an extremely diverse landscape you can ride on. 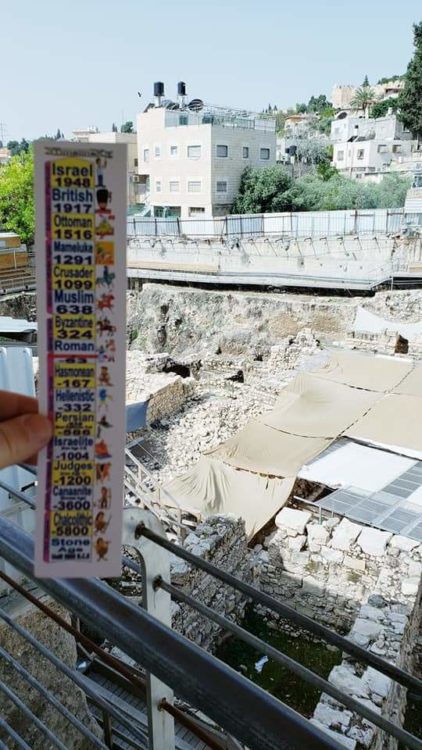 In two days’ time you can experience similar terrain as in Colorado, Arizona, Kansas, San Diego, New York City, and Miami. Seriously. In under two hours, I was riding in the sand at the lowest point on Earth (-1,360’ below sea level at the Dead Sea) and then trying to keep up with street bike riders in the twisty two lane – tree lined forest roads high above Jerusalem (+2,500’ above Sea Level) heading to the [Malibu California] Rock Store-like restaurant that motorcycle riders hang out at called Bar Bahar. There were about 50 bikes and old classic/custom cars in the parking lot, and the place was packed with motorheads, motorcyclists, bikers, and outdoorsy people like us all mingling together. 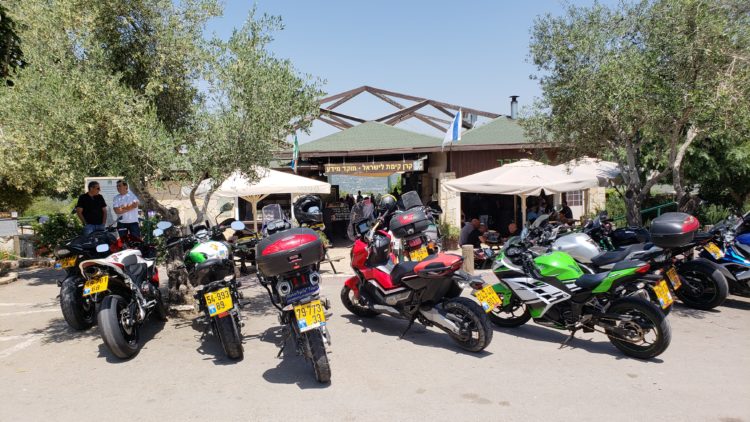 It’s wild to think that every inch of land you ride on was also marched on by countless empires’ military forces throughout history fighting for that one strip of land… and you can ride on it, around it, and sometimes right through the center of it. If you see a path off the side of the road/highway, you can just ‘go’. If you see a sign for a historic site, you can ride past all the tour buses full of international tourists going on pilgrimages, park on the sidewalk, and walk right up to the ticket window. If you want to meet some local riders, you can reach out via Facebook (Israel Motorcycle Club or BMW Motorcycle Club of Israel), or visit a MC dealer, or just ask another rider, and they will probably invite you to join their rides usually to secret riding places that will BLOW – YOUR – MIND. 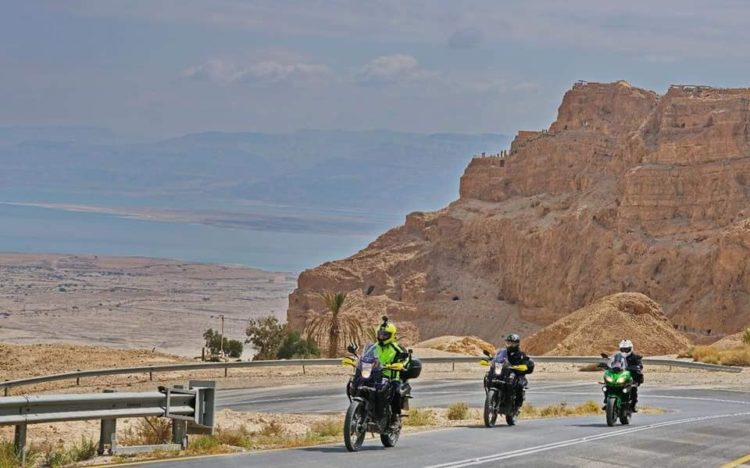 Masada and The Dead Sea. Photo by Moshe Gelber 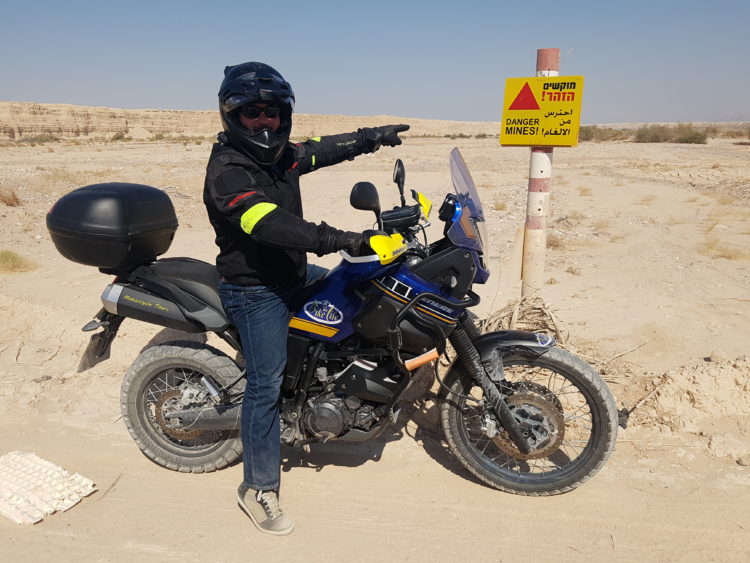 Riding on Route 1 up from the bottom of the Jordanian Valley into Jerusalem – which is the same route most religions agree Jesus walked when he headed there – is just crazy. Finding single track dirt trails in the hills within the Golan Heights is fantastic. Riding deep into the desert at night to a location where there’s no big city light distortion and watching the extremely bright stars in the night sky was mesmerizing (and where I left one of my favorite riding gloves because it was so dark and I was so distracted). Snaking up ancient roads to the Joseph Lookout Point on Mount Gerazim to view Biblical Joseph’s Tomb in Nablus. Riding through the Old City Jerusalem Ramparts is freaking nuts!!  And I did it all… and you can too.  Besides riding to and looking at the incredible sights, you can hear about/learn about the history that happened everywhere you go.  Imagine that for a moment. 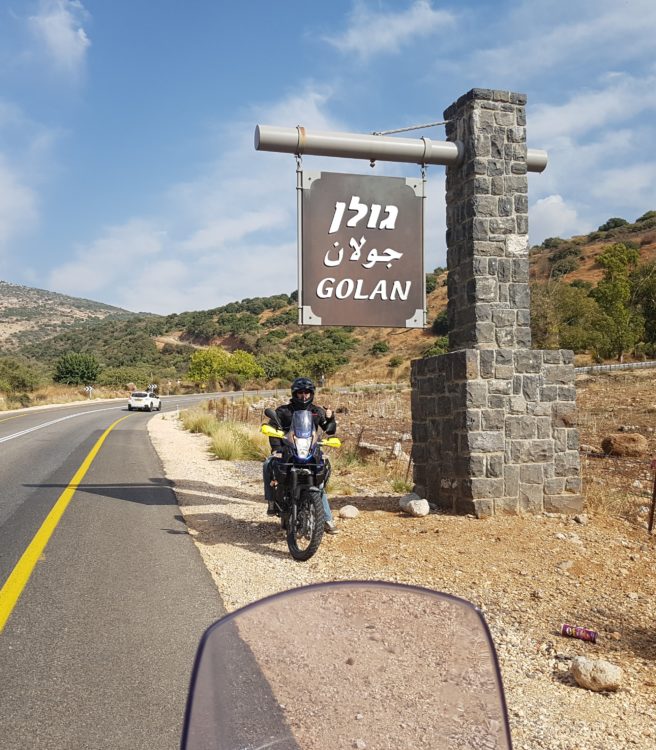 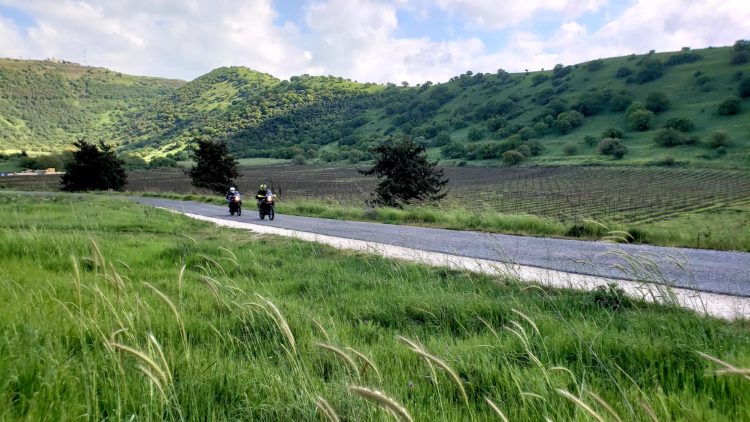 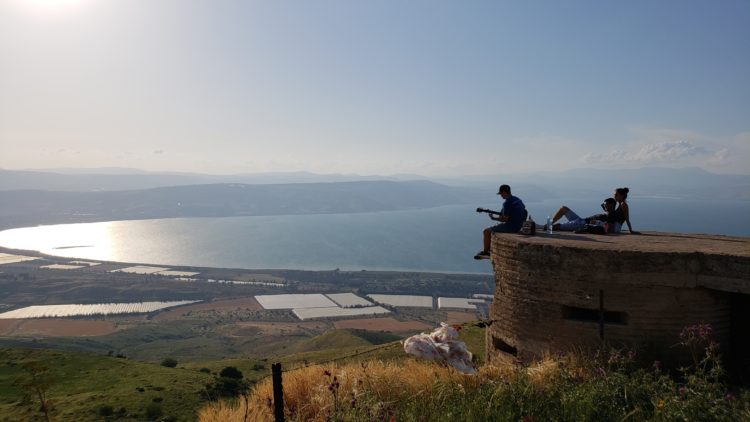 Kinneret Academic College students relaxing between classes on the Sea of Galilee. Photo by Ken Engelman

Additionally, eating meals in ancient food markets that look just like they did way back then, swimming in the warm waters of the Mediterranean Sea and playing the popular Israeli beach game called Matkot, floating on the 31% salt content Dead Sea, hanging out with some college kids who were  playing guitars while watching the sunset overlooking the Kinneret drinking beers, attending a Professional Soccer [football] game in a huge stadium in Netanya, the ‘cool factor’ of riding in Israel just doesn’t end. Israel had all the ADV riding I wanted and then some in terms of non-riding adventure and fun. And then some more. And some more. Every day. 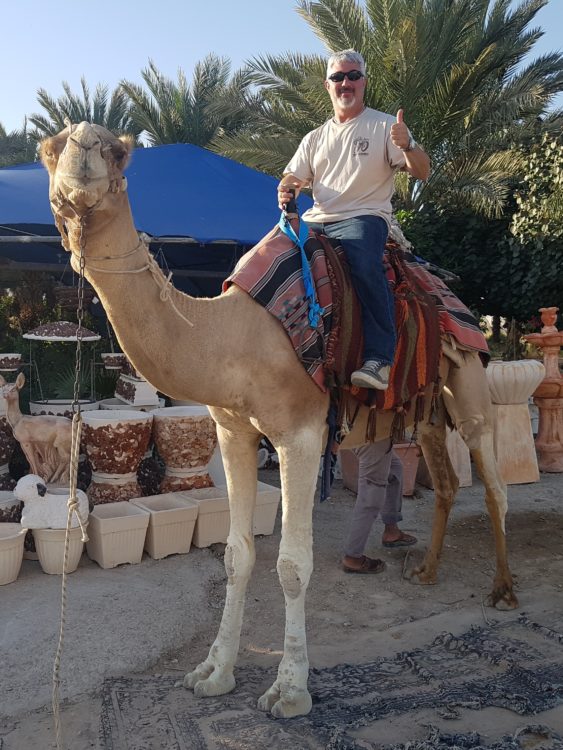 Think about this for a moment: 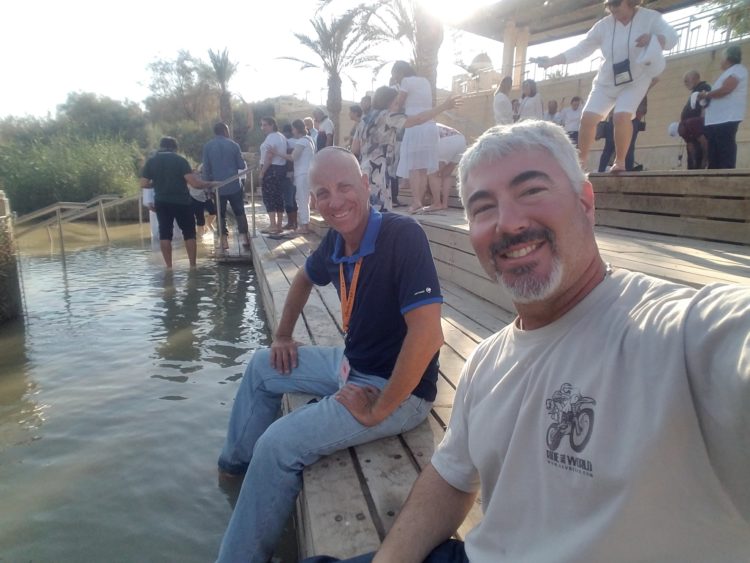 I’ve traveled extensively around the world and ridden in the Alps, Andes, Rockies, etc., and nothing comes close to ‘more diverse ADV’ in less space. In an attempt to keep this story brief, the following are bullet points of the cities, villages, National Parks, and UNESCO World Heritage Sites I visited on my bike and you can too:

Obviously, there are many more than 20 reasons to ride Israel! 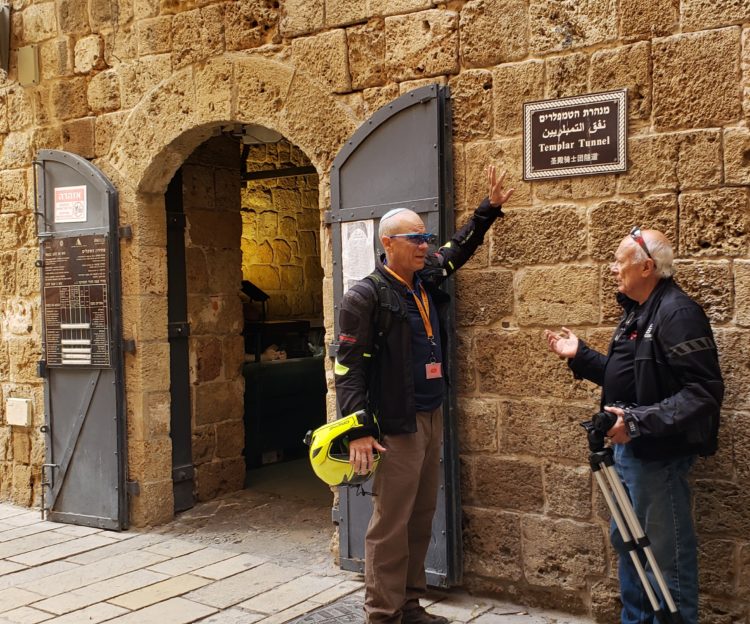 Just as I did, you can ride up to the following places, put your kickstand down, and touch the Western Wall in Jerusalem; hike up to the top of Masada and look out over the Dead Sea in the Jordanian Valley; look down at the caves where they found the Dead Sea Scrolls; stand over and touch the rock Jesus laid on in the Church of the Holy Sepulcher – 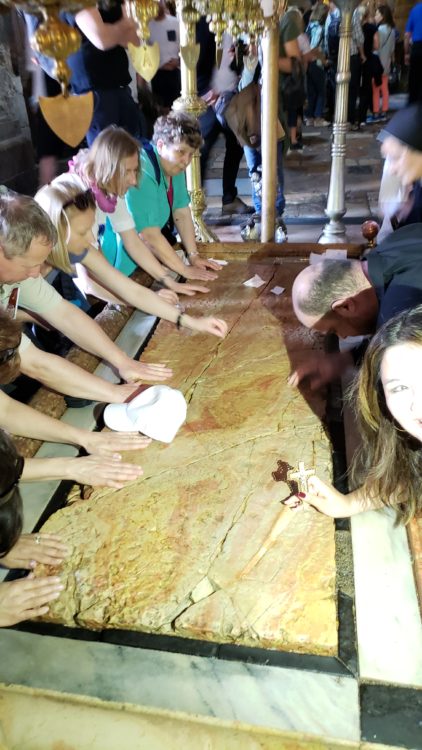 Church of the Holy Sepulchre. Photo by Ken Engelman

Stand next to the actual home of Jesus and Peter on the northern end of the Sea of Galilee (Kinneret); and [you can be] baptized in the same Jordan River where St. John baptized Jesus. It’s truly mind-blowing to ride past the entrance to the Knights Templar Tunnels in the ancient fortress of Akko (I recommend walking through the tunnels), and then ride around the Sea of Galilee (Kinneret) for hours while feeling the ancient history engulf you… experience after experience just continues multiple times per day— every single day. You won’t experience this in the Alps, Andes, Rockies, or anywhere else on Earth. There’s just no way. Yes – those areas have epic views of natural beauty but Israel does too AND so much more. 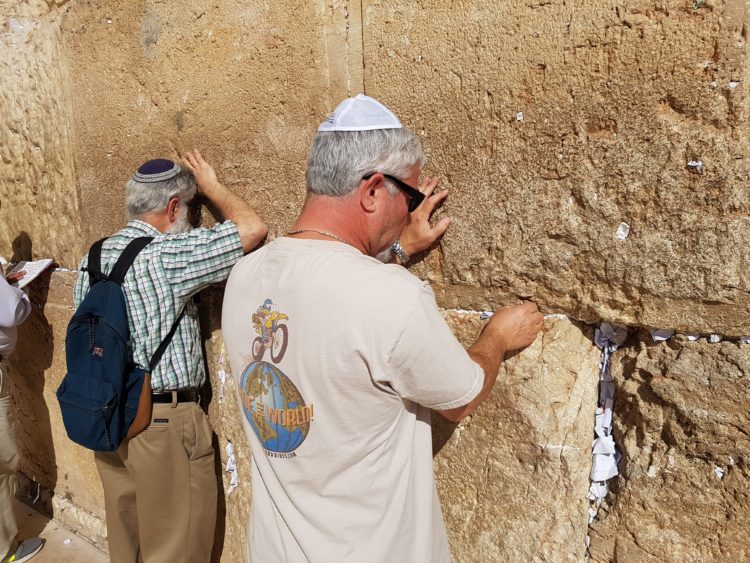 Western Wall in Jerusalem – Placing Note in the Wall. Photo by Duby Nevo

Besides the epic riding, the multicultural sights, sounds, smells, languages, cultures, music, clothing, foods, shopping markets, architecture styles, and genuine smiles I received from members of all faiths were unexpected – but very welcome. Everywhere I rode too, I experienced multicultural people getting along and working together which was not what I expected from what I saw on TV news prior. But like all countries, there are areas you stay away from because of International Travel Warnings/unrest, so we respected those warnings, but we did travel to some exceptional off-road riding areas up in the West Bank. 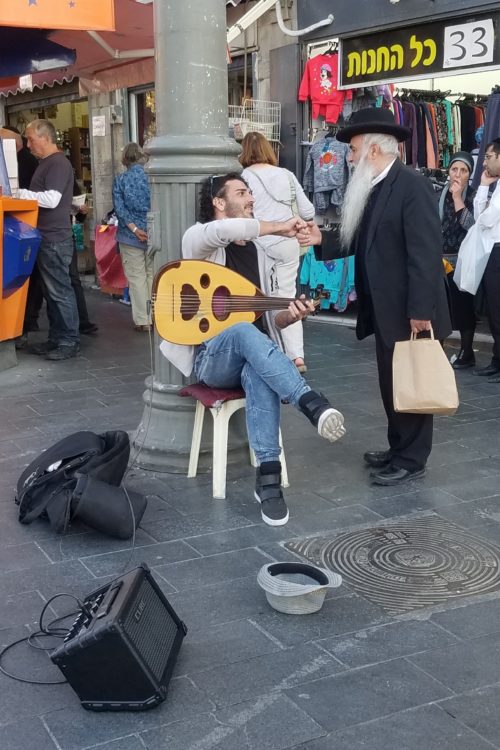 Bikes/GPS: I had a new BMW 1200GS (from BMW Motorrad of Tel Aviv) and then a new Yamaha Tenere (from Bikelife Motorcycle Tours in Israel). I mounted my Samsung 9S+ AT&T cell phone to the handlebars and used Google Maps for my GPS. Honestly, I couldn’t get lost if I wanted to as it worked so well over there. Additionally, all traffic signs are in English, Hebrew, and Arabic, and I felt like I was riding in the US for we have similar traffic laws, although lane splitting is popular because motorcycles and scooters are common modes of transportation for their diverse population. 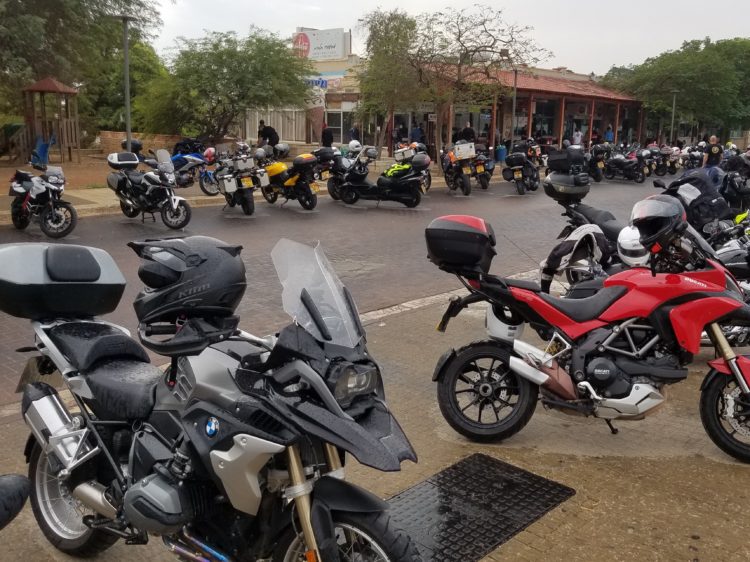 Bike or Tour Bus? The Town of Jesus – Capernaum. Photo by Ken Engelman

Weather. My first two weeks riding there were in October 2017 and then two weeks in April 2018. The weather was comfortable during the day (hot in the desert and cool in the mountains as expected) so my Klim and BMW gear were perfect. Don’t judge me because I am not a camper (I can imagine all the funny emails I will receive from m ADV friends calling me a ground-challenged ADV rider, lol), so I stayed in an exclusive resort, a luxury hotel, some roadside motels, on a kibbutz, in a traveler’s hostel, and in Duby Nevo’s Netanya home with his wonderful family. Each place was comfortable, friendly, and just right for the adventure I was on. 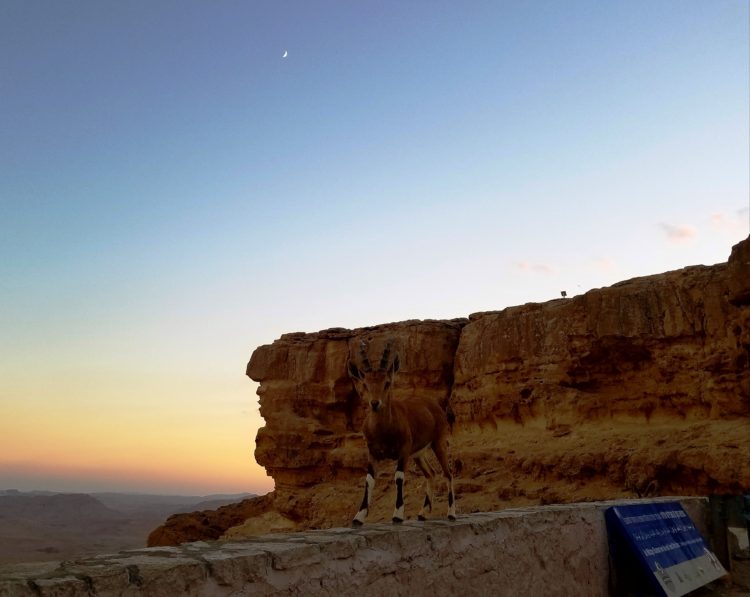 Friendliness. Everywhere I went, people smiled and said hello. Once some realized I didn’t answer for I didn’t understand, they immediately said ‘Hello’ in English for the majority of people in Israel speak fluent English. When they inquired where I was from, they engaged in conversation as if they actually ‘cared’ and not just making conversation, and many knew where Connecticut was. Imagine that!  I’ve read about this in other moto-adventurer’s books/stories (Simon and Lisa Thomas, Sam Manicom, Peter Starr, Mick McDonald, Glen Heggstad, etc.) but to experience this firsthand was totally awesome.  I had learned a common phrase from Duby’s sister Einat: “Hakol Beseder” which means “everything is ok”.  So many Israeli’s have this peaceful way about them and it is friendly and kind. 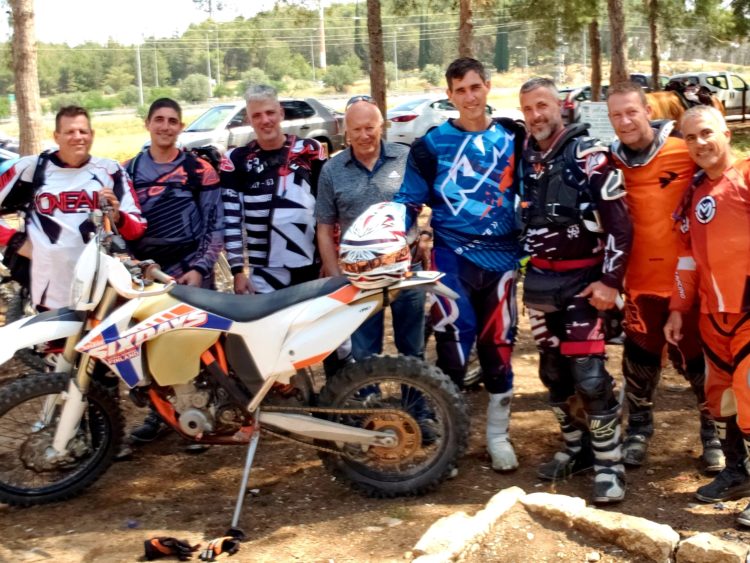 Food: Every meal was fresh, delicious, and comfortable for the many miles we rode each day, although I took breaks for water (and espresso). Mediterranean style food is tasty and healthy and didn’t make me feel full or ‘stuffed’. Fresh Hummus… whoa, that tasted great as did the Falafels, Shakshuka, and Israeli salads I had. In fact, with all the diverse foods I ate over there, I felt healthier when I came back to the states! I remember there was a steakhouse on the Kinneret called Deck’s that was superb, and another delicious restaurant in Netanya called El Gaucho overlooking the Mediterranean Sea sunset. When I close my eyes, I can smell the incredible aromas of the diverse dishes placed in front of us.

Flights to Israel. There are many different airlines that offer affordable rates from major cities around the world (I flew from JFK in New York City).  Because I was curious, I compared JFK to Tel Aviv flight costs to other more popular riding destinations around the world to see if flying to Israel was more expensive – and it was not. They were all in the same ballpark.  Overall, the costs for food, lodging, and everything else was just like flying to other popular destinations. 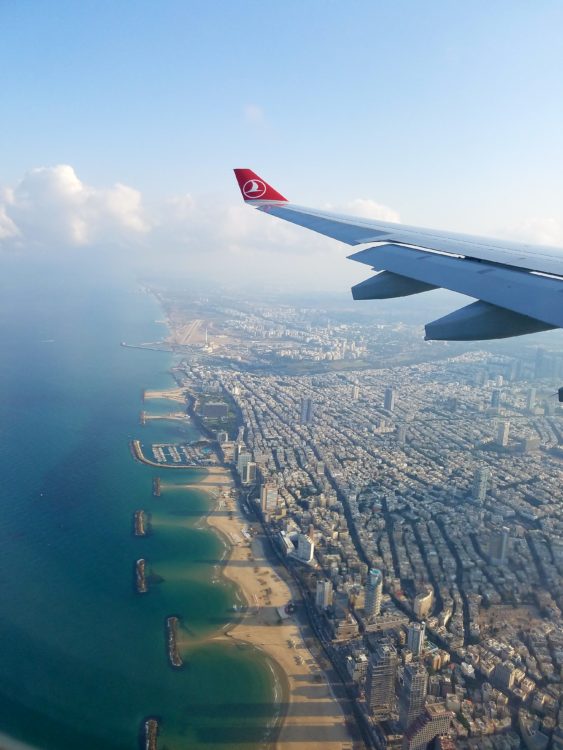 Israeli Welcome in a Netanya bar.  Selfie by Ken Engelman

I will leave this brief summary with this statement: Israel is the largest open air museum on Earth that is Western Culture comfortable, rider safe, bike-friendly, and accommodating to its international guests. If you ride Israel, you will repeatedly think about, and look over your photos/videos, more so than anywhere else you’ve ever traveled to. I guarantee it.

I welcome questions in the comments below.