When you ask people about all-time great dual sport motorcycles, the Yamaha XT225 Serow won’t be one of the first bikes mentioned, at least in North America.

But, it deserves more respect, as the XT225 faithfully served countless people who, for whatever reason, didn’t have a more exciting dual sport. Maybe they were too small, maybe they were too inexperienced, maybe they just didn’t have the money for a more powerful machine. No matter! The XT225 might have been mild-mannered, but it got the job done for a long production run, and is still worth looking at today.

The XT225 hit the market in 1986, powered by a 223 cc air-cooled single-cylinder engine, with two-valve SOHC top end. Not very impressive, even for the ’80s, but that wasn’t what Yamaha was going for. This was almost the exact same engine as in the TW200, and Yamaha just wanted to make a non-complicated, tough and cheap four-stroke. At least it had a six-speed gearbox, allowing the XT to still dig in off-road while not completely revving its guts out on the street.

Kind of a wimpy front brake, but that’s par for the course on small-capacity dual sports. Photo: For an older trail bike, it’s in good nick. Photo: Grant Elms/Facebook

Other components were also unimpressive: a 220 mm front brake disc, a drum brake in back. Non-adjustable telescopic forks up front, a rear monoshock that was only adjustable for preload. Fairly tame styling, a 2.3-gallon fuel tank.

However, there were two numbers that might not have been exciting, but were vital to the bike’s success: seat height was a very manageable 31.9 inches, and the XT225 weighed about 267 lbs when fuelled up and ready to ride.These features were both very important for beginning riders and for smaller riders.

And that’s why the XT225 managed to stay in production for 21 years, all the way to 2007. Not everyone was looking for a bike that would throw max roost, or cruise the highway at hyperspeed. Some riders just wanted a manageable machine that could take them anywhere. The XT225 was happy to oblige, earning its Serow name honestly. In fact, many more experienced riders found out that when they got aboard the XT225, it proved easier to ride into the tough stuff than their hairy-chested thumpers. For a good example of an honest opinion, check out eveRide’s review:

You won’t be (or shouldn’t be) smashing jumps on the XT, but it can roll over just about anything with the right technique.

A small bike like the XT225 does come with some disadvantages. If you’re a bigger guy or girl, you may find it a bit undersized. Bar risers or some modification of the footpegs or seat might help, but aftermarket parts are getting harder and harder to find for these machines. They were never raced and weren’t a big favorite of the overland community, so trick suspension, performance carburetors or big bore kits aren’t necessarily easy to find. You can find a Clarke gas tank for 2002-2008 XT225s, but if you’ve got an older bike, you’ll have to jury-rig something, or just haul some Kolpin fuel cells or something similar. Of course, the bike will go pretty far on the stock tank, if you aren’t bagging on the throttle. 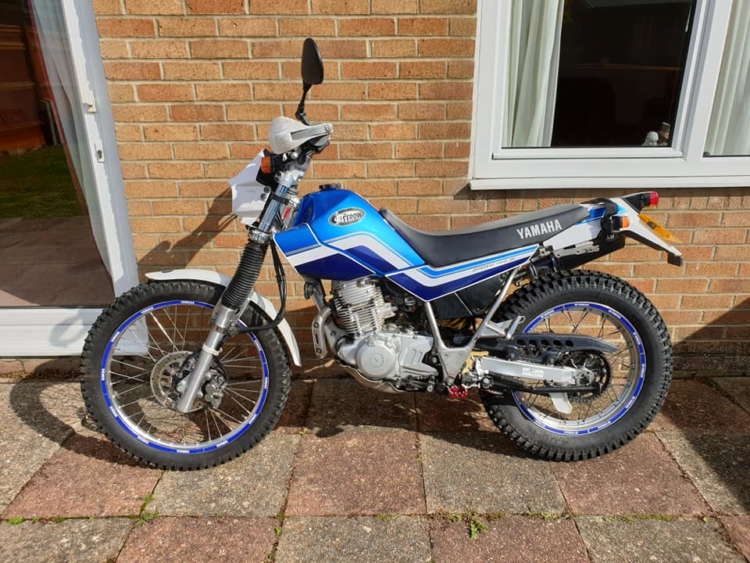 You can still get luggage racks from Happy Trails and Precision, and probably some other places if you look hard enough.

Even though the XT225 wasn’t a high-profile bike in North America, it certainly sold well here, and in other markets, it was a bit more popular. The most famous XT225 is probably the machine Lois Pryce used for her Alaska-to-Argentina trip, forming the basis for the book Lois on the Loose. 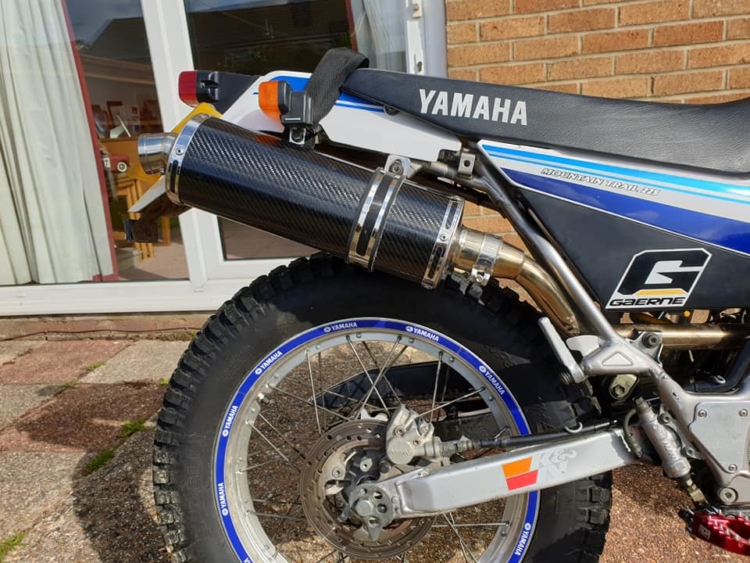 The aftermarket can is probably lighter than stock, and a little louder, but don’t expect much more power. Photo: Grant Elms/Facebook

The seller doesn’t mention the rear wheel spokes, but it’d be a good idea to check them out, as that’s one of the most common points of failure on these machines, and Yamaha spokes tend to be a bit pricey, as they must be purchased as an entire kit.

Perhaps the biggest problem here is the asking price of £2,650. Even in the UK, where single-cylinder duallies are a bit more rare, that’s a lot of coin; you could buy a much newer Honda CRF250L for that kind of money (it’d still be a used bike, of course). But! If you want simplicity and light weight, the XT225 offers both. If you need an easy-to-ride duallie, you could spend a bunch of money modifying a newer bike, or just buy the XT225 and ride it as-is.

Read all about it
Some adventure travel books

Why We Need Adventure Motorcycling