Do you want a bike that’s extremely unique, and also extremely competent? Not a one-off machine like a chopper, that only gets its individuality because of poor design choices, but a bike that’s purpose-built to be good at something? And wouldn’t it be really great if it was sold at a price that most people could afford?

If that all describes you, then maybe you should get in a bid on this 2004 Yamaha WR450 2-TRAC. Act quickly: the auction ends today.

What’s so cool about this bike? Let’s start with the fact that it’s one of Yamaha’s 2-TRAC models, with two-wheel drive. These had a production range that was reckoned to be a few hundred models (nobody seems to know for sure). The 2-TRAC models were a collaboration between Ohlins (who originally developed the front-wheel drive system) and Yamaha (who fitted it to the WR450). Or at least, that seems to be the prevailing story around the Internet. 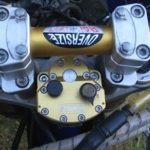 A steering damper helps you keep everything in line. Photo: eBay 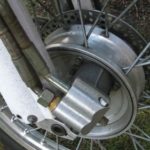 The idea of a motorcycle with two-wheel drive had been around since at least the 1960s, with Rokon’s Trail-Breaker using a chain-driven front wheel for the same purpose (that bike was developed in the ’50s, with Rokon buying the design). Rokon’s bikes were only used for utilitarian off-road purposes; Ohlins wanted to build street-legal two-wheel drive bikes, and started working on designs in the 1990s (some people say Yamaha’s experiments started even earlier, in the ’80s). There were skunk works bikes of all kinds—adventure bikes, sportbikes, and dirt bikes. But, it was only the dirt bikes that saw real market appearance, and only in limited numbers in the early 2000s.

The 2-TRAC motorcycles used a hydraulically-driven front wheel, instead of the chain-driven design; the gearbox drove a chain, which ran the hydraulic pump, which in turn drove the front wheel. In this application, the front wheel only used a small percentage of the engine’s power around 10-15 per cent maximum. It was designed to only engage when the rear wheel slipped; if you were running up a sand dune, and you started to lose traction in back, then the front wheel would kick in and magically pull you forward.

In many ways, it was a brilliant idea, and should have been a lot more successful. Just about every review of the 2-TRAC bike said it was a game-changer in low-traction situations. Even though it was a lot of extra complication, in certain applications it would provide a huge advantage—think desert racing. Of course, the ASO would have banned the technology eventually, ‘cuz that’s how they roll, but it would have been fun to watch the technology develop. 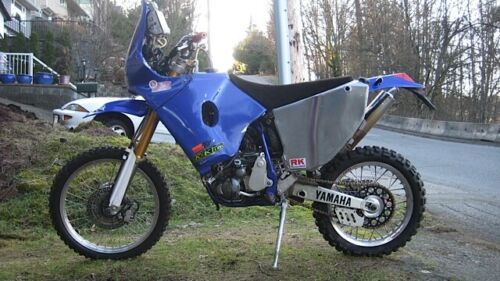 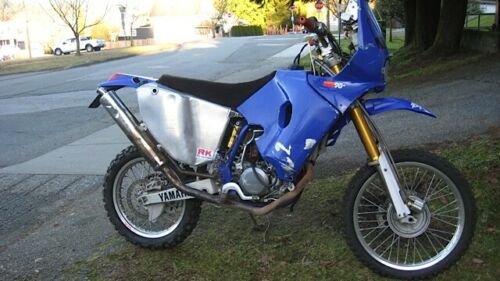 Is it a real ex-Dakar bike? Well, someone went to a lot of work to put those extra fuel tanks on it … Photo: eBay 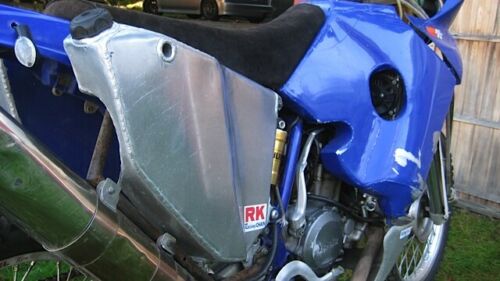 That seat is an add-on as well. Photo: eBay

Other than the unique two-wheel drive system, the bike was still a decent off-roader, basically a WR450 with good suspension (Ohlins forks and shock). It had Yamaha’s liquid-cooled 449 cc single-cylinder engine, with a five-valve head (titanium valves, too!). It was designed to be a race-competitive bike, and by the looks of this machine for sale in Blaine, Washington, it was improved even more towards that end.

All these improvements ramp the coolness up to another level. The seller claims this bike was built to race in the 2005 Dakar Rally. Is that the truth? Hard to say, but you could probably figure it out if you had a bit more information, and if you knew someone on the inside. Either way, look at the extra stuff bolted on here: four long-range fuel tanks, Excel rear hub, dual desert-style headlights, custom seat and airbox, electronic map chart and trip meter, rally-style bodywork, and plenty of other details if you look closely. The WR450 2-TRAC was a special bike, but this has been developed to the next level, it seems.

The seller says there is no paperwork with the bike due to its competition-only status, but that a registered WR450 comes with the machine. As per the ad, “The serial # on this bike is 000011111 I contacted Yamaha I wanted to make it street legal and they were very nice and helpful, but told me this # does not exist. So I bought a YZ450F Frame (included) here on ebay that had 400 miles on it and all the legal stuff to transfer it over. I haven’t done it yet because I hated the thought of tearing such a possibly important & Historical & maybe even significant bike.” So, if you wanted to get your hands dirty and start messing about with this machine, you could theoretically put a street plate on it, depending on your state DMV’s leniency.

And the price: At the time of writing, there no bids, with bidding starting at $6,500 US and a Buy It Now price of $8,000 US. That sounds like a lot of money for an old dirt bike, but if you could be reasonably sure this was an ex-Dakar machine that was in good running order, well—it’s not like there are many of these on the market. Christini’s two-wheel-drive machines are still in production, but they’re going to cost you more money, and they also don’t have the cool factor of this bike. You could spend your money worse ways! For more information, check out the eBay listing.