Ask any North American rider what the quintessential Kawasaki adventure bike is, and the answer is simple: the KLR650. Kawasaki sold boatloads of the KLR in North America, because it was the right bike at the right time. It had enough trail ability to function as a dual sport, and enough road capability to make a decent adventure bike, at least for riders who were budget-restricted. It got the job done.

Ask a European rider about Kawasaki adventure bikes, and you’ll likely get a different answer, though. In Europe, many Kawi fans flocked to the KLE500 instead of the KLR. Indeed, it had its own respectable production run, from 1991 to 1998 and then 2005 to 2007. 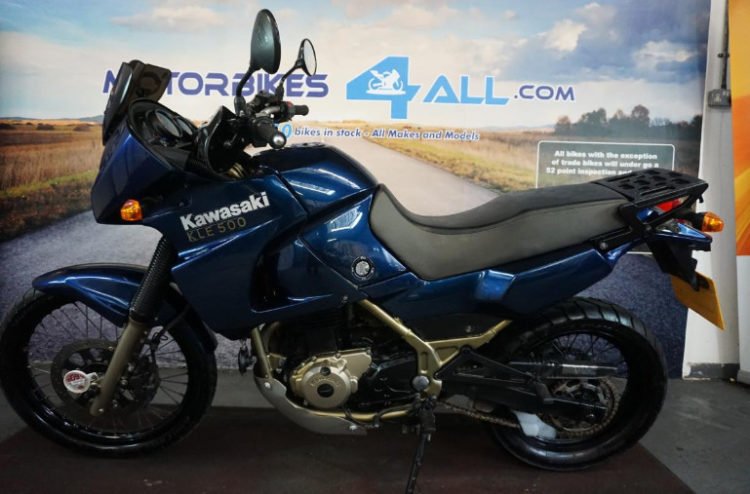 Although it’s the direct ancestor of the Versys 650, the KLE500 has more in common with the Versys-X 300. Photo: Motorbikes4all.com

The KLE500 was, like the modern-day Versys-X 300, a parts-bin bike. Just like the Versys-X uses many recycled Ninja 300 parts, the KLE500 used an engine that was basically transplanted from the Ninja 500 sportbike and Vulcan 500 cruiser. It was a sturdy liquid-cooled parallel twin, making about 47 hp and 32 lb-ft of torque. That might pale when compared to the behemoths of the ADV market today, but the distance between the KLE and the big-bore duallies wasn’t as marked in those days (for the sake of comparison, a 1995 BMW R100 GS Classic made about 60 hp and 56 lb-ft of torque—much more powerful, but not making triple the output).

When you revved the KLE500, a gear-driven counterbalancer kept vibration down, which was good, as you had to rev it up to get any jam out of the engine. It was supposed to be tuned for mid-range power, as opposed to the peaky Ninja 500 power delivery, but many riders thought the result was an engine that was wimpy everywhere in the rpm range.

Despite the differences between the KLE500 and the other Kawis its engine was taken from, they’re close enough that many important spares still aren’t a big problem, and the price was kept down when the bike was new on the market. 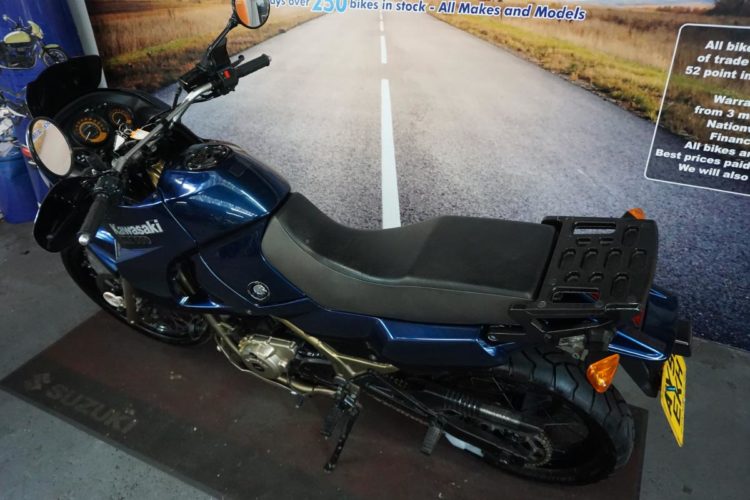 The seat was reckoned terrible, but at least the bike came with a rack. Photo: Motorbikes4all.com

Kawasaki’s choice of engine for the KLE500 said a lot about the bike’s intended usage. The higher-revving parallel twin was less-suited for true dual sport work than a narrow, torquey single-cylinder as found in the KLR. As a result, the KLE was less of a dirt bike, and more of a street bike.

However, it was still better set-up for offroad than some adventure bikes. The stock rims were spoked, with a 21-inch front and 17-inch rear (same as the KLR). There was a low-mounted front fender (maybe because Kawasaki figured it worked better on the street), but you could move that around without too much difficulty, mounting it higher or replacing it. An aluminum skid plate came as stock equipment, and Kawasaki also included a decent rear rack (made of plastic, sadly) from the factory.

Other factory parts were less-suited for rugged use, particularly the low-mount front fender, which was frequently modified by owners with serious off-road intentions. The front forks were notoriously squishy, although they were air-adjustable and some owners were able to set them to their satisfaction using that method. The squishy forks had the undesirable side effect of terrible brake dive, and that’s with a crappy front brake. The two-piston front brake caliper and 300 mm disc still weren’t enough to keep many owners happy (ABS wasn’t an option, and only the most ham-fisted of riders would probably have needed it anyway). Wet weight was 423 lb (192 kg), which also made the bike no fun off-road. Fuel capacity was 15 liters (3.9 US gallons), which made for a range of roughly 270 km or 170 miles, certainly much less than the KLR. The stock tires weren’t well-liked either. 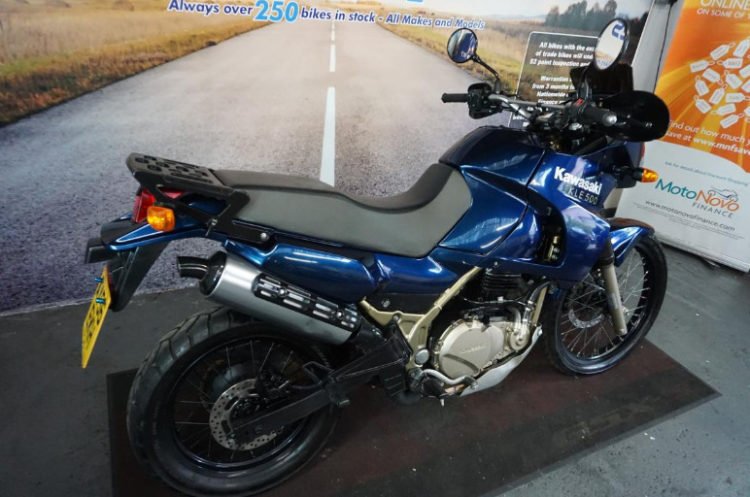 Although it was primarily used as a roadbike, you can find videos of the KLE being used as an offroader on YouTube. Photo: Motorbikes4all.com

So what of this 2006 model, for sale in Worcestershire in the UK? It’s got some things going for it: it looks fairly clean for its age, and relatively unmolested. There are no faux Dakar parts or silly stickers. The ad claims the bike only has one previous owner, and judging by the look of the bike, they were the type who took care of the machine, and got it to dealerships for its maintenance (the bike comes with a stamped service book).

On the other hand … it’s an ’06 model. While reviewers recognized the benefits of the earlier 1991-1998 machine, the later 2005-2007 version was less loved, as it had been choked due to emissions. Kawasaki solved the problem by just going to more displacement when it brought out the new 650 twin for 2008, replacing the KLE with the Versys 650.

But, the Versys is much more of a street bike, and the KLE is still a dual-sport, despite its shortcomings in the dirt. If you want to get your hands on one, they’re getting harder to find, and this could be your chance, if you think the £2590 asking price is worth it …