Behold, the Suzuki Trojan! A bike that’s hard to find, but for some riders, worth the effort. Here’s why: 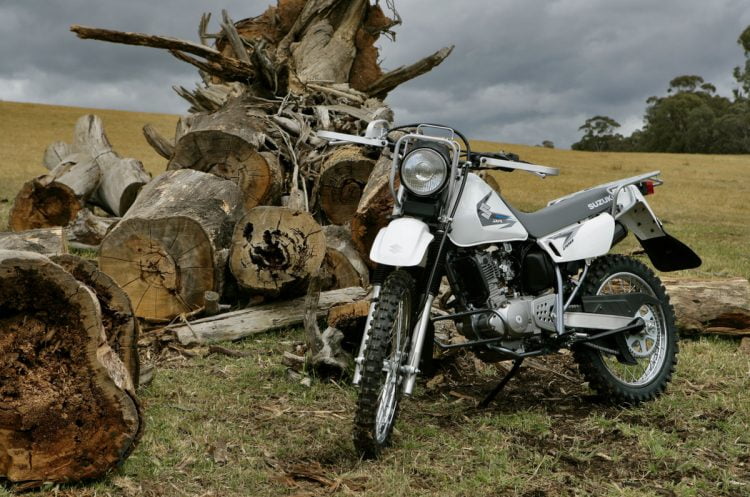 A cool bike, although its really just a tarted-up DR200. Why doesnt Suzuki sell these accessories in North America, one wonders? Check out that oil cooler, the dual sidestand setup, the engine guard, the wraparound handguards. The mud flaps are kind of lame, though.  Photo: Suzuki

Adventure bike design is heading in three different directions these days. First, there’s the speed-junkie crowd, who want bikes like KTM’s EXC lineup, strapping on minimalist soft luggage so they can tear up the tightest trails their bike fits down. Who cares that it will shake your body apart once you have to cover serious distance at high speed? Screw highway capability!

Then, there’s the big-bore crowd. These riders want the ability to cover long distance in comfort, while maintaining some off-pavement capability, and hauling a lifetime’s accumulation of camping equipment. Who cares that the bike costs $20,000 after you accessorize it? Screw retirement savings!

And, there’s the third set: the riders who aren’t too fussed about speed, want to save a bit of money, and just want to see the world—preferably on an affordable, easy-to-ride bike, one that isn’t too big. In the past, this was where the KLR reigned, but there aren’t many adventure bikes built for this market anymore. Many riders end up buying a 250 dual sport and bolting on a bigger tank, some racks, some protective bits, and building their own ADV machine. Or, they buy a 250 adventure bike from China, and wonder if it will hold up.

Kickstart and electric start both! Not something you see often in the dual sport world these days. Photo: Suzuki

It’s too bad, really, because one of the Japanese OEMs builds a motorcycle that’s got almost everything you’d need for a proper small-capacity adventure bike, and it comes that way from the factory. The machine? The Suzuki Trojan.

That name might sound awkward, if your exposure to Trojans came through a pharmacy and not the Iliad. But this is actually a bike that should be familiar to motorcyclists in almost any country, even though the Trojan is mainly sold in Australia and New Zealand these days, far as we can tell. Y’see, the Trojan is really just a utilitarian version of the long-running DR200SE dual sport.

When we say long-running, we mean it. Although the DR line goes back to the early ’80s in some market, the current DR200 dual sport came to showrooms in 1985, if you can believe the sales brochures found online. Since then, what’s changed? Barely anything. The bike has an electric start now, not a kickstart, but aside from some recent styling updates, it’s been basically unchanged for the past 35 years.

So, you’d think this was a real cult classic, right? A machine along the lines of the Yamaha SR400, or the Harley-Davidson Sportster, or even the KLR650. That’s not the case, though—through its history in developed markets, the DR200 has basically always been seen as an underpowered machine. Not that it doesn’t have its fans; ADVrider has its own extensive DR200 Thread, and there are Facebook groups for the machine as well. But even those groups are pretty realistic about the bike’s lack of suspension and horsepower. Even the machine’s greatest fans realize it isn’t perfect.

Well, except this guy, maybe.

To sum it all up: the DR200 (or DR200S, or DR200SE, or whatever your version of the machine is called) isn’t powerful (approximately 20 hp output—maybe) . It has suspension that’s best suited to underfed, undersized and underpaid child labour on an Australian cattle station. But it’s also a very tough machine, gets excellent fuel mileage, has a relatively large gas tank, and is sold around most of the world, in developed and developing markets. For those reasons, it makes sense for adventure rider who’s travelling light, and at slow speeds. You can find parts anywhere, if something breaks. If you can’t find a made-in-Japan part, there are Chinese clones of this bike (fairly reliable, too), and those parts might swap over.

If you buy one of these, it’s perfectly capable of hitting the trails and doing all those ADV things, just at slower speeds, as you can see below:

But it’s still a dual sport, and it’d be nice to have some add-ons to allow you to carry more gear, and to protect the bike. That’s what makes the Trojan so great, when compared to most bog standard 200-250 cc duallies. It comes from the factory with a headlight rack (something that’s hard to even find from the aftermarket these days), an oil cooler, a beefy rear rack, engine crash bars, tough metal handguards, and dual kickstands. There’s even a backup kickstarter, which has been deleted off most DR200 models.

If Suzuki offers this package anywhere else in the world, we haven’t found it yet, and that’s too bad, as these bits would be popular with riders in other markets. There’s a similar machine in New Zealand, but it’s currently sold as the DR200SE.

This ag bike in Australia appears to be unused, or at least very little-used, for $4500. It would be enough bike for all manner of fun in Southeast Asia. Photo: BikeSales

There is one catch: It doesn’t appear the Trojan is actually street-legal, as there are no photos of the machine with indicators. Maybe that’s an oversight, maybe there are weird rules in Australia surrounding agricultural vehicles (no surprise, if so!), and maybe, if you were riding through southeast Asia, they wouldn’t care. Hard to say! But as you can see from this ad in Australia, you could purchase one of these machines new for a reasonable sum. Strap a duffel to that massive rack, maybe add a skidplate, and you’re ready for basically anything that will get thrown at you. Even if you wanted more go-fast bits, the aftermarket doesn’t supply much for the DR200 anyway, so you just free up more money to travel the world! And yes, it’s only a 200 … but in a third world country that relies on C90 clones for transport, you’ll be riding the biggest, baddest motorcycle in town.