Most of the bikes featured here in the 4 Sale section have been on a site like autoTRADER, or Craigslist, or eBay, or Facebook Marketplace: A place where the general public goes to buy vehicles. But ADVrider has its own buy/sell/trade section, the Flea Market. It’s a good place to go if you’re looking for something specifically for motorcycles and adventure riding, and you don’t feel like sorting through the crap that fills up the other sites.

It’s especially handy if you’re looking for a bike that’s already been set up for adventure riding, like this 2017 KTM 690 Enduro R, that was built into “the ultimate 690 Adventure/Rally/Enduro.”

That fairing came all the way from Europe, via Rade Garage. Legit kit! Photo: Peter Goodwin

Building a single-cylinder dual sport into an adventure bike is a time-honoured tradition, and the 690 Enduro is possibly the best possible place to start, if you’ve got the money. It’s got a lot of power, but it also has a good reputation for reliability.

The liquid-cooled engine has a four-valve head, with 690 cc displacement, giving it a bump over the rest of the 650-class competition. It was rated for 67 horsepower at the crank, plenty of jam for real-world riding.

Although there was a counterbalancer, some users complained a lot about engine vibration. But let’s be realistic—that comes with the territory of single-cylinder bikes. If you don’t like it, buy a twin, and take the weight penalty. If you want a lightweight production bike, then a thumper is the way to go. Especially a thumper like this, which came with a wet weight of 340 lb. 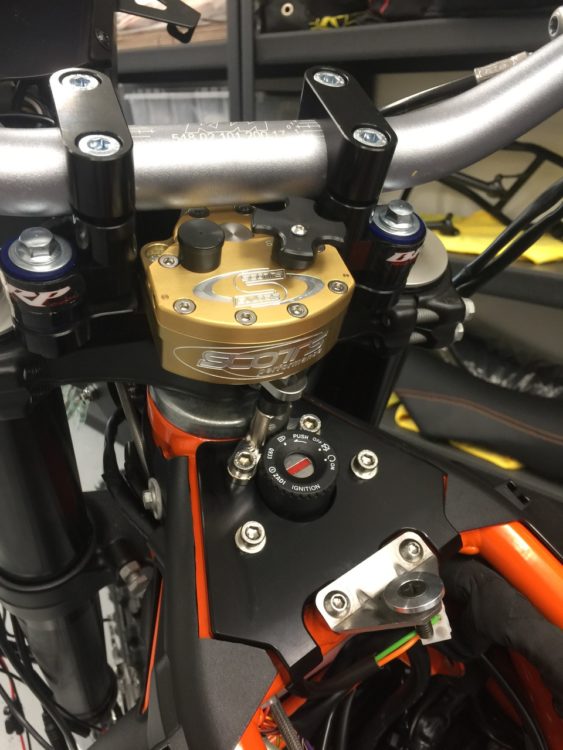 Trick parts everywhere, adding up to what the builder calls the ultimate 690 Adventure/Rally/Enduro. Photo: Peter Goodwin

The guy who built this bike, Peter Goodwin, doesn’t seem to have messed with the engine too much, and that’s a good thing. As a general rule, when you start messing with a motorcycle engine, you can increase performance, but you rarely increase reliability. There’s a new TwinAir air filter, with a Leo Vince slip-on exhaust with RP Racing Rally Low Exhaust Pipe, but those should cut weight and help the bike breath better without making it breakdown-prone. Goodwin also added  a couple of USB dongles that let the bike run low-octane fuel, a Guglatech external fuel filter as well as a Golan Products external fuel filter and a California Cycleworks fuel pump. You should be able to run this machine even if premium fuel isn’t available.

Although he’s messed with the suspension, Goodwin’s not done anything too tricky, like grafting on a completely different front end. Instead, he’s opted for SuperPlush revalve and respring job for front forks and rear shock. He also added a Scotts steering damper.

As far as armour goes, there’s a Touratech skidplate and lower crash bars, and rear brake master cylinder guard, rear subframe/fuel tank reinforcement kit and heel guards from Perun Moto (Perun also built the rear luggage rack, too). A Cox rad guard keeps the cooling system safe, and there’s a billet case protector and rear disc guard from Vanasche Motorsports (as well as a billet rear brake lever and sidestand foot extension). The smallest details have been attended to, like the rear ABS cable (with a 3D-printed guard from Motominded). 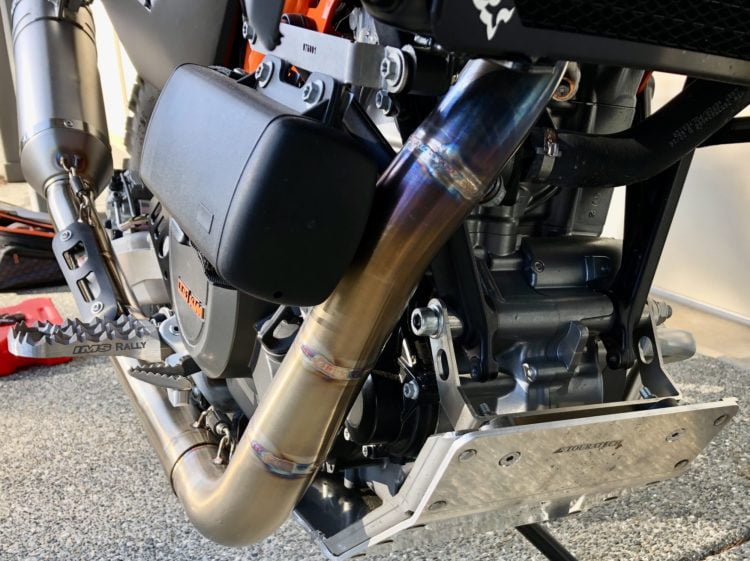 Although he didn’t mess with the engine internals, Goodwin replaced the exhaust and filter systems. Photo: Peter Goodwin

The instrument tower comes from Rade Garage; same for the LED headlight array, and the instruments. Goodwin also included some trim LED turn signals, so this thing is still street-legal.

Whew! That’s quite a list, and it’s probably missing something. The bike comes with all those bits, as well as the OEM factory parts. And here comes the craziest part: This bike only has 213 miles on it since the build, with no offroad riding, says Goodwin. 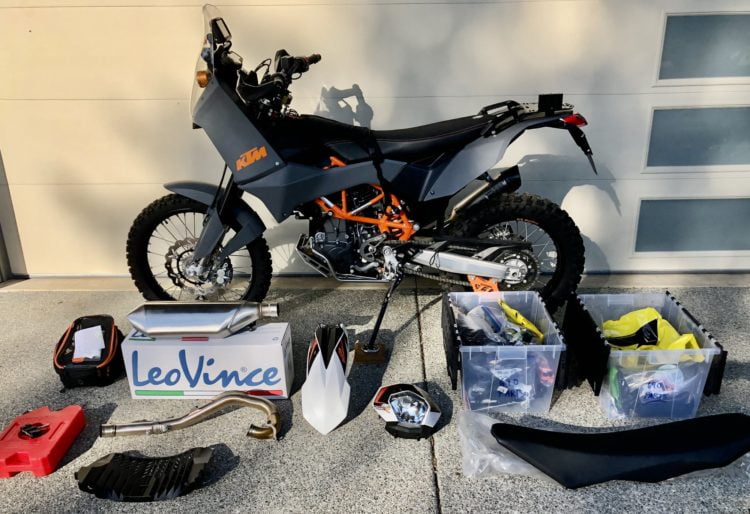 “Work and life got in the way of riding.” Bummer. At least you can buy this cool bike and all these parts for a decent price. Photo: Peter Goodwin

“Work and life got in the way of riding,” he says. “It’s never been off-road, it’s ready for a new owner who will have the time to really enjoy it … and I’ll look for another fun project!”

The bike’s in the Seattle, Washington area, and asking price is “$12,000 or Best Offer.” Considering this machine sold for $10,799 plus fees when new in the US, $12k sounds not bad, if it really is barely broken in. Sure, it would be nice to get the version with the newer motor (2019-on got the dual-counterbalanced engine that also stars in the Husqvarna 701). But that’s also a lot more money, and it wouldn’t come with all the shiny farkles.

It’s Always Been A Good Idea To Wear A Helmet”