Sport touring used to be A Big Thing. Sport bikes were designed with all-day comfort in mind, not just track usage (see also: original Honda Hurricane). That changed over the 1990s, and though the OEMs still made the occasional sporty bike aimed at all-day use (Suzuki RF900R, Honda VFR), sport touring in general got pushed by adventure bikes, by baggers, or by machines like BMW’s RT line, or Yamaha’s FJR1300: fast, capable bikes, but a tad on the large side. They have lots of wind protection, lots of power, but they’re biased towards the touring side of the equation. 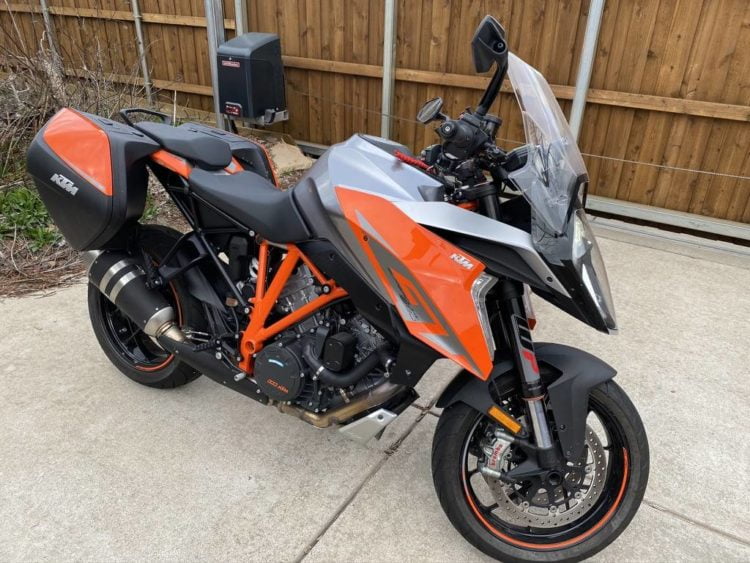 Not everyone liked the Super Duke GT’s looks, but it certainly set itself apart from the rest of the sport touring crowd. Photo: CycleTrader

The GT was based on the 1290 Super Duke R naked bike, the maddest street machine in KTM’s lineup at the time. And, KTM made sure to incorporate most of the R’s meanness into the GT; even though it had more fuel capacity (6.1 gallons) and a set of 30-litre hard bags, it really was a hooligan bike at heart.

The liquid-cooled 1301 cc V-twin engine was slightly re-tuned for the GT. It had a bit more torque that came lower in the rev range(claimed crank output was  106 lb-ft @ 6750 rpm). Claimed horsepower at the crank was 173 hp @ 9500 rpm, down about 4 hp from the R model. Practically speaking the decreased horsepower probably wasn’t something you were going to notice in the real world. The bike still had plenty of rip-your-face-off attitude. But, it also came with Rain mode, so you didn’t get over your head in slippery conditions.

With a 452-lb dry weight, it was a bit beefier than the 430-lb dry weight of the R model, and the added fuel capacity meant the filled-up bike gained even more weight. But, that’s the name of the game in touring; if you add bags, a bigger fuel tank, more bodywork and a windscreen, it adds up. 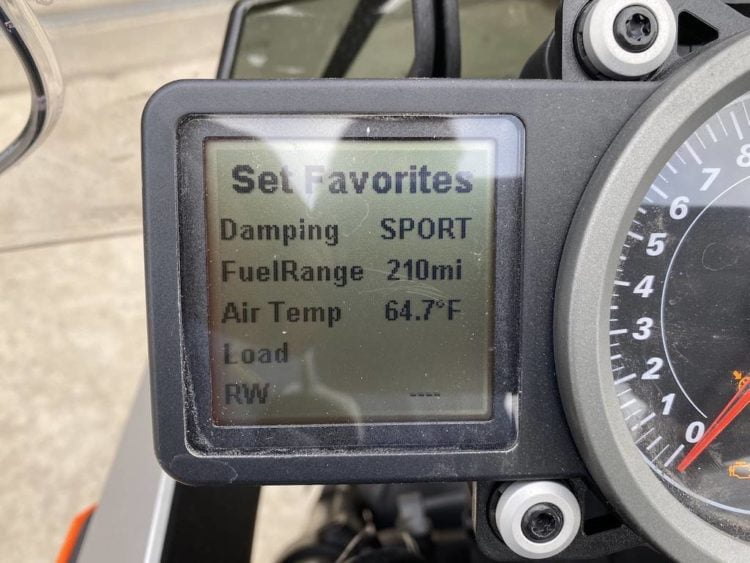 The GT had a decent electronic safety package, although the LCD interface was a bit clunky. Photo: CycleTrader

This was the early days of the electronic safety revolution, and the GT came with a decent package of rider aids, along with Rain mode to limit engine output in poor conditions, it also had leaning ABS. The ABS system also had a supermoto mode, which allowed for all sorts of hoon-ery. Electronically-adjusted semi-active WP suspension was standard; with just the press of a button, you could re-configure the bike’s rear shock for varying rider and luggage load-outs. The LCD interface was a bit clumsy when compared to modern TFT screens, but it worked.

This suspension drove the price up considerably over the standard Super Duke model, and although it worked very well on good roads at speed (or even at a track!), it was no fun on bad, broken pavement. The race-bred fork and shock beat the rider viciously on a rough road, and this was perhaps the greatest failing of the GT.

There were a few other missteps. Some early owners complained of leaky saddlebags, and the windscreen was a clunky-to-adjust affair. The high-beam switch for the cornering headlights was also clunky and easy to activate accidentally, and the heated grips were a pain to turn on via sub-menus on the LCD screen. 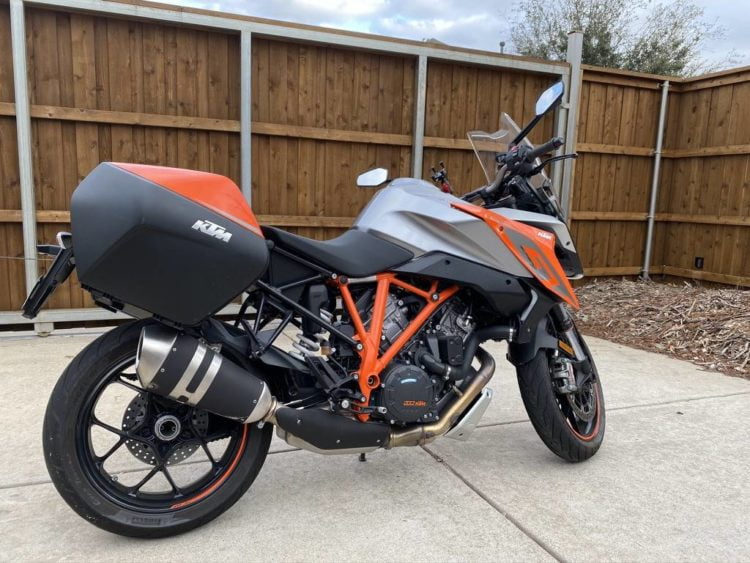 Those bags wouldn’t hold a lot of camping gear, but then, this wasn’t the kind of bike you were riding to a campground. Photo: CycleTrader

But, despite those announces, the Super Duke GT had cornering headlights. It had heated grips. It had an adjustable windshield. It had cruise control. These were things you wouldn’t find on most naked bikes, and it made the GT an enjoyable all-day ride, a machine you could use to really pound out miles—or, you could do a track day. The footpegs and handlebars were moved around a bit, for touring comfort, but the GT was still quite sporty, and pretty comfortable for taller riders. It really was the best of both the sport and touring worlds, as long as you didn’t plan on heading down pavement that was too beat-up … and as long as you could afford it.

The 2017 model, like this one for sale in Texas, had a $19,999 US price tag. Now, a few years later, this example is being sold off for $11,500, with only 1,100 miles on the clock. That’s huge savings for a bike that’s barely broken in! The seller says it was always stored inside, but does note the luggage is scratched up somewhat, from taking the bike in and out of the garage. Frankly, that’s the last thing that’s going to be on your mind at 150 miles an hour—not, of course, that we recommend such anti-social activity. However, I can tell you from personal experience that this is a bike that very much brings out the rider’s inner hooligan. If that’s a risk you’re willing to take, and you’ve got the money, this is a machine you won’t regret unless you hate going fast and having fun.