You don’t need to have everything going to plan to have a grand motorcycle adventure. Gorgeous weather and offroad hoon-ery are great, but even if things go sideways, you can have fun, as last weekend’s Canadian KTM Adventure Rally proved.

The Canadian edition of the KTM Adventure Rally is in its third year; this time, it ran out of the Red Mountain Resort, in Rossland, BC. I attended with fellow Canadian moto-journo Costa Mouzouris. It was our first time at the event. Alas, it didn’t take long for a familiar theme to emerge, one I know well from my days around the rally scene on Canada’s east coast. Despite hard work and preparation ahead of time, an uncooperative weather system can quickly change an event’s outlook.

The KTM Adventure Rally has two days of riding, with an easy R2 route and the harder R1 route. Riders follow KTM’s GPS tracks along the route, trying to adhere as closely as possible to the route for max points. 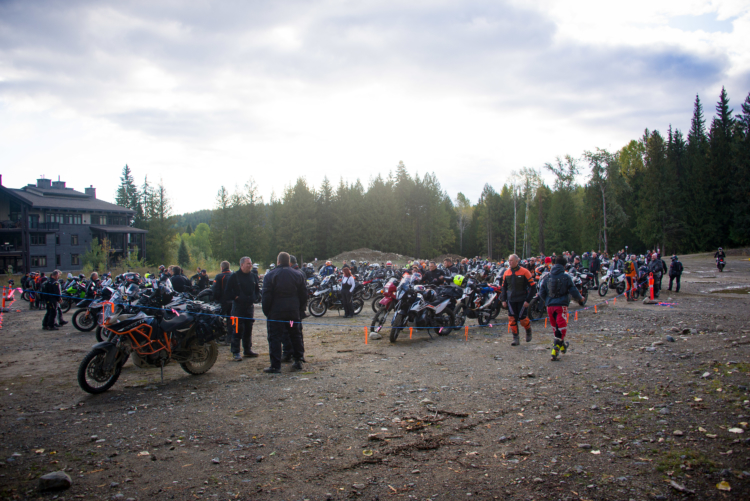 Everything started off just fine on Day 1, with some clouds and occasional sprinkles of rain, but nothing serious.

A weather-induced flight delay meant Costa and I didn’t arrive until half-way through the first day (Friday). Everyone else was already on the trails, so we attached our GPS units, wired in our heated vests,and picked up the afternoon’s track a few minutes ahead of everyone else. A ride through the town of Castlegar, a rip past the pulp mill, and we were on the Columbia and Western Rail Trail.

I’d seen video clips of this section before I left for the rally, and was eagerly looking forward to it. I was not disappointed. It’s a decommissioned rail line, kept in excellent shape. The Rail Trail is easy two-track, with the former railway tunnels added in for fun, and beautiful views of the Columbia River and the Kootenays. It gently curves along mountain sides and is fairly level, due to its railway past, and was exactly what the organizers had promised: a low-stress, high-fun offroad ride that would be easy on any adventure bike.

I was on a KTM 690 Enduro R, and Costa was on the 1290 Adventure R. Costa’s way faster than I am (and it wasn’t my bike’s fault!), but was kind enough to wait for me when I got too far back. And why would he complain? At every stop, the views were gorgeous, even with a bit of rain spitting out of the sky. We were both in Gore Tex Alpinestars jackets and had heated gear; what could go wrong? 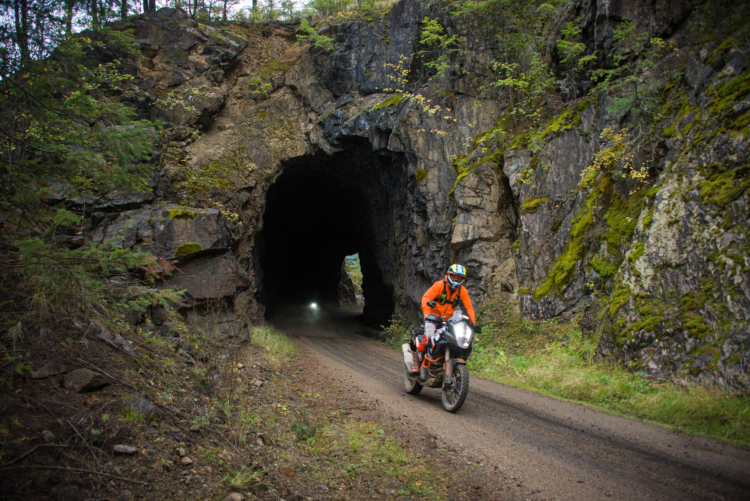 How many trail rides let you ride through a series of old rail tunnels?

Eventually the trail spit us out for a gas stop, and the next mountain climb showed me exactly what could go wrong. I felt a slow, steady leak in my Alpinestars pants. Yuck. My crotch was slowly soaking up the rain, and as we climbed, the temperature dropped, then dropped some more, and hey, there’s snow up here!

Thankfully, the snow wasn’t heavy or building up on the trail (an easy forestry road), but it was starting to accumulate on my helmet visor, and I was getting cold; my core wasn’t bad, but I could feel the blood draining out of my hands,  making me feeling herky-jerky behind the handlebars, and slowing me down more (not that I needed the help).

No worries, I’d just finally plug in my heated vest—I’d cleverly waited to plug it in, figuring the heat would be great when I finally needed it. Except, uh, the heated jacket wouldn’t work; I’d installed it in too much of a hurry, and hadn’t grounded it properly. 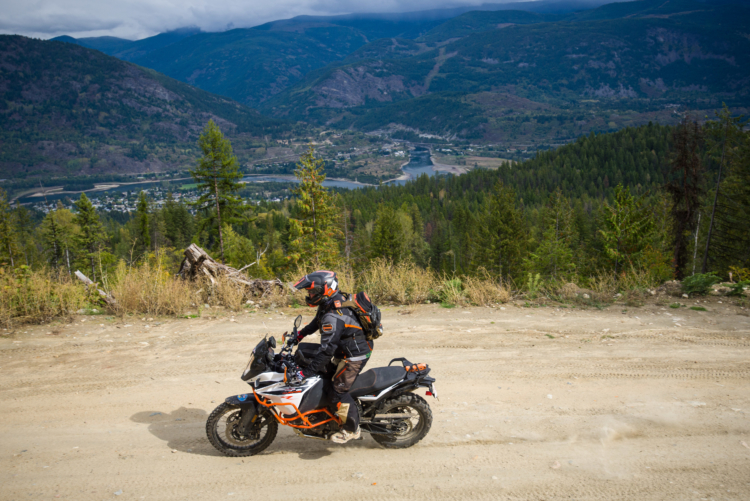 When you’re riding in the Kootenays, the views at every stop are beautiful.

If there’s any lesson I should have learned over the years of riding the many rain-cursed rallies and early/late-season street tours, it’s that proper gear is essential to all-day riding in bad conditions, and here I was, cold and wet on top of a mountain, and slowing Costa down. I was mad at myself, but there was nothing to do but ride it out.

The snow tapered off quickly as we rolled back down, and the temperature rose a few degrees. The washboard sections were pitching the bike’s rear end everywhere, but after we undid a few suspension adjustments that we shouldn’t have made in the first place, the 690 started hooking up much better. Although I was still cold, I kept my speed down to where I was comfortable, and happily avoided riding off one of the many unpaved switchbacks. It would have been much more stylish to hoon around these corners flat track-style, but that wasn’t on the agenda.

There was just one final fiasco, when Costa’s GPS unit crapped out. Thankfully, we had mine as a backup, and even though he was unhappy over the Garmin’s demise, it was no real surprise; word on the street is that his GPS is so old, he actually bought it off a dinosaur. 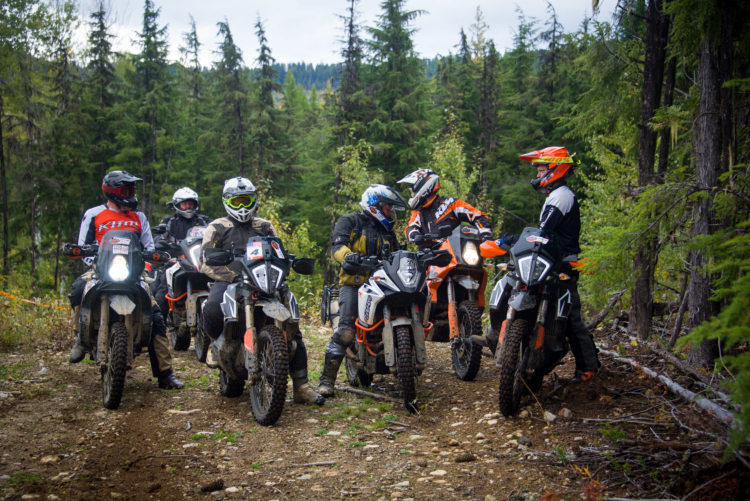 Day 1 was cold and soggy by the end, but riders had a good day before that.

So that was Day 1. We were happy to be back at base, warming up over supper, but lots of other guys and girls were not. Well after dark, other riders were toiling along the R2 route (the easier route we took) and the R1 route; by the end of it, some riders ended up hauled back into camp around 7 PM, so cold that they needed help removing their gloves.

But, nobody was hurt, and Costa and I were happy that not only had we finally gotten through all the transportation hassle to get on the trails, the riding had been incredible, even if the weather had been a bit crappy.

And then came Day 2. 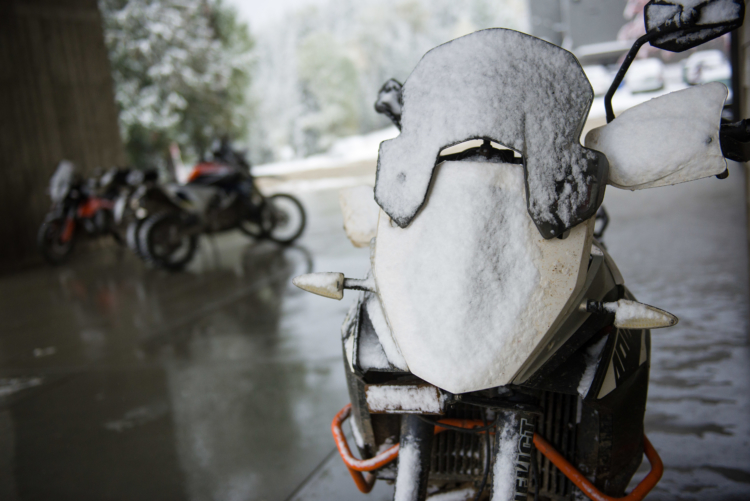 Definitely not what organizers and riders wanted to wake up to on Saturday.

I woke up a couple of times in the night to hear pounding rain and thought “Great—those leaky Alpinestars pants are gonna be absolute misery in the morning.” Then I woke up in the morning, rolled out of bed to look out the window, and realized leaky pants were the least of my problems. There was snow everywhere, and it was piling up quickly.

The organizers sensibly canceled the day’s ride, although a few of the gung-ho types still said they were going to go for a rip. Their enthusiasm didn’t last long; I saw a couple of guys who only made it as far as the parking lot, turning around when they realized there wasn’t enough traction to safely handle the roads.

Instead of riding, KTM had several presentations, including an excellent offroad riding seminar from Chris Birch, who’d been doing rider training in the days leading up to the rally. This was probably the highlight of the morning, as many riders wouldn’t have had any time learning from Birch otherwise, and they got quite a lot of excellent advice packed into a short presentation. 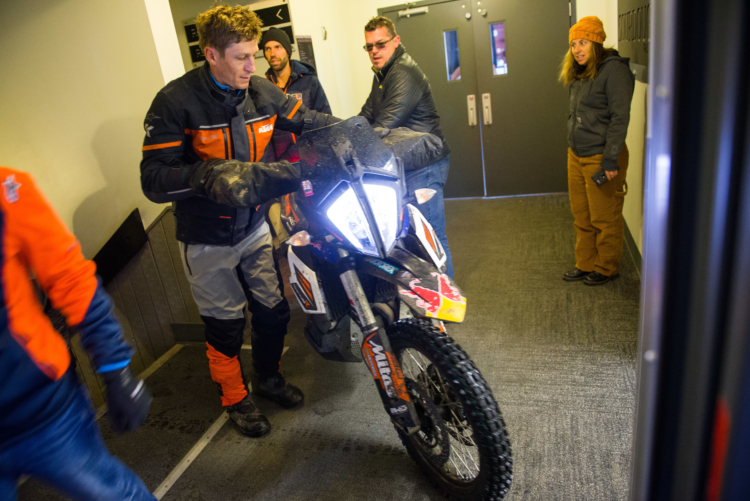 Chris Birch managed to sneak his motorcycle into the facility for a presentation on offroad riding tips.

In the afternoon, KTM ran its Ultimate Race Qualifier in the parking lot. The Ultimate Race is sort of KTM’s equivalent to the GS Trophy, an overseas competition for top amateur KTM riders. To qualify, riders must win regional events on multi-cylinder KTM machines, displaying a combination of technical know-how and top-shelf riding skills. On Day 1 of the rally, they’d been navigating through the hills for points, but on Day 2, the snow meant they were confined to a course built on the resort’s grounds. Piled-up construction debris made for challenging obstacles, and the snow complicated things even further.

Wayne Hodder and Wendell Maki were the top two finishers in the Qualifier, and will be representing Canada at this winter’s Ultimate Race, which will run alongside the Merzouga Rally, with full factory-style support for the amateur riders.

The Qualifier ran Saturday afternoon, and the snow made sure it was still tricky, even though it ran on the facility’s grounds instead of in the mountains.

After the Qualifier, the weekend closed down with the awards banquet, with prizes handed out to volunteers and top riders, along with a random draw table that was piled high with prizes. Around the restaurant, I heard a lot of people having fun, and I didn’t hear anyone complaining about the cancellation. After all, the weather wasn’t KTM’s fault, and the staff made sure we all had something to do while snowed in on Saturday. Just the same, I’m betting they won’t schedule next year’s rally for the mountains in September again. There is some talk that, for 2020, the Canadian KTM event will head east … we’ll see!