Want to buy a race bike? Not a clapped-out EX500 with a battered fairing, dodgy safety wiring and a peeling paint job, posted at your local track. We’re talking about a real race bike here, a 2019 KTM RC16 MotoGP machine, as piloted by Pol Espargaro last season. When we say this is a once in a lifetime opportunity, we mean it.

The RC16 has a V4 engine, (DOHC, four-stroke, and liquid-cooled, obviously). Displacement is 1000cc, probably with 81mm bore and 48.5mm stroke, although KTM hasn’t said for sure. With the series spec Magneti Marelli ECU, KTM says the RC16 revs to 18,500 rpm, and puts out more than 265 horsepower. Supposedly, that’s good for a top speed over 365 km/h. KTM has built in clever wheelie control, traction control and adjustable engine braking control, as well as a quickshifter, all enabled by the throttle-by-wire system. The RC16 also has a seamless six-speed gearbox (click here for a good explanation of what that means, and why it matters—in a nutshell, it makes for smoother shifting). Akrapovic supplied the exhaust.

The RC16 has a steel trellis frame, and from what we can tell, it weighs 157 kilograms dry. The brake discs are carbon-fiber, with choice of 320mm or 340mm diameter, with Brembo calipers, and the wheels are forged magnesium. Front and rear suspension comes from KTM subsidiary WP. No doubt the forks and shock are custom-built for this bike, and highly adjustable.

For the sake of comparison, Honda’s RC213V-S, released for sale in 2016 as a  “Street Legal MotoGP Bike,” didn’t have a seamless gearbox or pneumatic valves … or anywhere near 265 horsepower. It was well over 157 kilograms, too.

Pol Espargaro was a huge part of this bike’s development; now that he’s moving to team up with Marc Marquez (who he’s chasing here), KTM is selling the RC16. Photo: Red Bull KTM

The RC16 debuted in 2016, at the Valencia GP, with Mika Kallio as test pilot. Its first real race use came in 2017, with Bradley Smith and Pol Espargaro riding the bike for Tech3. By 2019, Johann Zarco and Espargaro were riding the machine for the KTM factory team, and Kallio was still the test rider, with occasional starts when Zarco couldn’t ride.

While KTM didn’t win any races on the bike in 2019, Espargaro generally acquitted himself well, with eight top-10 finishes, finishing 11th in the standings. His best effort was a sixth-place finish at Le Mans. The 2020 season is his last with the KTM squad; he’s moving on to the Honda factory team next season, replacing Alex Marquez. Is that why KTM is selling off two of its RC16 racebikes—are these machines that were developed for Espargaro, and now deemed irrelevant? KTM isn’t saying, but some of the details point towards that.

KTM is selling two bikes, and the plan seems to be to sell to two different buyers—both machines won’t go to a single purchaser. KTM’s website says “A 2019 KTM RC16 and all the MotoGP trimmings can be obtained for a price of 288,000 euros (excluding VAT).” That works out to roughly $343,000 USD apiece

The bikes are supposed to come “race prepped,” although KTM doesn’t really explain what that means. Does it just mean new rubber? Will a KTM tech explain how the machine is set up, and how to adjust everything? KTM doesn’t say.

The ad does say that each bike will come with a full set of Pol Espargaro’s race leathers, and one of his helmets, signed. KTM is also throwing in a VIP MotoGP event pack for any 2021 event, including a behind-the-scenes tour, a meet-and-greet with the MotoGP riders, a full set of Red Bull KTM Factory Racing team wear, and weekend access to the Red Bull Energy Station unit with full catering and refreshment options. Princely treatment, indeed—but, that’s what you get when you buy a motorcycle for almost $350,000.

KTM’s ad also carefully points out the company isn’t planning to just dump the bikes on the first buyer that shows up. KTM might want to keep the machines out of the hands of other teams, and probably wants to ensure the bikes go to someone who’s going to treat them properly. As per the advert, “Serious enquiries should be directed to rc16@ktm.com whereupon KTM reserve the right to compile a buyers list and make a final decision on the destination of the two race bikes.” No doubt that email address is already flooded with PayPal scammers, because that’s just how online motorcycle sales go, these days … 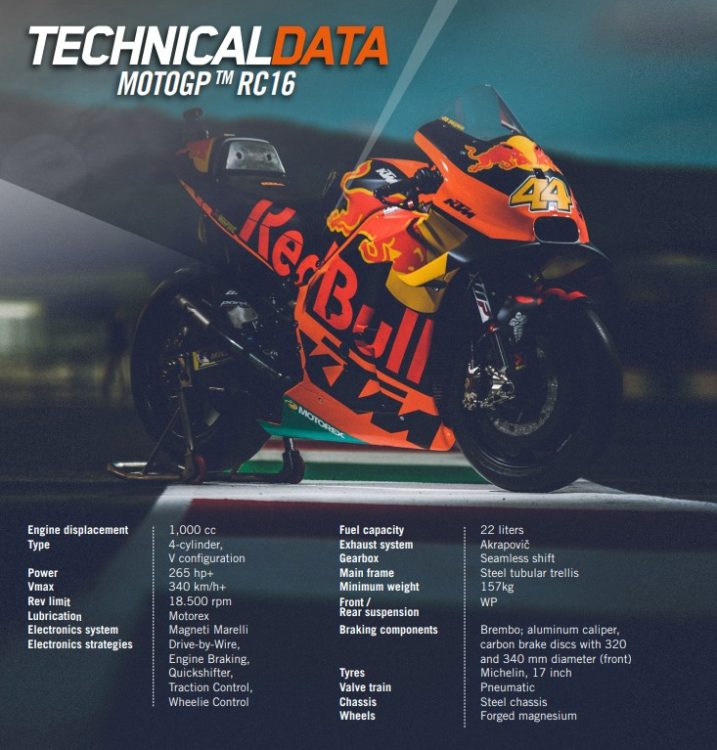 Let’s be honest: Nobody’s buying this bike on the strength of a magazine-style spec sheet. Photo: KTM

Who would buy this bike?

These machines are almost certainly going to go to collectors with big pockets—think Jay Leno, or maybe a Saudi prince. KTM will have no trouble selling them, because race-used MotoGP bikes almost never come up for sale. Machines from World Supersport, World Superbike and the Isle of Man TT occasionally hit the market, but those are all production-based bikes, with no major secrets built in. GP bikes are filled with skunk works tech, and the factories generally like to keep that stuff pretty close to the vest.

As for the rest of us, with regular-sized pockets: Well, it’s a fun thing to dream about, but $350k is far outside our price range, and it’s hardly an ADV bike. For a lot less, you could buy KTM’s 2021 450 Rally Replica, and have money left over to race. That’s unobtanium for most of us as well, but at least we’d be less likely to cry when it fell over in the garage.