Governments all over the world often require insurance for motorists (motorcyclists included).   Many would agree that some level of required insurance is fair.  However, some in North America consider government regulations that require insurance a governmental overreach.

Well, the Government of India has taken the requirement for a certain type of insurance one step further.  An Indian Supreme Court ruling ordered a stringent requirement for third-party liability coverage.

All persons purchasing new two-wheeled conveyances (motorcycles/scooters/mopeds) must purchase 5 years of third-party liability coverage at the time of sale (automobiles have to purchase only 3 years).  To ensure compliance, insurance companies must collect the third party insurance premium for the entire 5-year term at the time of sale.  The order applies to all policies sold from September 1, 2018.

According to Sanjay Datta, Head of Underwriting ICICI Lombard General Insurance, the ruling will help improve the number of covered vehicles.

“This initiative goes toward improviding penetration in the overall sector and more vehicles are going to be covered.  The question of uniinsured versus insured will go away.  The extent of insurance cover on third party vehicles will be bigger and better.”

Datta said that as vehicles age and depreciation accelerates, many owners skip annual renewals or buy policies without third-party liability.

The actual Supreme court ruling was not readily available for analysis.  However, part of the rationale may lie in the fact that in India, there is no legal time limit on claims.  Further, there is no total liability limit on Indian insurance policies.

Based on the number sheer number of accidents/deaths, the Supreme Court may have been attempting to ensure that those not at fault get some compensation.  With no time limit on claims and no limit to the amount the insurance company has to pay for at fault liability claims, some sort of regulation to ensure “long-term” insurance can be understood.

The Cost Of Insurance 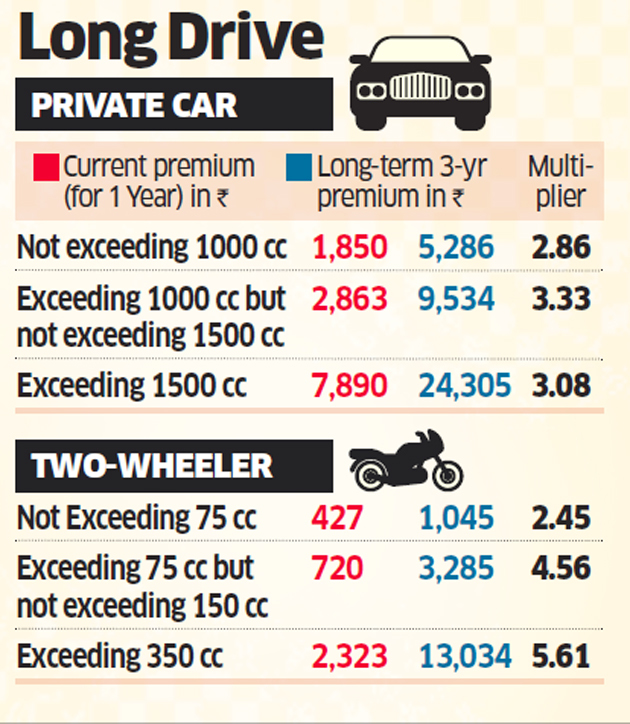 But the cost associated with such insurance has other effects.  The purchase of a new motorcycle may now be out of reach for some Indian people.  Currently, third-party liability premiums depend on the size of the bike’s engine.

No matter how its spread, buyers now must come up with the additional cost at the time of sale.  If a buyer is stretched to make the payment for the bike itself, how many buyers will not have the ability to afford the increased upfront premium?  Will this requirement reduce the number of potential motorcycle sales?

Time will tell if the increased insurance premiums will have any negative effect on bike sales.  In a country where a significant portion of the population depends on two-wheel transportation for day to day living, how much will this hurt India’s two-wheeled riding citizens?

What do you think of such a requirement?  Would it be beneficial in North America?  Would you be willing to pay for 5 years of third party liability up-front?  How does this requirement stack up against your home country’s third party insurance requirements?  Let us know in the comment section.