Ty Uehara is a 21-year-old Junior majoring in computer science major at the University of Hawaii at Manoa.  He uses a motorcycle for both daily transportation and recreation.  And, while he enjoys riding, he knows about some of the risks inherent in motorcycling.

Recently, a friend of his was injured in a motorcycle crash.  The crash left his friend with a broken pelvis and tailbone.  Even worse, the crash left the friend unable to move, or be seen by other motorists.  He had no way to call or get help.

This made it clear to Uehara that part of the problem is an injured rider’s inability to use a phone after a crash.  Uehara says that many motorcyclists carry their phones in a backpack or mounted to their bike.  In many cases, the phone is not accessible to the injured rider or the rider can not call on his/her own due to their injuries.

“If you were to get into an accident, you’d have no way of accessing your phone if you’ve been critically injured or if your bike is distanced from you.”

That crash got Uehara to thinking.  Perhaps there’s a way to design a helmet that could detect a crash and call 911 for help?  After thinking about it, he set about designing and building a helmet that could automatically call for help.  The result is Uehara’s ConTekt helmet which dials 911 after detecting a crash.

Talking about his invention, Uehara said:

“They’ll [riders] will be given a lifeline without risking any [further] injury by moving.”

Three major components are the key to the helmet’s design.  GPS for location tracking, an accelerometer to track abrupt changes and pressure sensors to monitor a high impact to the shell of the helmet.

Uehara submitted his design to the University of Hawaii’s 2019 Breakthrough Innovation Challenge.  The result?  First place and a check for $2,000. 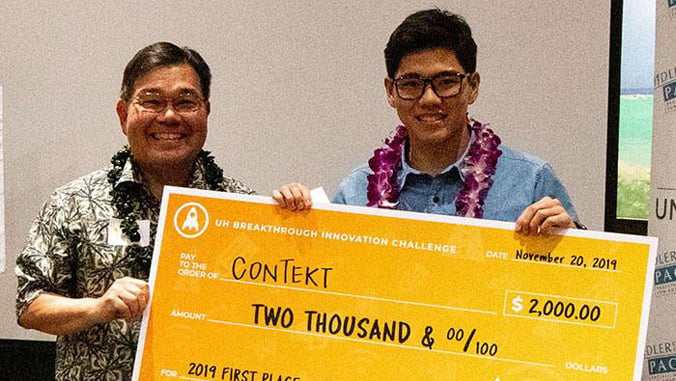 Uehara is using the prize money to submit a patent for the ConTekt helmet and the development of a prototype.  He still has work to do to get all the components to work together.  But, he is hopeful that he will have success in the future.