You may know about the Loudon Classic since it’s the longest running motorcycle race in America.  In fact, this June will be the 96th iteration of the Classic.

Unfortunately for Keene, the Loudon Classic has stolen much of Keene’s motorcycle thunder.  But some recently found 16mm film has once again brought Keene, New Hampshire’s motorcycling heritage to light.

From 1934 to 1936 Keene hosted the 200 mile National Championship Tourist Trophy (TT) race.  It was part of what was known as the Gypsy Tour where riders from all over the country traveled long distances to compete.  They would often sleep in tents around a campfire as they traveled.  Hence the Hollywood stereotype name Gypsy Tour. 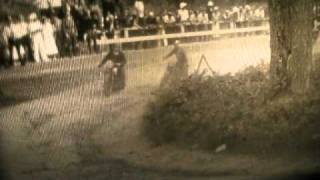 The Gypsy tour brought motorcycle racing to the streets of Keene, New Hampshire.

The idea of the Gypsy Tour was to offer competition for the riders and provide favorable publicity for the sport.  An article in the June 1922 issue of The Harley-Davidson enthusiast described the Gypsy Tour’s goals as follows:

First—To promote good fellowship among the riders of all makes of motorcycles and to give them a pleasure tour worth talking about until the time for the next annual tour rolls around.

Second—To give the general public a convincing demonstration of the practical transportation and pleasure possibilities of the motorcycle. The more tours there are and the more riders there are in each tour, the more effective the demonstration will be.

During Keene’s event, the town’s population more than doubled.  Reportedly, more than 15,000 spectators watched Harley-Davidsons, Indians and other motorcycles traverse the streets.

A 1935 American Motorcyclist Association (AMA) report of the event exclaimed:

“No one ever dreamed that we would be having 75 to 100 entries for an event of this type. Yet at Keene, N.H., 106 riders faced the starter which was the largest entry list ever gathered together.”

According to Alan Rumrill, the Executive Director of the Historical Society of Cheshire County:

“Keene was the racing center of New Hampshire.”

The event was important enough to garner the participation of two AMA Hall of Fame inductees.  According to the Harley Davidson Enthusiast, AMA Hall of Fame member Arthur “Babe” Tancrede and Maurice “Wild Kid” Cerrone both participated in the first event in 1934.  Tancrede won the event by four seconds over Cerrone.  In addition, Ben Campanale another AMA Hall Of Fame inductee racing in his first AMA race finished fifth.

Unfortunately for Keene, the national championships moved to Old Orchard Beach, Maine in 1937 and ultimately settled in Laconia, NH in 1938.  This event would later be moved to Loudon, New Hampshire and become the now longest running motorcycle race, the 95-year-old Loudon Classic.

“It had national interest and was so different from how they do motorcycle races these days.  The (spectators) were right on the street, and these weren’t racing bikes. They were just regular street bikes.”

“It was a time of great transportation development and innovation in the auto and motorcycle industry. You can see from the audience how much interest there was at that time.”

So while the annual Loudon Classic (which actually started in Laconia, NH) has taken most of Keene’s thunder, there’s no missing the fact that Keene was once the “the racing center of New Hampshire”