Aaron never intended to be a mentor to a large group of riders, but he has become one. Riding a KTM 500EXC round the world and taking it over 100,000km and still going he has created a large number of sales for the company and a massive worldwide following…but all Aaron loves to do is ride, and his KTM can be seen in more places around the planet than any single 500EXC ever! 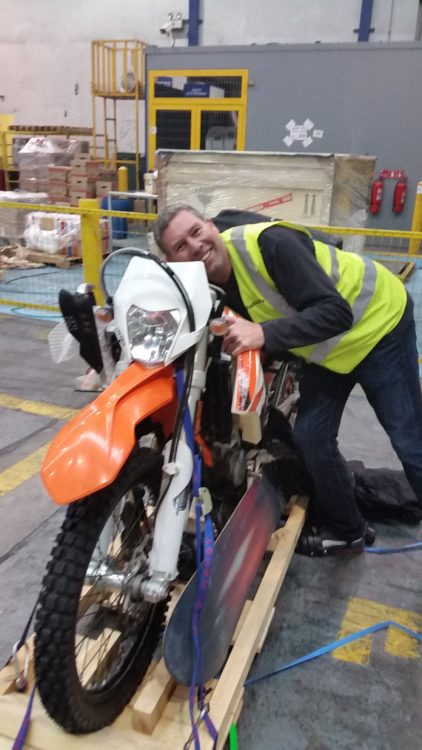 I’m not currently riding at the moment as I just returned to the States for the winter. 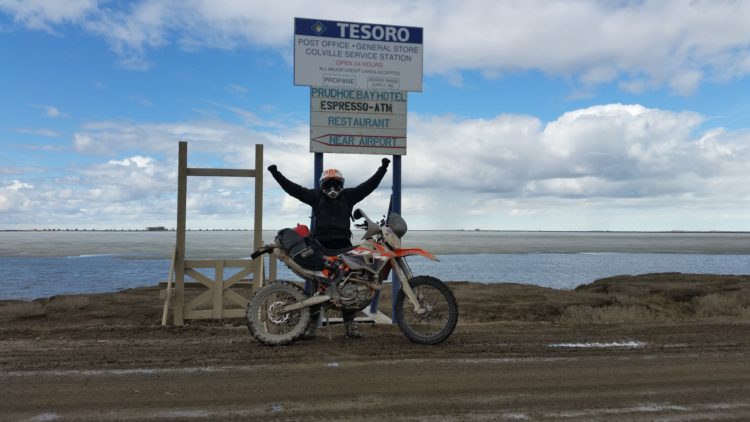 If I had an unlimited budget I think Toby Prices Dakar bike would look pretty nice in the garage. 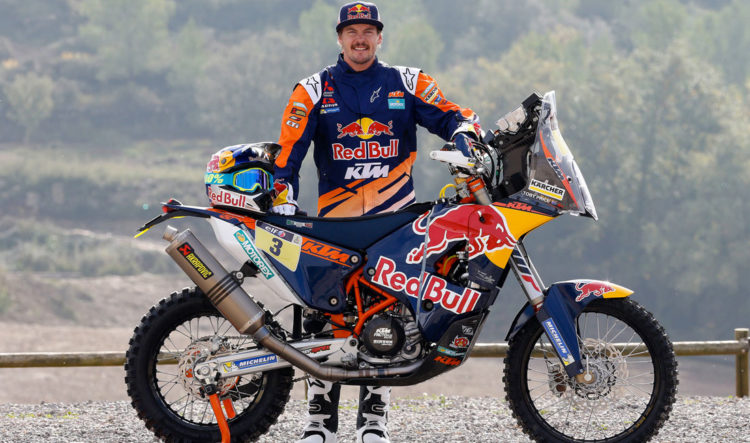 My favorite country to ride is a really tough question. I would say Peru is right up there along with the States mainly because of the Backcountry Discovery Routes ( BDR) on the west coast and Alaska. There is just so much terrain to cover. Rounding out the top three would be Morocco. 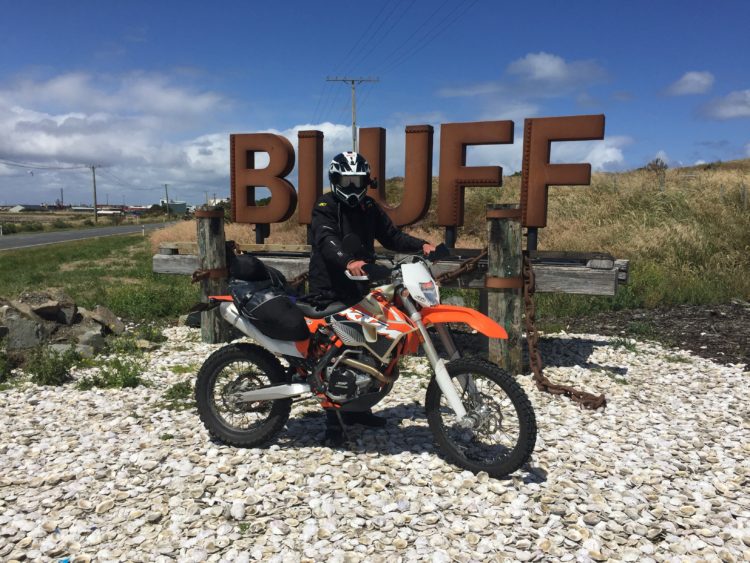 The Ruta de Las Lagunas from San Pedro de Atacama to Uyuni in Bolivia sticks out above the rest as it was one of the first more remote sections I had done alone. I had planned to take a couple days to do it but after 50k I got off my bike to see my roll bag clip had broken and I had lost my sleeping bag and most of my gear out of it. The tent then had rested on my exhaust and got holes burnt in it. I then didn’t have much choice but to ride to Uyuni in a day. It was a very long day. 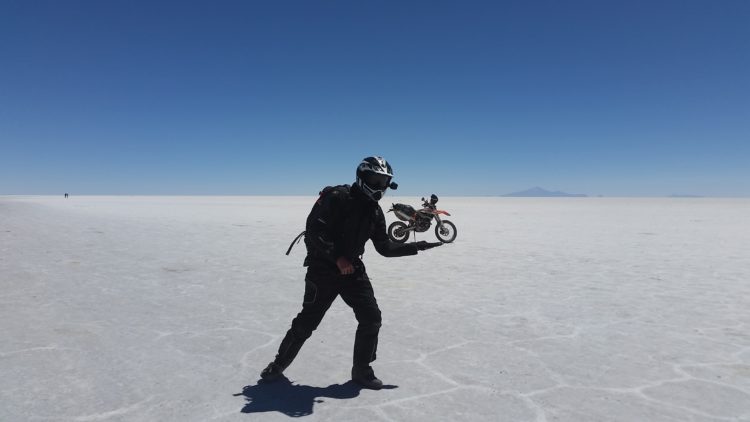 Mongolia has been a place I have wanted to travel to and ride for quite a while.

The scariest moment of my journey so far would be in Morocco when I made a last minute decision to do a route I hadn’t really researched and I ended up on a really rocky pass all first and second gear for a long time in the middle of summer. I then wasn’t able to find a track I had seen on the map I had planned on taking. I ended up in a little hut feeling like I was on the verge of heatstroke and I had gone through all my water. I wasn’t my biggest fan for a little while on that day. haha. 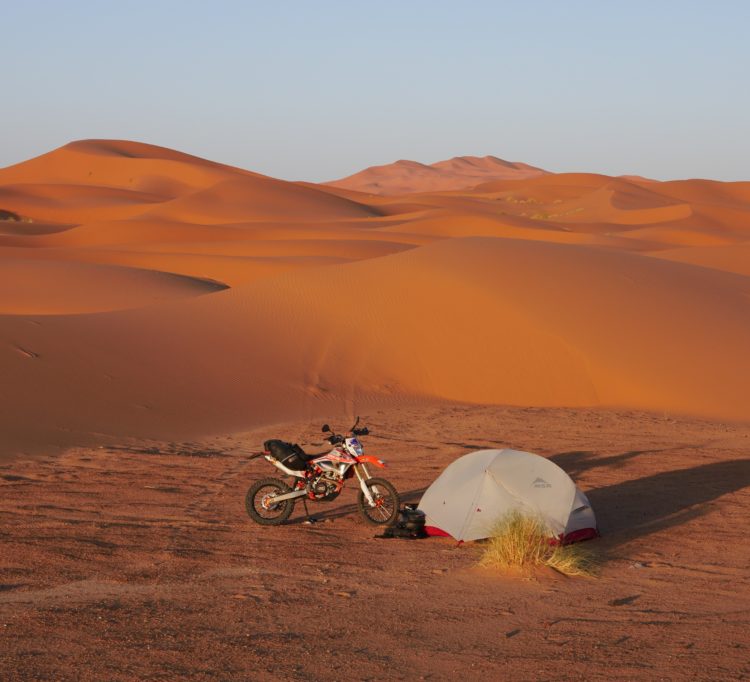 The most memorable day would be one of the longest when I rode from just out of Coldfoot up the Dalton to Deadhorse and the top of the Continent and back. I had fantastic conditions and it felt really good to have finally made it there and see my little blue dot on Google maps couldn’t go anymore further north.

I think everyone should travel. I think it helps you to really appreciate where you are from and what you have. It helps open people’s eyes to other cultures and people and realize their preconceived notions they have built up from media may not be the way it is when you are there first hand and there are good people everywhere just trying to live a happy life with their families. 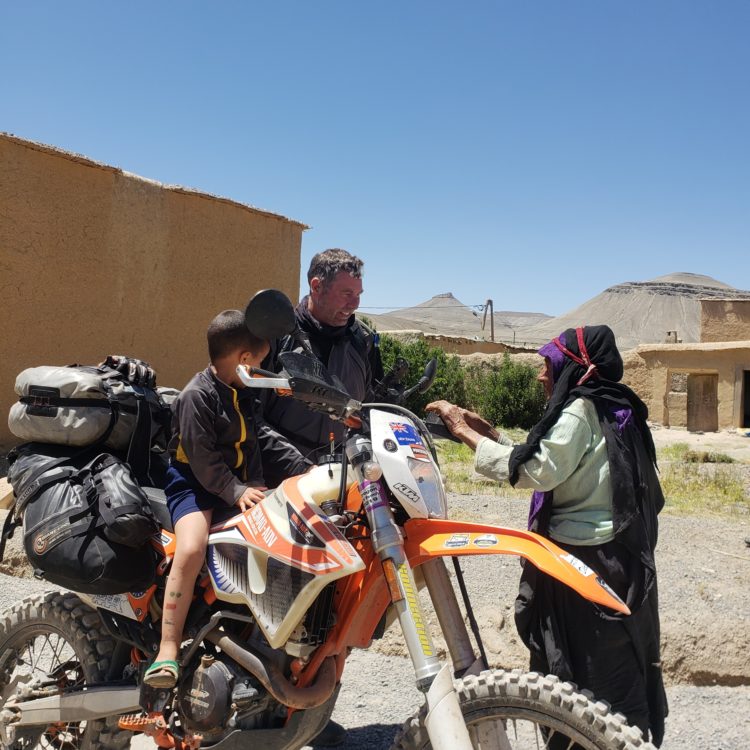 What does the word Adventure mean to me? Hmm, I would think whenever you start to feel like you are getting out of your comfort zone or going somewhere new and unknown to you. 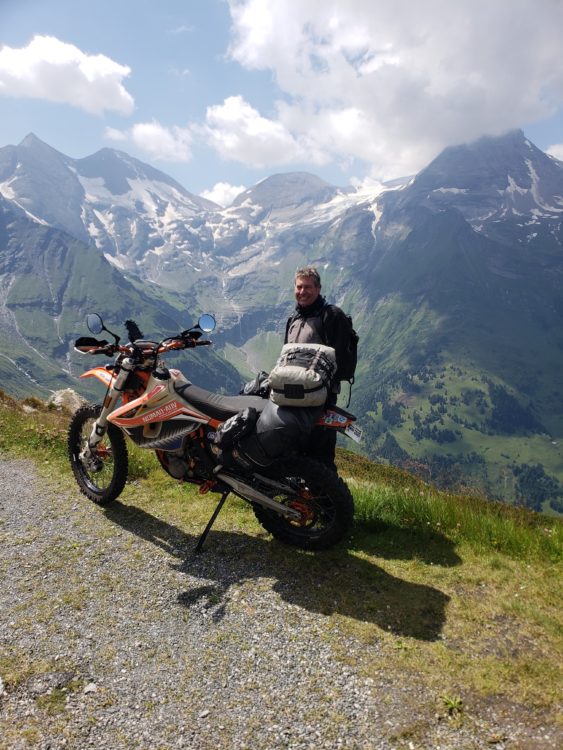 One of my favorite photos is one I took in Cappadocia Turkey on a perfect morning when I woke up to a heap of hot air balloons lifting off in front of me. It will be in this year’s Adventure Bike Rider calendar. 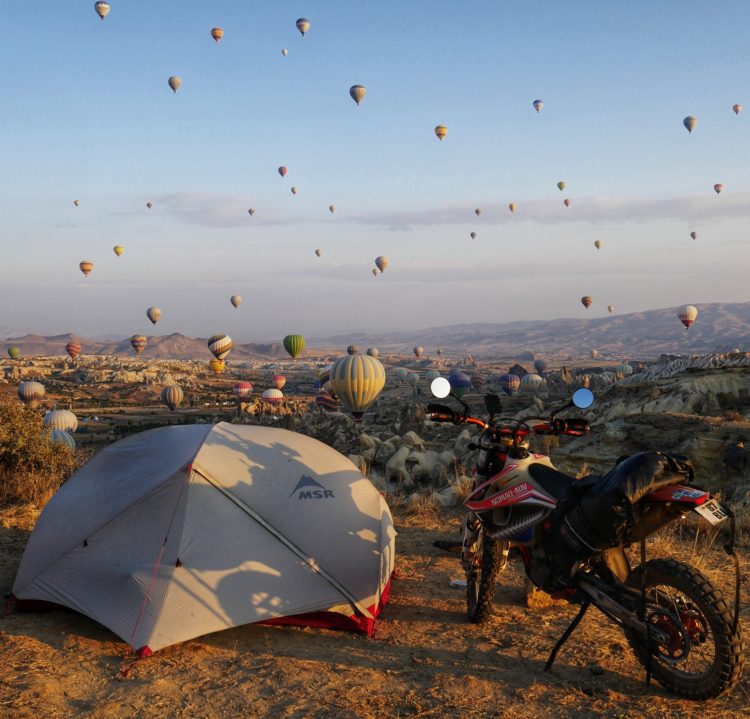 I’ve never regretted going to any country but there are a few I don’t feel the need to go back to. …. such a tough one as I think it’s hard because some countries may not have as good riding but the people and culture make it a place I would go back to. I have also had the opposite. Great riding but I’m not sure if I would go back. 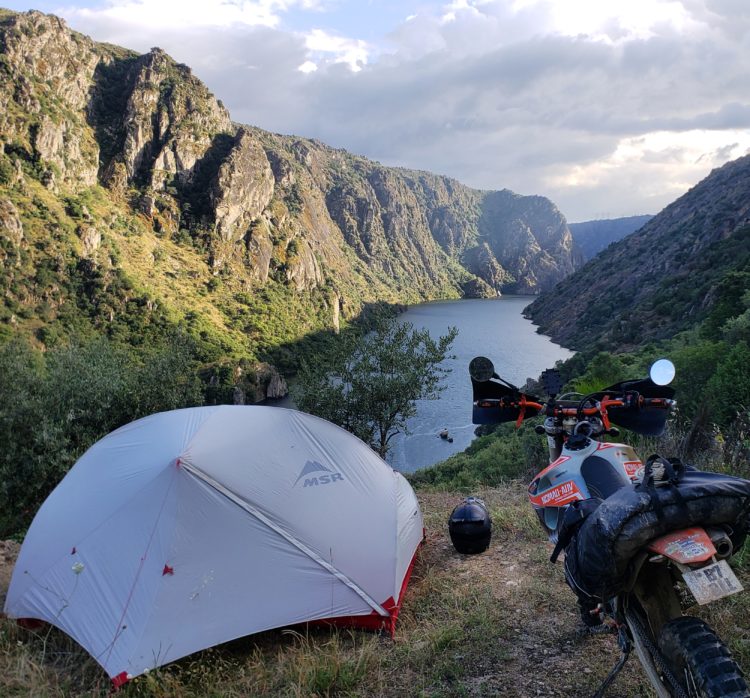 The KTM 500exc is a strange choice for an RTW ride, now you have over 100,000km on the bike are there any things you would change?

There isn’t anything I would change on my bike. I have Haan wheels with the cush drive which is a nice upgrade and the Scotts steering stabilizer is something I wish I had put on earlier.   I put a large tank and Seat Concepts seat on when I first got it which was a no-brainer. 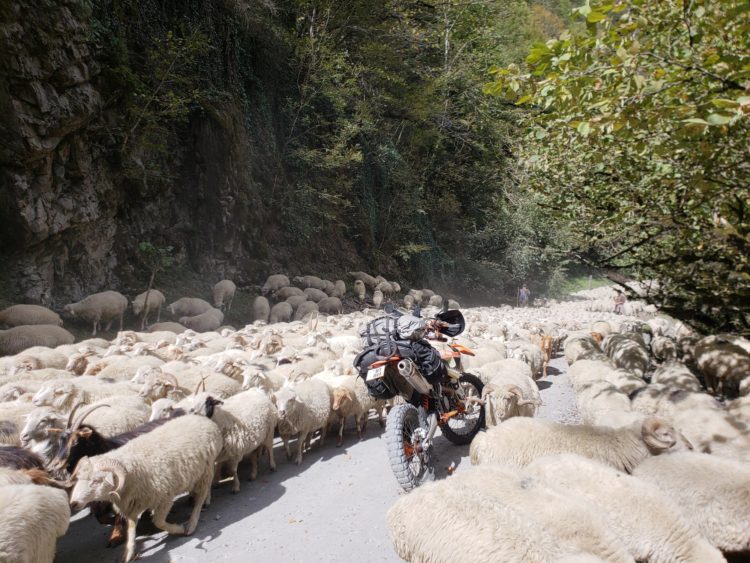 From Riding in New Zealand, it expanded to the Americas, and then you expanded it to Europe, next summer you will go back across the pond, what are you planning as a route

I started my ride in New Zealand. I went to the bottom of the South Island where I mentally started my journey but I also did another trip going to the top of the North Island. I had done about 7000k by the time I got it freighted to Santiago. I haven’t got an exact route planned but it will include going to some of the ‘Stan countries and then through Mongolia onto the other side of Russia but I’m not sure whether it will be to Magadan or Vladivostok at the moment. From there because I have already done S.E Asia before I’ll head to Indonesia down to Aussie and next minute bam New Zealand. 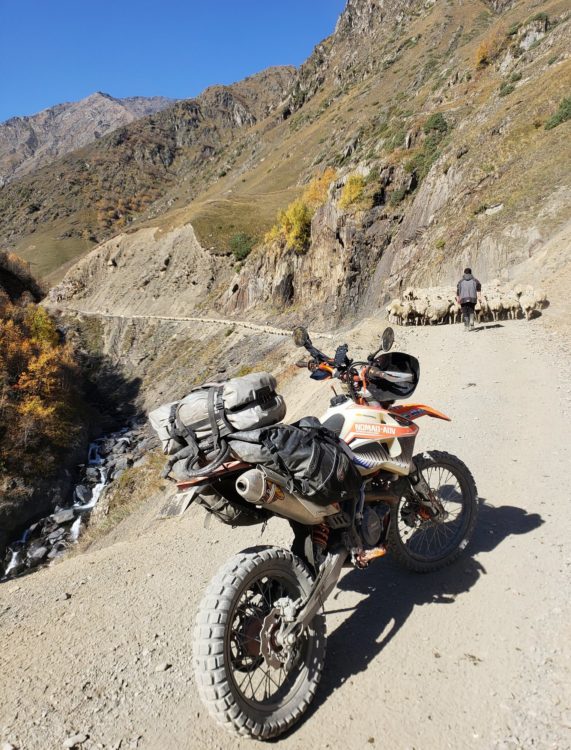 Has KTM contacted you in any way, on a regular basis I see people post that they think you should be a sponsored rider?

KTM hasn’t contacted me and yes I often have people saying they brought a 500 or 501 because of me showing how reliable they are and I should get some help from them in some form. Right now a motor rebuild for me would help so if someone who works for them with contacts is reading this…… 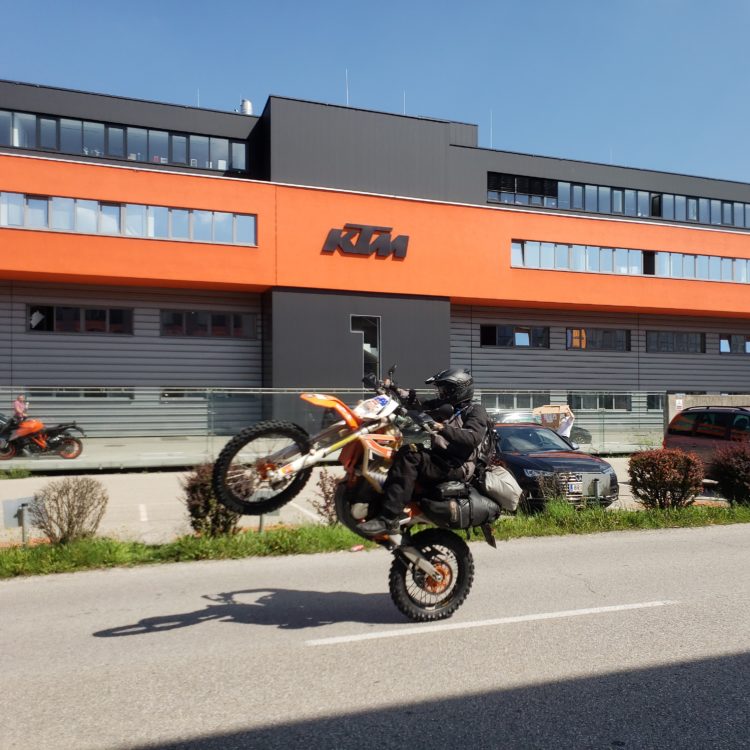 Where is your bike now and where is the motor?

My bike now is currently in a warehouse in Georgia. (The country) Well, I should say half of it. Because I did a heap more K’s than I thought I was going to I wanted to get the motor checked out and rebuilt before I carry on. I decided to bring it back to the States with me. Because it was a little heavy for one checked bag I pulled it to pieces and put it in two bags. Now I know how a drug smuggler feels. 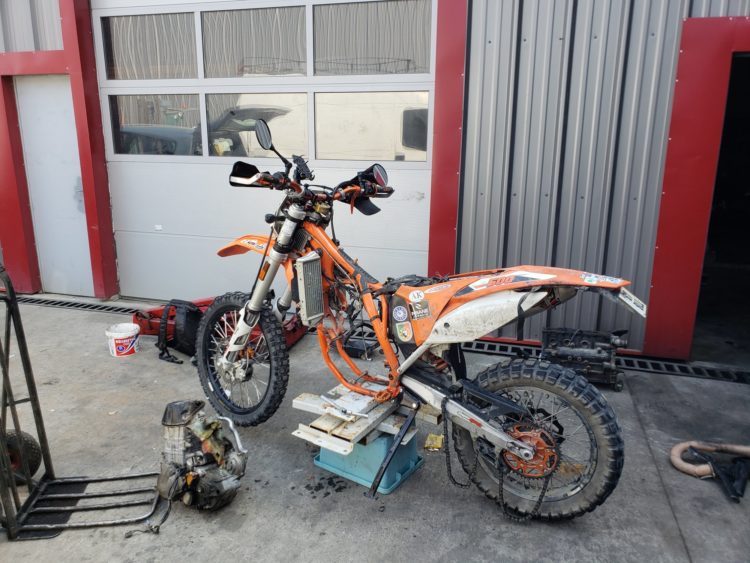 Are you doing upgrades or keeping it close to stock as possible?

I will keep the motor stock because I don’t need any extra performance that might sacrifice reliability.

From your experience; of all the years the 500exc has been built before your 2015 KTM and after it to current 2019, if you were picking another 500exc to do the same ride would you still pick the 2015 or another year?
It would depend on if the 2015 bike was brand new. If it was, I would pick it again because it has proven itself.  Having said that it wouldn’t worry me either way really as I wouldn’t have a problem doing it on a 2015 on up.
There is a little less oil capacity but you could put the big oily on it if you wanted a little more. I think what I have proved is what some people said were high hours for the 500exc isn’t really that high anymore. These bikes will last longer than people thought if you don’t ride it fully pinned all day.
Would you choose the same bike again?
That’s one I’m not quite sure of.  It still comes back to no one bike can really do the best job everywhere.  There were many times dealing with a shitty headwind somewhere where I was on a freeway or main road for hours I would have wanted to be on something else.
For me the benefits out way the negative. Also, each to their own as lot’s of people are happy to stick to the road and nothing wrong with that if that floats your boat. I do get a little annoyed listening to people who rant on about how tough the road or track was or is and in the photo, they are on an overloaded big bike with 70/30 tires.  I guess just different levels of riding which is fine but kinda keeping it real works as well.
Aaron also does a lot of quick updates on Instagram if you like visuals of the EXC in lots of different places, to follow him on IG click – Braaping Kiwi
For more interviews and a small look into the life of some inmates make sure you check out the Interview Series in the forum that has been running since 2007 – you can find it here