Probably my favorite Bond film as a kid was Goldfinger.  Its villain, Auric Goldfinger, was overwrought by the attraction of gold.  So he planned to increase his gold fortune by blowing up and contaminating all of the US’s supply of gold at Fort Knox.  The key to his plan was an aerial drop of poison gas to disable the troops below. 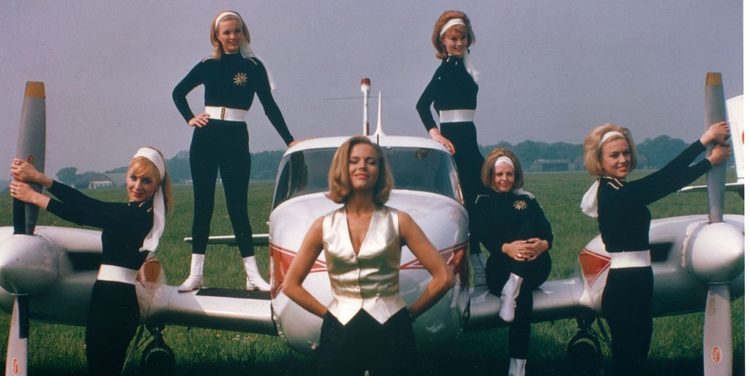 That poison gas was to be dropped by a squadron of all-female pilots.  The leader of the Femme Fatales was “Pussy Galore,” played by Honor Blackman.  And she did a fantastic job making Goldfinger one of her most well-known roles.

Blackman is not embarrassed; promotes feminism

With a movie role name like Pussy Galore, you wouldn’t be surprised if Ms. Blackman was a bit embarrassed.  But it didn’t stop her from reportedly loving the notoriety of the role she played.  Even though uptight censors changed Pussy Galore to Ms. Galore, it didn’t stop her from embarrassing uptight American interviewers.  She repeatedly used the character’s name over and over during promotional tours in the US.

She also played motorcycle riding Mrs. Cathy Gale in the British and later aired in the US TV series, “The Avengers.”  The role fit her well. 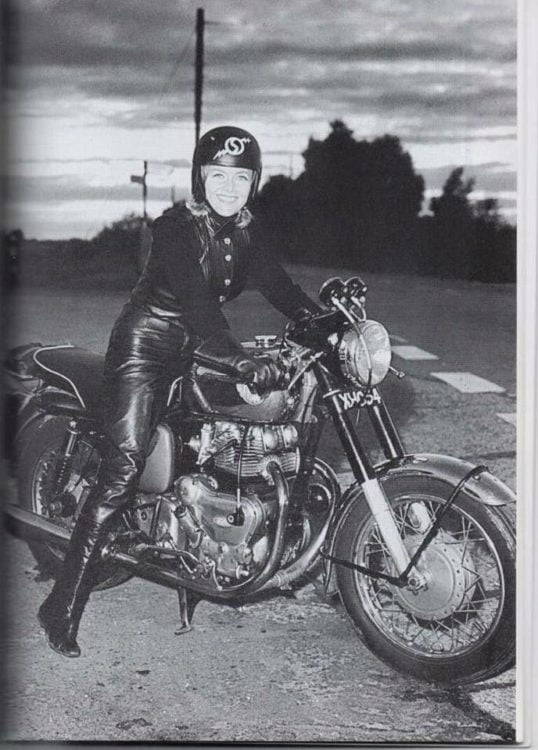 Honor Blackman while playing the role of Mrs. Cathy Gale in the TV series “The Avengers.”  Photo credit: Pinterest

As a result of her movie and TV acting, Honor learned much about martial arts, particularly judo.  She, together with some of her instructors, penned a book about self-defense.  For the time, it was a milestone book because it was aimed directly at women. Initially released in Britain, it was popular enough to have a US release as well.

Her most important and dangerous “role.” 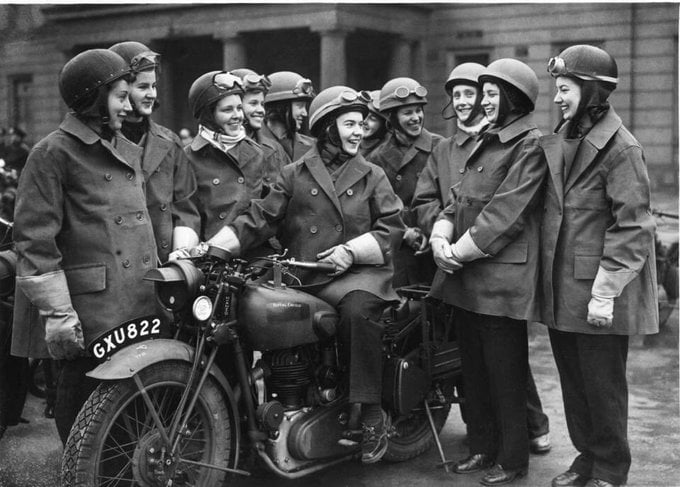 During World War II, Honor then in her teens, volunteered to become a motorcycle dispatch rider for Britain’s Home Office.  As a dispatch rider, she helped play a crucial role in the war effort delivering vital information and messages between headquarters and remote field units.  Often riding while air raid sirens were sounding.

When asked about her dispatch riding in World War II, Ms. Blackman had this to say:

“I was only just old enough to ride a bike and my mother was terrified, but I thought it was heaven. It was pretty dangerous because we were in the midst of war and had to mask the headlights during the blackout.”

“Bombs were falling, but the roar of the motorbike engine used to drown out the sound of the doodlebugs (the German V1 rocket bombs) so we never heard them coming.  It seemed terribly exciting to me.”

Oh, my word!  Ms. Blackman, you have my highest regard.  I salute you for your feminist stand and even more for your patriotism.  Rest well, Ms. Blackman.  You certainly have earned it.  Ms. Honor Blackman was 94.