It had been a sleepless night. I wasn’t exactly sure what had kept me awake other than underlying nerves of the unknown the following day. Rising early, the air was crisp and for the first time in weeks; the sun had come out. I decided to make an earlier start than usual to get in line for the arduous border crossing experience, from Europe to Russia.

Rolling up to the border zone it was eerily quiet. The lines of trucks and beaten up cars I had expected to join were nowhere to be seen. Passing quickly through the EU side, I was waved on to begin proceedings to enter Russia with my motorcycle. I had been planning this part of the trip for quite some time, and it was imperative to my route for entering Mongolia overland.

As luck would have it, my only companions waiting to be processed were a group of fellow adventure riders from Canada. Striking up a conversation, I learned that they were also headed for Moscow and that one of their group was, in fact, a Russian national, fluent in the language. In an instant, my nerves dissipated. I realized my only concern had been my inability to communicate, through a potentially confusing mind field of bureaucracy.

Whilst it was great timing to meet up with fellow riders and have someone be able to translate for us, after the crossing was complete, I felt confident that it would have been relatively simple to achieve without any assistance. The Russian guards, whilst brisk in manner, were also keen to keep everyone moving and it appeared my timing had been lucky in more ways than one, with a long line forming behind us. There are many overlanders who have forged the route before me and it was, whilst slow, a well-defined process which the guards were familiar and helpful with. 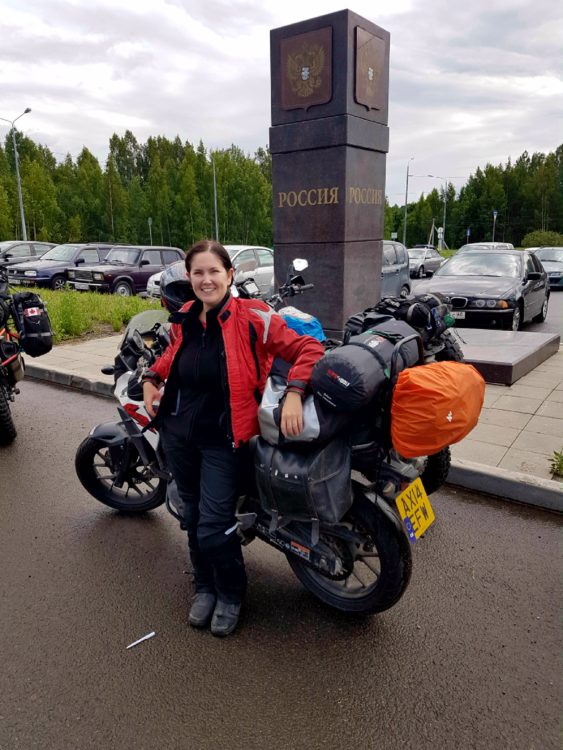 With the formalities behind me, I enjoyed lunch with the Canadian group before they headed further down the road to gain some miles before nightfall. I had been unsure how long the crossing would take, five hours in total, so planned to only ride on for a few hours before calling it a day.

Stopping for the night in a small village hotel, I was immediately greeted by another guest sitting outside smoking. He was incredibly inquisitive about where I was from, how I came to be in Russia and if he could take a photo with myself and the bike. This interaction set the tone for my entire time in Russia. At every stop I was treated the same; with great amazement, enthusiasm and well wishes. I was surprised for the second time that day just how different things were from the image I had in my mind.

The following days ride into the country’s capital, Moscow, was a great few hours of smooth tarmac flanked by endless forests. There was a feeling of vastness that I had never experienced before, even recalling it now, I remember it being a special moment on the trip. I had expected to feel restricted in a way, purely due to the political environment and what I perceived as a wariness towards foreigners, yet it was the exact opposite. It was the freest I had felt in a long time.

Arriving in Moscow early afternoon, the roads were easy to navigate, and I found my accommodation and headed out to explore. Meeting up with my new Canadian friends from the border, I had an instant tour guide which was wonderful. Moscow was abuzz with tourists from all over the world enjoying the final few games of the World Cup 2018, yet there was still a good vibe of locals going about their business. 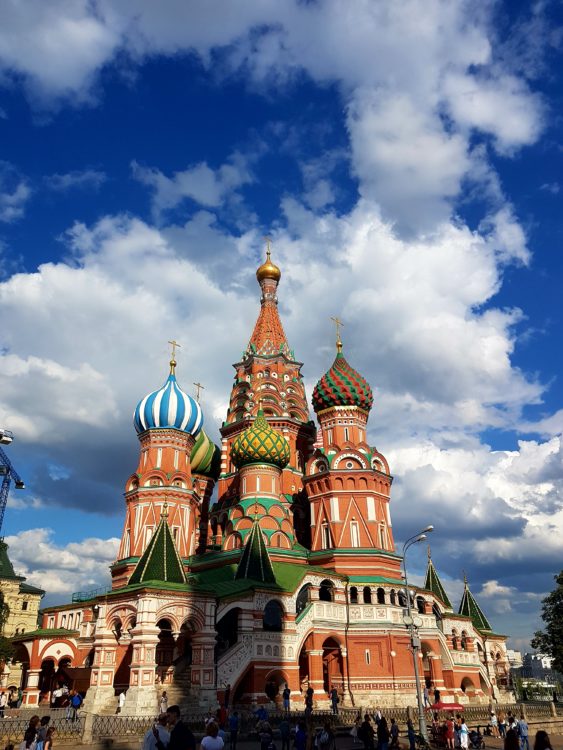 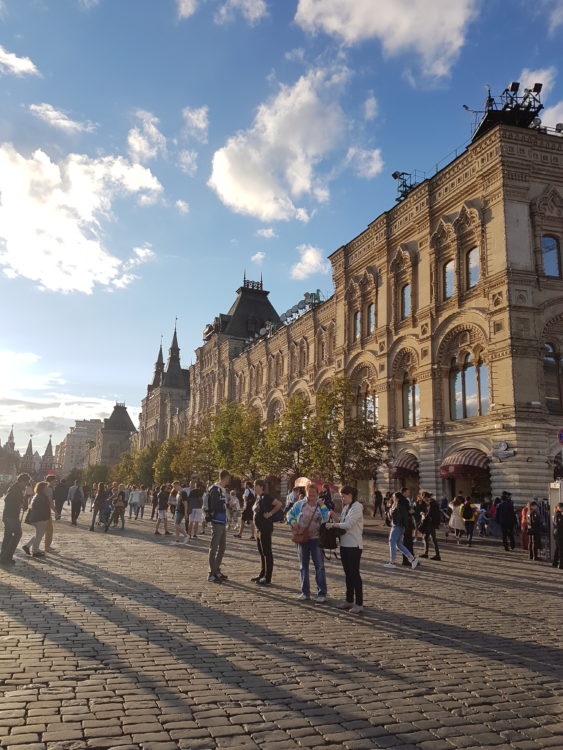 After a few days playing tourist, it was time to hit the road to continue my journey east. With thunderstorms overhead and some of the biggest raindrops I have ever seen, it was a wet few days navigating the never-ending over taking of cars and trucks on the single lane highway. In such a vast country, there is little in between the larger cities and towns however fuel was readily available and very cheap.

The system for filling up is simple once you get the hang of it. First you park next to a pump, go inside and use sign language to let the cashier know which pump you are at.  Then the fuel grade you wish to use, along with the number of litres. At first, I always over-estimated how much I needed, however, there is never a problem with receiving a refund on any unused fuel. After doing this several times a day for weeks on end, I became pretty good at knowing my tank! Cards and cash are accepted everywhere which makes things very easy.

I did experience mechanical issues as a result of the fuel quality, with a blocked fuel injector filter and a substantial amount of water contamination. Thankfully I was well looked after at the local Honda dealer, with them stopping all other work to get the bike back on the road as quickly as possible.

With beautiful cities to explore like Kazan, Ufa and Omsk in western Russia, it is akin to being in another part of Europe. The architecture is stunning and unique, the food amazing and the culture wonderful. I enjoyed my time exploring this part of the country and for all the wonders Russia had to offer, the hospitality of its people was the standout. 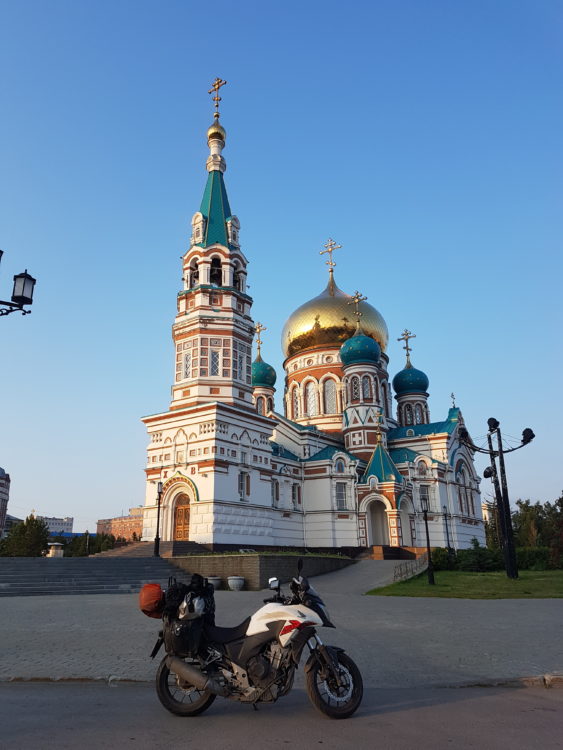 The colours of Russia are beautiful

In terms of riding, the roads were good in parts, and in other under significant construction which posed lengthy delays. The further east you traveled the conditions deteriorated, however nothing worse than anything than in Asia or alike. With my goal being entering Mongolia on the western side, I can’t comment on the infamous Summer Road, however other riders at the same time I was traveling were reporting back horrendous conditions, with many forced to turn back. The tarmac now continues all the way across to Vladivostok, so it is now totally achievable to cross the width of Russia without carrying special equipment or supplies.

In a country this vast, there are many boring miles to cover with a few notable exceptions. The ride across the Ural Mountains is stunning and one of the highlights of my time there. As you ascend higher and higher, the views of quaint villages and farmland extend forever in the valley below. There are gentle rolling curves, switchbacks and perfect road conditions. With this being a popular tourist area, there is no shortage of food and fuel and despite the many trucks also sharing the same road, it is a fun ride nonetheless.

As I headed further east, the scenery changed from tall forests to open plains, the villages got smaller and the availability of cheap high-quality hotels lessened. The last major city before entering into Siberia was a welcome relief. Here in Novosibirsk I met with another group of riders, this time Russian locals. Three of them all on BMW 1200’s, doing a pilgrimage across their own country from east to west. Over a lovely dinner, they explained their local customs, Russian food and of course, how to drink Vodka.

Saying our goodbyes, they headed on whilst I remained for a rest day and to have my bike serviced. This wasn’t to be the last I saw of my new Russian friends. As I made my way a day later towards the town of Krasnoyarsk, I was met on the side of the road by yet another member of their group. Out of nowhere he stopped, looked at my license plate and exclaimed: “You are Kylie!” The rest of the group were now waiting for the two of us to ride the 1,000km to meet them, before heading into the less hospitable part of Siberia.

After 15 hours on the road, we finally arrived. Cold and wet from hours of rain we had a late dinner, with vodka of course and planned the coming days. From this point on there were no hotels or guesthouses to speak of and it was agreed we would stay together until I reached Ulan Ude where I would head south towards Mongolia, whilst they continued on to Vladivostok. 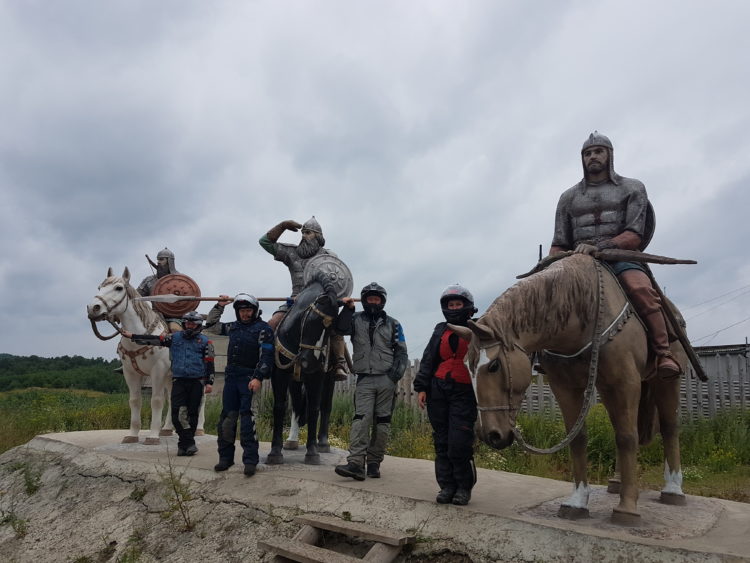 On our way to Lake Baikall

Spending time with this group of local bikers who were nothing short of generous, respectful and kind the entire time I was with them, made my time in Russia so memorable. From roadside breakdowns to late night dinner and drinks, it was nice to have some company, if only momentarily. As we parted ways after almost a week spent exploring some of the most beautiful scenery Russia has to offer at Lake Biakall, it was a sad goodbye. 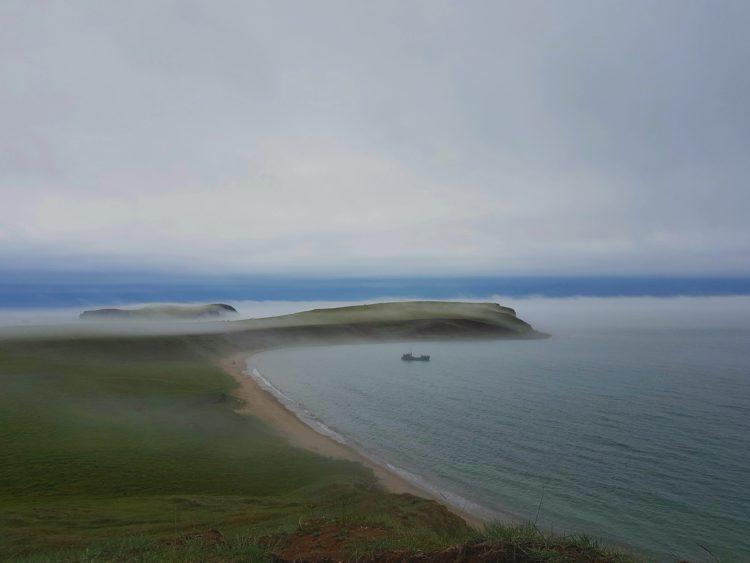 Lake Baikall, the largest fresh water lake in the world

Like most people who travel extensively I know that people, no matter what you hear and see on the news, are inherently good. This was proven over and over during my time in Russia, to the point where it was without question my favourite country in terms of the people and their openness to travellers. It was a wonderful experience and one I could only recommend you experience for yourself.