There’s quite a bit of grumbling in the ADV community that ADV bikes have become too big and too heavy.  These folks also complain that big ADV machines have too much technology that would be difficult or impossible to fix in the field.  Well for these people, Portuguese manufacturer AJP may have a solution.

You may not have heard of AJP, but they are a small motorcycle manufacturer based in Portugal.  Their product line consists of Enduro, Supermoto and more recently an “Adventure” model called the PR7 Adventure.

A dual sport or adventure bike?

Looking very much like a rally or dual sport bike, AJP claims that the PR7 is a capable adventure travel machine.  Many of the bike’s key features point to its off-road bias but that doesn’t mean it can’t handle “adventure” duties.

The machine is quite narrow and weighs in at a claimed 363 pounds (165 KG) filled with 4.5 gallons (17 liters) of fuel.  That wet weight is not bad for a dual sport machine, never mind an “adventure” bike. 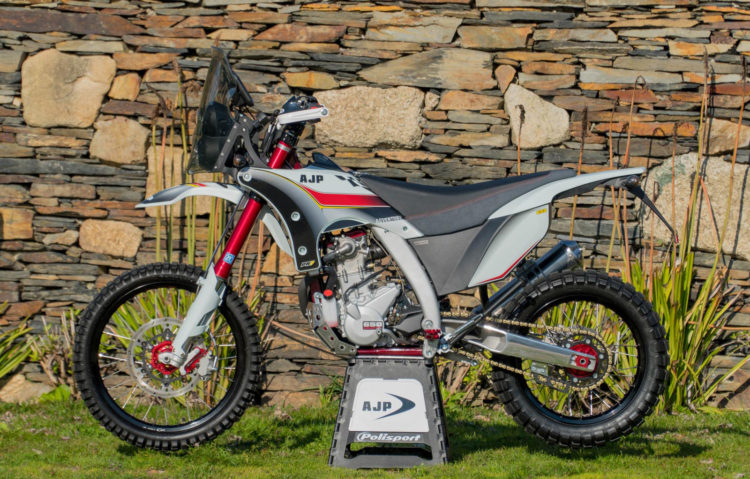 Left side view of the PR7. Photo credit AJP

The bike is built around a hybrid steel and aluminum twin-spar frame with an aluminum swingarm.  Cradled inside the frame is an SWM built, fuel injected, 600 cc liquid cooled engine.  It uses a balance shaft to smooth out vibration and reportedly puts out about 50 HP.  That’s not a gigantic amount, but it’s more than enough to travel significant distances and get you where you need to be without stressing the engine.

The front fork consists of a 48 mm Sachs upsidedown unit adjustable both for rebound and damping.  It provides approximately 11.8 inches of travel.  At the rear, a piggyback Sachs preload, rebound and, damping adjustable shock provides 12.5 inches of travel.  These specs may give you a feel for the PR7’s off-road capabilities.  As you can imagine, all that suspension travel ups the seat height to a lofty 36.2 inches.  It’s the price you pay for all that suspension travel.

The wheelset is comprised of a 21-inch front and an 18 inch rear.  Stopping power comes from a pair of AJP branded calipers.  A two-piston caliper clamps on a 300 mm disc up front and a 240 mm disc at the rear. 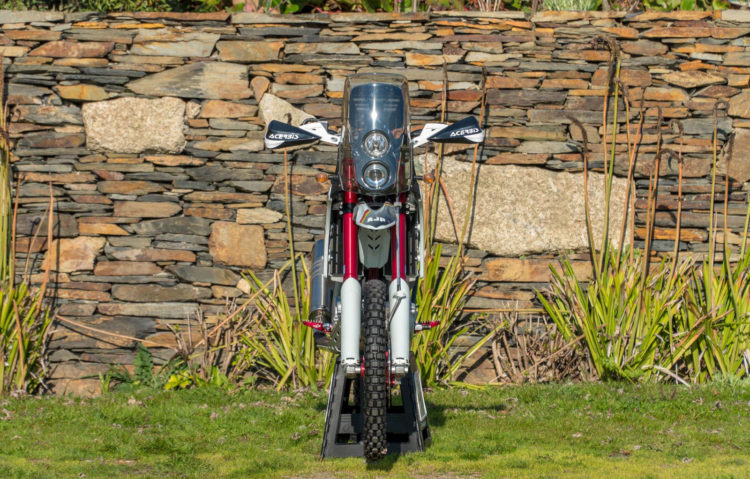 The PR7 Adventure is equipped with a wet clutch, a 6-speed transmission, and a chain final drive.  That 6th gear should help with long higher speed pavement duties.

The PR7 Adventure has some features that make life on the “adventure” road easier.

The oil can be changed by removing a single bolt for the skid plate and the two oil drain plugs.  Access to the oil filter does not require the removal of any panels.  Remove 3 bolts and the filter cover and the filter is right there.  Easy.

With chain final drive, all you have to do is keep the chain lubricated and clean and you should be good to go. Excellent. 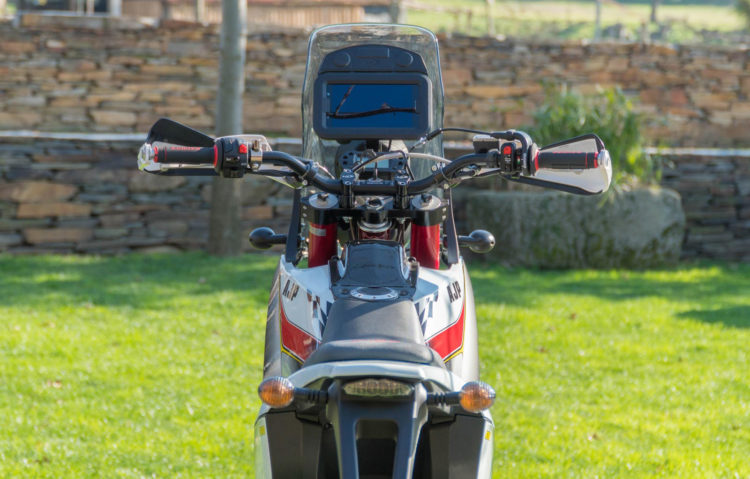 The PR7 tower holds a tablet with many functions. Photo credit: AJP

So maintaining the bike should be fairly simple.  That’s a nice trait when you are out on the road and don’t have to bring the bike to a dealer for the simple stuff.

So if we’ve established that maintaining the bike on the road is not a problem, what else should we think about to go on a long adventure.  The first thing that comes to mind is “simplicity” and it seems like the PR7 Adventure has it in spades.

First, there is no traction control or rider aids.  Some would call that a disadvantage, but others would call it an advantage because simple is easier to maintain and/or fix.

There is one piece of technology on the machine that is very interesting.  The bike houses a tablet that can be used for a number of tasks including navigation, service manuals, email, and time/speed/distance.  It’s not clear whether the tablet is waterproof and that’s an important feature.

That said, you can ride the bike without the tablet as there is a separate dashboard on the bike that houses the traditional functions of a dashboard.

The exhaust is upswept and looks fairly tucked in close to the chassis.  It should give plenty of ground clearance and looks like it could survive a fall on the right side of the bike.

The seat is quite narrow and has a shape that looks to be more like a racing seat than a long distance seat.  But there are plenty of densities of seat foams out there.  Getting to a long distance comfort level should not be too difficult.  Besides, the narrower seat makes moving around on the bike easier on difficult terrain.

Fuel is stored under the seat moving the center of gravity lower.  It sort of looks like the solution KTM came up with on their 690 Enduro.  But to be honest, I don’t have the specs on it so I can’t say how the setup actually works.  Since it does look like KTM’s setup, I do wonder if there’s a sturdy subframe to hold soft bags/panniers.  I’ll continue to look for more info on this particular trait.

The windshield on the PR7 is on the smallish side and that might make traveling a bit more tiring.  But there are many ways to increase the size of a windshield from clip-on deflectors to bolting/taping on a piece of plexiglass.  I wouldn’t be too worried about it. 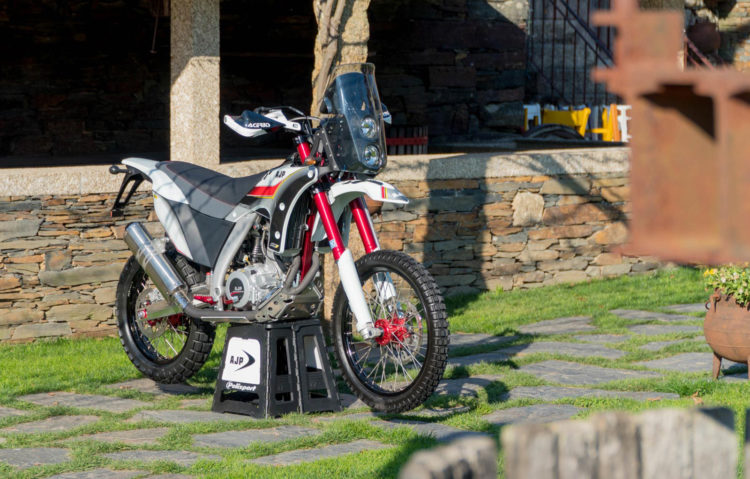 Going for a ride

So all in all, I’m sure you can tell I’m very interested in this machine.  I should probably go out and test ride/buy one, shouldn’t I?

But therein lies the problem in the USA.  The PR7 has been available in other parts of the world for a while.  But it hasn’t been submitted to the EPA for testing and hence can only be sold in the USA as an off-road only machine. To me, that’s a shame since the bike seems to have the specs to make an excellent “adventure” platform.

What do you think about the AJP PR7 Adventure?  What excites you and what doesn’t?  Perhaps with enough response, AJP will bring the bike to the USA.