But there is one electric motorcycle company that you may not have heard of.  Alternet Systems subsidiary ReVolt Electric Motorbikes are producing an electric motorcycle and claim to already have signed orders totaling $1.5M.  In a series of press releases, the company said that it had received a $1M fleet order from a Nairobi, Kenya ride sharing client.  It also said that it had received two other orders totaling $500K.

Where are the bikes?

So how come we haven’t seen the bike or heard of any rollout for their electric motorcycles?  Well, it turns out that there is only one copy of the pre-sold bike.  The new orders were apparently completed when the bikes passed a “pilot” test.

Based on a classic motorcycle

ReVolt says that they have partnered with an unnamed manufacturing company to produce their electric motorcycles.  Surprisingly, the baseline motorcycle is the 1930s era BMW R71 with a German Army style sidecar. 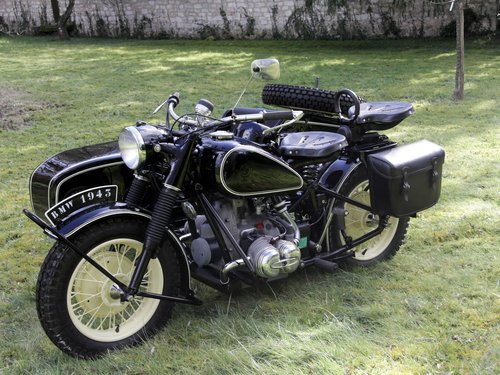 Given that ReVolt’s first customer is a motorcycle rideshare company, the sidecar makes sense.  But it’s somewhat surprising that the basis of the bike is a 1930s era machine.  Nonetheless, ReVolt’s iteration of the R71 is electrically powered by a lithium-ion battery. Interesting.

“…integrate Alternet’s patented lithium battery technology into a new line of Electric Motorcycles for both domestic and international markets.  ReVolt will start with the production of retro-classic designs for the US market and later introduce a utility daily driver for everyday transportation in developing economic regions.  The first retro-classic design electrifies the rich history of the BWM R71 motorcycle.”

Going after the rideshare market

That’s an interesting statement considering ReVolt has yet to produce a single machine for public purchase in the US.  Apparently, ReVolt has decided that sales to the international rideshare market outweigh sales to the leisure consumer market.

Interest from the investment community

So it seems like ReVolt’s parent company, Alternet feels it is a battery company focusing on ways to use it’s patented lithium-ion battery technology.  They say that a report by Global Market Insights lead them to believe that the electric motorcycle market will exceed $22 billion by 2024.  Alternet (through ReVolt) wants a piece of the electric motorcycle market pie.

Alternet has yet to publish any specifications for its “patented lithium battery technology”, nor have they unveiled the single working electric motorcycle.  So perhaps more than a little skepticism is in order.

Alternet listed Over The Counter

But one investment company apparently thinks Alternet (OTC:ALYI) may be onto something.  Goldman Small Cap Research (not related to Goldman-Sachs) issued coverage on the company giving it a “speculative buy rating” with a 1-year price target of .09/share.  The stock is presently trading at .04/share.

Lastly, Alternet has latched onto a new technology that it thinks will change the electrically powered vehicle world.  Remember, Alternet said it concentrates on “sustainable power solutions”.

Alternet now says that it is researching a previously untapped power technology.  One that is very sustainable and without the eco issues presented by lithium.  That power technology comes from a source that you’ve heard of before, but probably never thought would be used for power.

I’ll cover the new source of power in the next article on ReVolt and Alternet.