Motorcycles make use of a wide range of metals, some elemental (unalloyed) and others as alloys. One of the most important, used mostly as an alloy, is aluminum. It’s an interesting substance and its origin ties in with one of my very favourite touring destinations.

Copper was first used by human beings about 11,000 years ago. Gold and silver were probably utilized at about the same time. Iron followed some 7000 years later, 4000 years before the present. Then aluminum was first extracted – a little over 190 years ago. Why did it take so long, and why does it have two names – aluminum and aluminium?

The name is easy. Sir Humphry Davy, who first worked out that it had to be possible to make a metal based on alum, couldn’t make up his mind what to call it. His first choice was alumium, but a few years later he changed that to aluminum. Finally, in 1812, British science texts began to refer to it as aluminium to be more in keeping with other elements like potassium and sodium.

The early problem was that it was difficult and expensive to make. It’s not just a matter of smelting. The first extraction didn’t come until 1825, when Danish physician Hans Christian Anders… no, no, Hans Christian Oersted announced that he had succeeded by using electrolysis. Conveniently, a French geologist called Pierre Berthier had discovered the primary ore of aluminum four years earlier. He found it near, and named it after, the tiny French town of Les Baux. He called it bauxite.

It may have been the only game in town, but the Reine Jeanne was well priced and had good food.

Here comes the segue. Les Baux, or Les Baux-de-Provence to give it its full name, makes a wonderful base for motorcycle explorations of the Alpilles, a small mountain range protected as a nature park, and the other nearby parks of the Camargue, Cevennes and Verdon. It sits high up on a steep crag, hugging the remnants of its castle, and has been described as one of the most beautiful villages in France. It gets a million and a half visitors each year. Doesn’t sound much like a base for exploring? Well, there’s a secret: you need to pick your time. 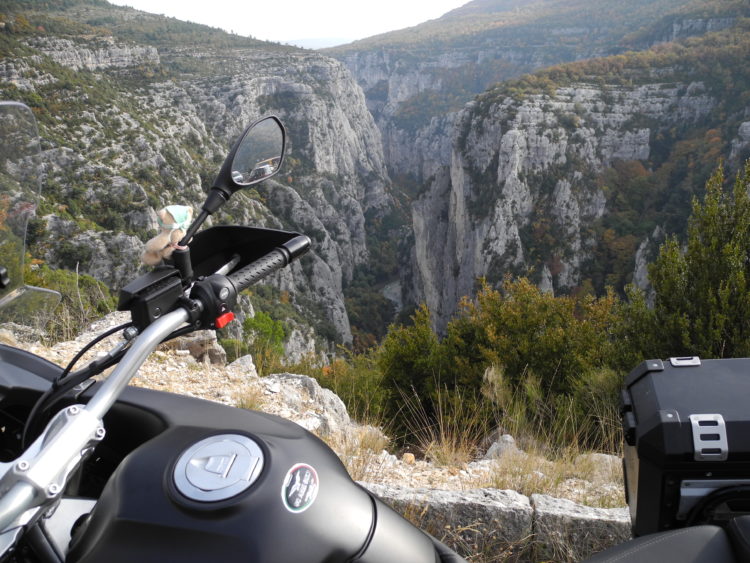 The Gorges de Verdon. There’s a road all the way around this natural marvel.

Like many destinations in Europe, Les Baux has a high and a low season, but the climate imposes its own limitations apart from the tourist seasons. To avoid the tourists, go some time from March to May or from the beginning of September to mid-October. Before March it’s cold, and although this general area is not especially high, it does get snow. Fortunately, there is not usually so much that you have to worry about snow closing passes. By mid-October, at the other end of the season, the rain is beginning to fall.

Out of season, much of the town is closed and what is still open offers seriously reduced prices. I stayed there in mid-October, just in time for the rain to start, but I found the town pleasantly quiet. Only one hotel, the Hostellerie de la Reine Jeanne, was open and the restaurants were closed except for one rather good café. The lack of restaurants didn’t matter because the hotel offered excellent and reasonably priced meals. My room had a huge balcony that looked out over the adjoining valley. A couple of souvenir shops were still open and although there are no military re-enactments in the off season there was plenty of opportunity to explore the huge castle ruin that looms over the town. 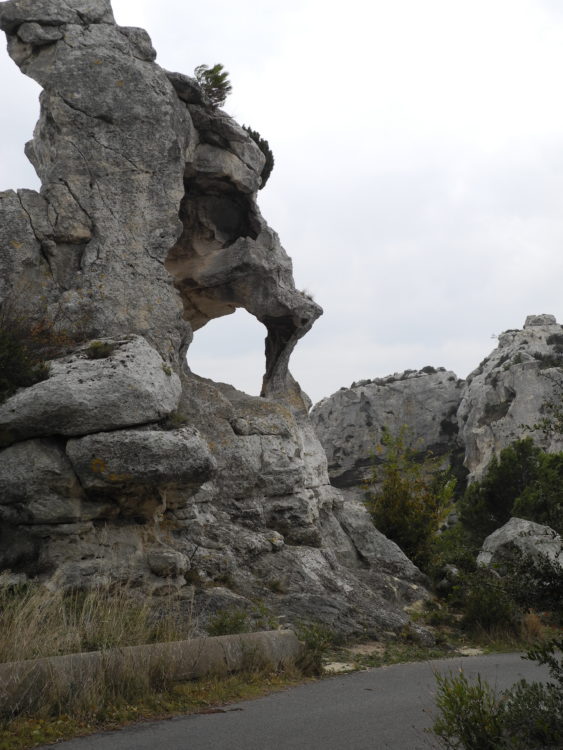 Best of all, the minor roads that thread the Alpilles and the Verdon were empty except for infrequent local traffic. I explored mainly to the west and east in the Alpilles Nature Park, but spent one day day riding through the Camargue, a low-lying waterworld south of Arles which is also a Nature Park. Unlike Avignon to the north which is effectively closed to traffic, Arles is accessible and it’s easy to get to the Yellow House and the Fondation Vincent van Gogh, a beautiful museum.

Les Baux is closed to cars, but my bike fitted through the barriers at the bottom of the town and, in the usual French manner, that seemed to be enough to entitle me to ride it through the streets. The Reine Jeanne had an empty lot across the road, inaccessible for cars but just right for motorcycle parking.

Les Baux makes for a holiday in southern France that couldn’t be more removed from the modish hustle of the Cote d’Azur and Monaco, but here’s a snippet you may find interesting: the family that rules Monaco traded Les Baux for it. A good choice? Depends on your point of view, I guess.

Oh, and aluminum. Did you know that it was originally twice as valuable as gold, and that it was used to make jewelry? It makes sense when you consider some of the jewellery-like frames that modern motorcycles boast.