The KTM Ultimate Race is KTM’s in-house amateur’s competition, run along similar lines to BMW’s GS Trophy. Riders earn their spot in the Ultimate Race by winning the KTM Adventure Rally challenges in their own countries. From there, they travel overseas to compete against each other on 790 Adventure R motorcycles.

This year’s Ultimate Race ran at the same time as the Merzouga Rally, with KTM offering a rally team-like experience to the Ultimate Race participants, with mechanics, coaches and other support staff. All in all, there were six days of racing, covering 1000 km of Morocco’s desert terrain.

“It was extremely tough, especially in the last stage,” Myers said of his win. “I just kept watching and thinking this has got to end! It was so hard. I was following Jordan (Huibregtse), he crashed, then he followed me, then I crashed. And we just kept doing that for the whole stage. But what an awesome experience.” 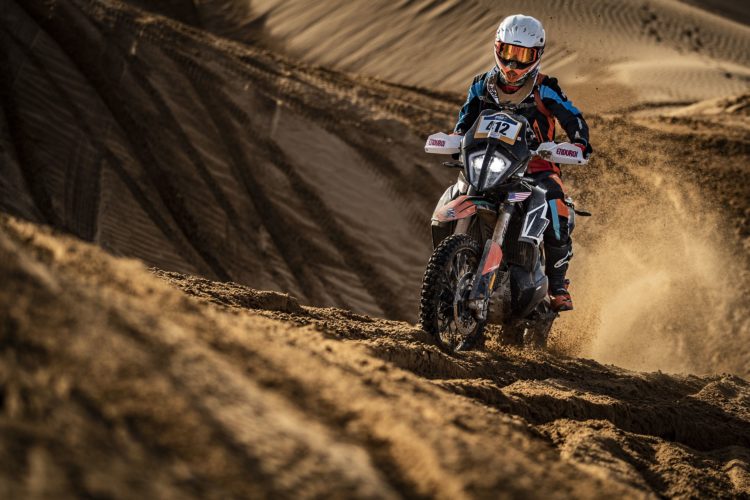 Jordan Huibregtse was the other American rider on the podium, in third place.

KTM bigwig Hubert Trunkenpolz said the Ultimate Race demonstrated what makes KTM adventure riders different: “the Ready to Race spirit is alive in our customers … the race was extremely tough on them and the KTM 790 Adventure R. These are normal people and not Factory riders, but they saw the opportunity for an incredible adventure and tackled it head on.” Errr, we’re pretty sure lots of other non-KTM riders would have been very happy to tackle the Ultimate Race on whatever bike was handy, but we’d have to agree with Trunkenpolz, this definitely wasn’t an easy event, so congratulations to all involved.