These days, Angelle Sampey is pretty well known in drag racing circles and in media. But this wasn’t always the case.

When she started drag racing motorcycles in 1996, all she wanted was to be treated by an equal. Having the notoriety of being a female racer was not on her agenda. Sampey wanted to be known as a strong competitor, one that others respected and did not want to lose to.

But unfortunately for Sampey, her competitors mostly saw her as a woman. They didn’t respect her abilities as much as fear being beaten by a “girl”. 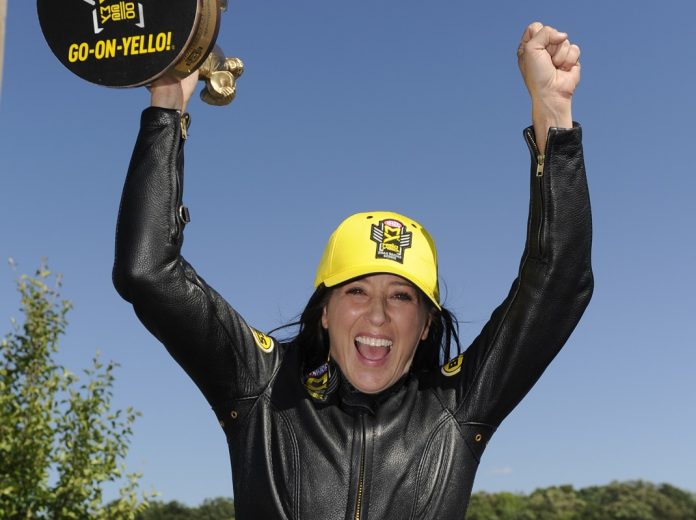 “I have two little girls looking up to me now, which is why the whole female role model thing has changed in my mind,” Sampey said. “I never wanted that role before, but I understand how important it is now that I’m a mother of two daughters.”

Now, she has a new challenge. Past competitor Andrew Hines has hired Sampey to race a Harley Davidson in NHRA’s elite Pro Stock Motorcycle division. Sampey and Hines have had a contemptuous relationship in the past. But years and Championships later, Hines wanted the female rider on his team. 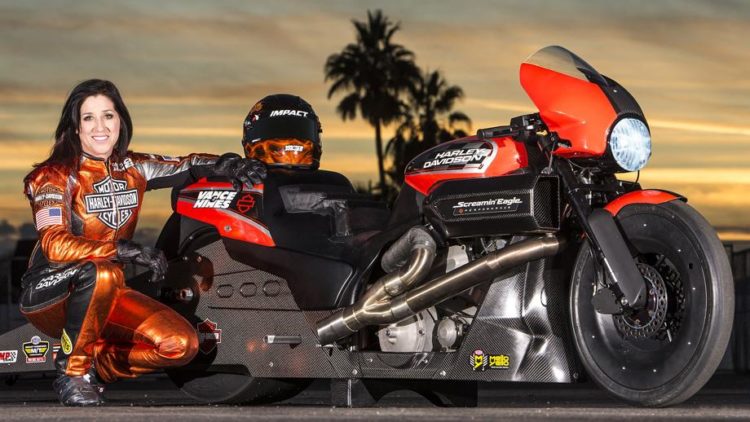 Sampey is coming to grips with her new ride. It’s quite different than her past steeds.  Sampey was used to fully faired race machines. The Harley is far from a fully faired bike.

This bike is so much different than anything I’ve ridden before; it’s not even close. It’s mostly due to the wind. This bike doesn’t have a fairing so you feel the wind. People used to ask me, ‘What’s it like to go almost 200-mph on a bike?’ and I’d tell them that I barley feel it because on the bikes I’ve ridden, you can’t feel it.

On the Harley, you can feel it. It feels like you’re going 300-mph. To be honest, I was a little intimidated by it at first and that’s not something I’d say often. I know it’s just a matter of getting acclimated but there is definitely an adjustment.”

And acclimated she has become. At an Orlando, Florida test, Sampey laid down a run of 6.79 seconds, barely three-hundredths of a second slower than Hines.

So at this point in her life, Sampey has grown accustomed to her status as a role model and a champion who can race with the best of them and win.