Ever heard of an assault bike? Technically speaking, it’s the name for a newfangled exercise bike that’s used to give you a full-body workout, in case the old-school exercise bikes weren’t getting the job done. If you’re out of shape, the assault bike will leave you feeling like you were … assaulted?

Flash back a few years, though, and Armstrong-CCM was making a different kind of assault bike. The MT500 was designed for soldiers to strap on a machine gun and go assault the enemies of Her Royal Majesty. 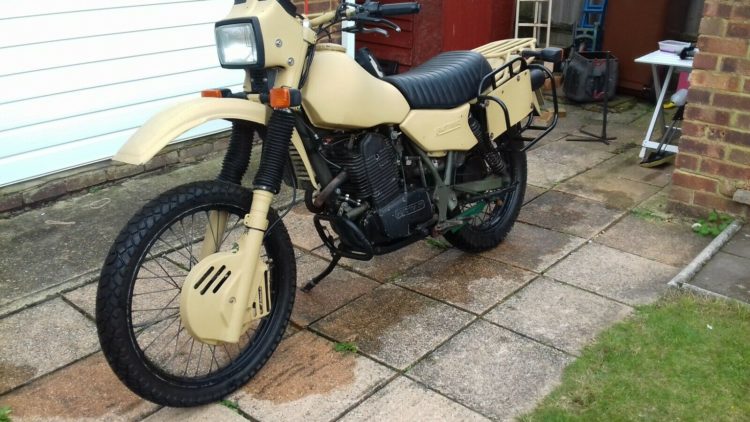 The bike originally came in olive drab. Maybe the army painted it this desert-friendly color? Or maybe it was a civilian owner. Photo: eBay

It’s actually surprising the MT500 isn’t more notorious, or more popular, because it’s a fascinating machine despite its drawbacks. Although it’s most famously associated with the British armed forces, it served and was even built in other countries. It wasn’t even designed in the UK, and used an Austrian engine.

The story goes that the MT500’s design actually originated with SWM, back in the early ’80s before the company closed its doors (SWM is back now, under Chinese ownership and building re-badged version of the made-in-Italy Husqvarnas). Armstrong-CCM acquired the XN Tornado design off SWM, adapted it, and started to build the MT500 for the UK’s military.

Right from the get-go, the MT500 was purpose-built for the army. “MT” stood for “Military Transport,” supposedly. The bike was missing some stuff you’d expect on a street-legal machine (pillion seat), and came with accessories you definitely wouldn’t expect on a bike for the consumer market. How many bikes on showroom floors are equipped with assault rifle cases and Jerry cans? If fuel range wasn’t an issue, you could substitute panniers for those Jerry cans, which bolted to the side of the gas tank.

That made-in-Austria single-cylinder Rotax is crude by today’s standards, but got the job done. Photo: eBay

The MT500 was powered by a made-in-Austria air-cooled 500 cc Rotax single. Rated for 32 hp and 28 lb-ft of torque, it wasn’t exactly a screaming demon of rip-your-face-off power, but it got the job done. By today’s standards, it was a buzzy engine, but that’s true of most thumpers of that era. It was kickstart-only, which reduced complexity—always important to the sensible folks in military procurement. After all, if a squaddie wasn’t fit enough to boot over his bike, he oughtn’t to be in the armed forces anyway, right?

The whole machine had a very Mad Max look to it. It wasn’t just the gun case and the Jerry cans—the spartan dash, the olive drab paint, the sheet metal chain guard all gave the bike a survivalist look, like something cobbled together in a world gone mad in a battle over gasoline.

The MT500 had dual rear shocks, something that was being phased out around this time period, but the British army wasn’t concerned with cutting edge offroad tech. At least there was a front disc brake.

A very crude set of gauges that gets the job done. Photo: eBay

Despite its iconic looks, you rarely hear or see war stories about the MT500, maybe because there were so few of them made (some reports say less than 500, although that seems awfully low). Rumor has it the SAS used them after being inserted by helicopter for desert missions. True? False? It’s fun to imagine it, anyway.

Although you don’t see many combat tales featuring the MT500, it did have a colorful history. After its debut in the UK in the mid-’80s, it was also adopted in small numbers by the Canadian and Jordanian militaries. And somehow, Harley-Davidson got its hands on the plans in the late ’80s.

It sounds absolutely mad now, but Harley-Davidson built a bunch of these machines, and they even carried the Harley-Davidson name. Harley-Davidson was hoping to pick up military contracts with the MT500, but it was the wrong move at the wrong time. NATO was eliminating gasoline-fueled vehicles from its fleets, and that ruled out the MT500 (it also spawned the idea for the diesel-powered KLR650, a terrible idea that consumed much page space in moto-mags of the early 2000s). So, Harley-Davidson canned the idea and stopped building the MT500 and the MT350, which it had developed from the MT500. 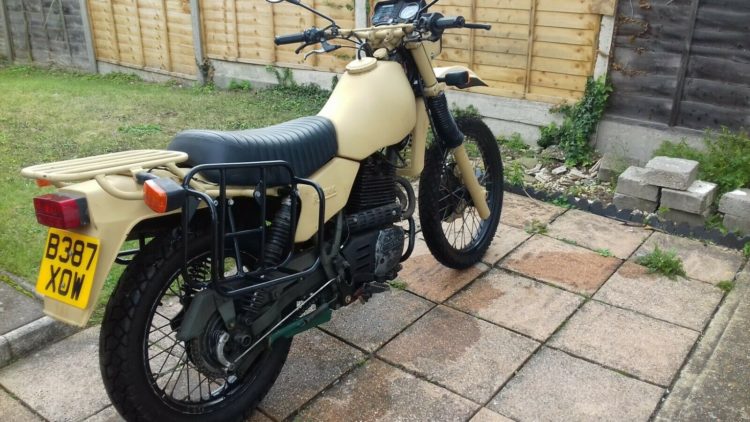 The original racks are there, but it appears the gun case and other boxes are missing. Photo: eBay

Talk to industry insiders who’ve been around a while, and they’ll swear they remember these things parked in the corner of Harley-Davidson dealerships in the late ’90s, but they didn’t last long. Harley-Davidson sold a few hundred of them and shut down production.

This bike for sale in the UK was built before the Harley-Davidson years, but has had some H-D parts grafted on. That’s the sort of creativity and resourcefulness needed to keep these bikes on the road. There are still spares available, but it’s not as if these machines were ever common to start with, and 35 years after production started, some bits haven’t been made for years. Thankfully, there are plenty of Internet resources that can help here.

It’s definitely not in its original configuration or paint, and is missing some army-issue bits. But hey, this way you won’t feel bad about giving it a vicious flogging, and at least the price isn’t terribly high. It’s not that hard to ship this bike to North America by air, or you could buy it and ride it all over the UK and the EU, attracting attention from both Mad Max re-enactors and retired British soldiers. What could go wrong?