My, my, my…  Not too long ago we let you know about Aston Martin’s planned motorcycle reveal at EICMA.  The bike was created and built in a partnership with Brough-Superior.  All we had at the time was a picture of Brough’s current machine… 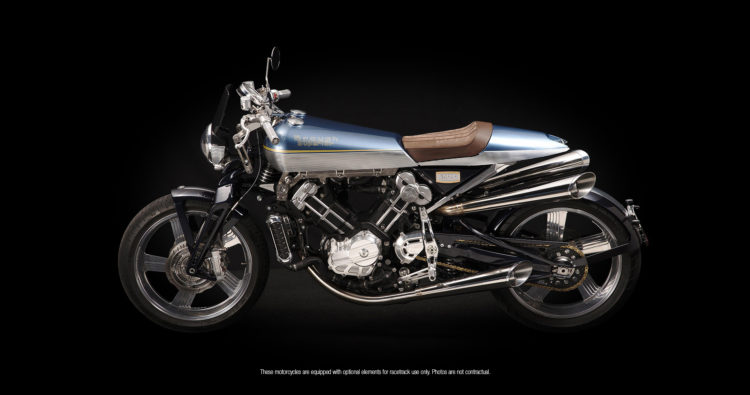 and a very simple silhouette outline of what the Aston Martin Brough Superior would look like.

The only clue we had about Aston Martin’s AMB 001 prior to its EICMA reveal.

The end result of the EICMA reveal is an impressively designed bike, and something almost completely different.  To put it succinctly, the bike is swoopy, powerful, exotic, and expensive.   I like three out of those four terms.  Such is life with Aston Martin.

The new bike is named the AMB 001 and there’s not much like it out there.  Of course, beauty is in the eye of the beholder, but this thing just sizzles for me.  It doesn’t look very practical but at the €108,000 ($119,000+) asking price, it’s probably more of a showpiece than a “get on it and ride it” bike.  If you’ve got and can spend that much money, you’re probably not planning on using it as a daily ride.  Production is limited to only 100 machines so that probably also adds to the price tag.

The Aston Martin AMB 001 can swoop in and take you and your wallet away.

Aston Martin says they have created a unique, modern, lightweight and powerful sports bike boasting exclusive technical features, including a chassis configuration with a double-wishbone front fork and structural carbon fiber body.  It is a beautiful machine, but that’s only part of the formula.  The AMB 001 is not short on power.

If that’s not enough power, the AMB 001 adds “Turbo Supercharging” and Aston says its an exclusive feature on a serial production motorcycle.  A variable geometry turbo boosts pressure through an intercooler for more efficiency.  Aston says its low inertia turbine avoids turbo lag that was an issue with motorcycles of the 1980s.  Because of this setup, Aston claims fast throttle response and high torque in a wide range of RPM. 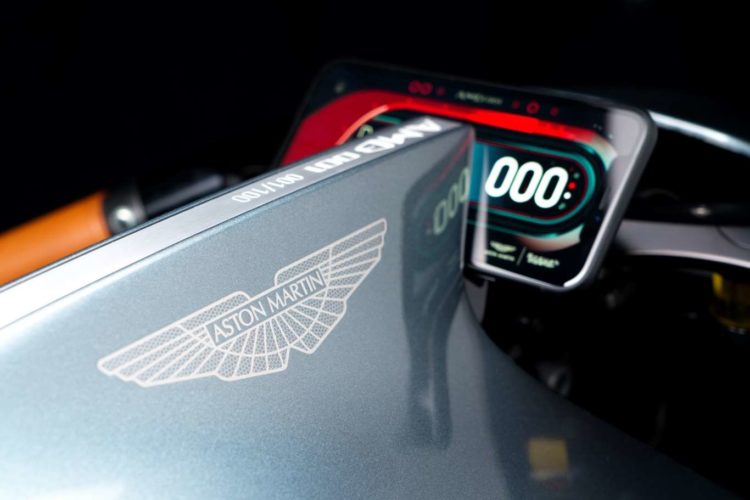 Changing gears is accomplished with a removable 6-speed gearbox, an APTC Clutch, and a final drive chain.

The AMB 001’s chassis is CNC machined from a solid billet.  It is bolted to the engine which is a fully load-bearing chassis component to combine lightness stiffness with a light weight.  A structural carbon fiber rear subframe and titanium interfaces complete the high-tech chassis.  Wheels are machined from aluminum forgings.

Aston says the brake system is developed by an unnamed racing brake specialist.  All components are machined from solid billet. 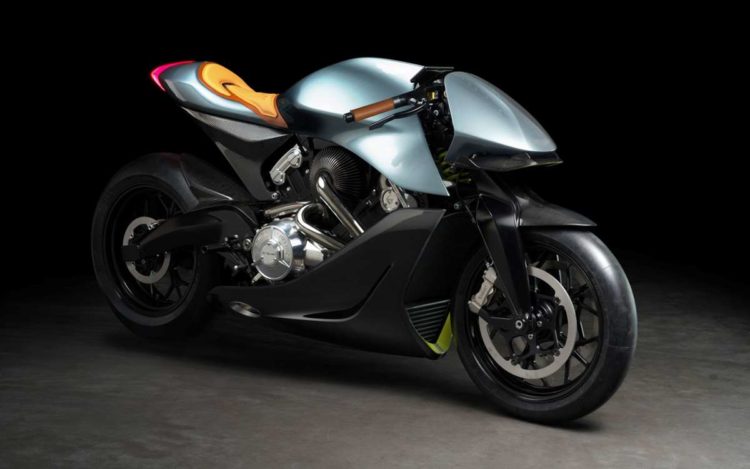 The double-wishbone Fior fork is machined from billet aluminum.  It disassociates the steering and braking functions, resulting in precise steering and stability that gives a more secure feeling.  With this setup, the motorcycle does not dive while braking and remains very stable while cornering.  The rear swingarm is CNC machined as well and includes a progressive damping system.

The bike’s body parts are all carbon fiber, even when not visible on the painted parts.  Some of the body parts are structural and provide strength with a weight reduction.

The leather seat is handcrafted equally the same as Aston’s luxury car interior.  High-quality leather and stitching match the handcrafted handlebars grips.  Derived from the AMR supercars, the Aston Martin Wings logos are made from thin laser-cut sheet metal and included in the paint’s lacquer layers.

The AMB 001 comes in the traditional Aston Martin Racing colors of Stirling Green and Lime Essence.  The wheels, forks and brake assemblies are Matte Black.   Aston claims that:

“…the AMB 001 features a sublime combination of paint and bare carbon fiber that accentuates the lines of this collectors’ item.  As befits the Aston Martin and Brough Superior brands, all of the components have been specially designed using the best processes and materials, including carbon fibre, titanium and billet aluminium.”

The bike boasts a strong, sculptural body form, beautifully accented by a carbon fibre fin – the design of which is derived from the side strake on Aston Martin cars – that runs along the full length of the Stirling Green tank, passing under the saddle and out onto the rear, creating a flowing form along the top of the bike.  As the fin passes under the saddle it can be seen through breaks in the Oxford Tan leather pads of the hand-stitched saddle, which combines old techniques and modern technology in one swooping area that is a perfect fit for the human form.

AMB 001 has been designed to display a level of elegance that isn’t normally found on racing bikes. Beauty and power is the order of the day for this track-only racer. Aerodynamic wings attached to the cowl on the front of the bike take their direction from the S-Curve on the front of an Aston Martin, providing Aerodynamic downforce.

Well, that’s a mouthful, but it is in keeping with descriptions befitting an Aston Martin and the people who can afford to buy them.

Would you own one?

Some may find that the  Aston Martin AMB 001 is an over-complicated and overpriced machine that can be bested by other machines currently in production for a lot less money.   While that may be true, it’s that point that may attract wealthy buyers.  Because if you hop on an AMB 001 and ride it down the street, chances are you’ll be the only one in a large area to own one.

Would I buy an AMB 001?  No, I wouldn’t.  I don’t have the money or inclination.  What I do have, however, is an appreciation for (in my opinion) an artfully designed and rare motorcycle.

What do you think?  If you had the money readily available, would you own one?  Let us know in the comments below.