Vermont resident Muriel Farrington really likes motorcycles.  She’s been riding them since she was 58 years old.  While that might not be unusual, it’s her current age and her continued riding that is quite remarkable.

Muriel is 78 years old and there’s little in the line of things that can stop her from riding her bike.  And, while on a to South Carolina, Muriel stopped in the town of Union and caught the attention of some local residents.

Chatting with residents, Muriel told them that she started riding when she was 58 years old.

I was dating a guy who rode and he kindled my interest. I should say rekindled since my uncle had owned one.” 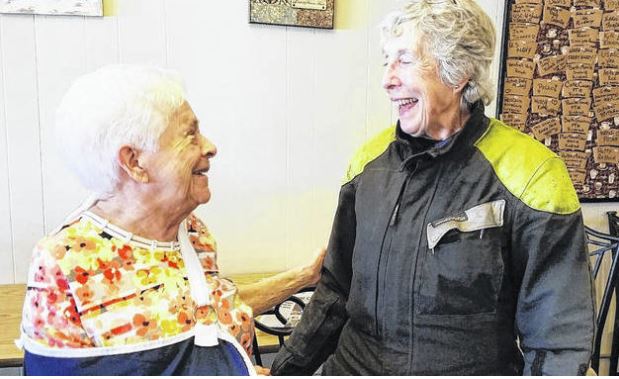 Which is better?  Men or motorcycles?

When asked which she preferred more, men or motorcycles she quipped:

Since then I’ve given up men for motorcycles,” she said with a chuckle. “It’s less hassle.”

Prior to her chat with Union, South Carolina residents, Muriel took the time to make a few stops that shows she loves her riding.

I rode from Vermont to Virginia for a rally, to Cape Hatteras, been in Shelbyville, been in Lake Lure, stayed in Shelby with a friend for a couple of nights.”

“I went to the BMW Motorcycle Owners [rally] of America in Greer. I went to my daughter’s in Bluffton, she and her husband just moved there from Ohio.”

Muriel owns two motorcycles.  A BMW F 700 GS which she rode to South Carolina as well as a BMW F 650 Twin.

Even more impressively, Ms. Farrington spent 9 years on the BMW Motorcycle Owners of America Board of Directors.   While she attended this year’s BMWOA Rally, she also plans to attend the 2020 BMW Owners Rally in Great Falls Montana next year as well.

Clearly, Muriel has a love of motorcycles and the people who ride them.  Congratulations Muriel and we look forward to seeing you on the road soon!