This article was kindly contributed by Janelle Kaz who originally published the article here.

The desert can seem an inhospitable place, a harsh environment that is indifferent to your watery biological existence. Make no mistake, it is. But it is also a place of scenic roads, incredible beauty, and fascinating flora and fauna. Only unique life thrives there, out in the elements—specialists of the dry.

The desert roads can be unrelenting and hypnotic. I would often catch myself in a trance, with the landscape and lines of the road unchanging, hypnotized by mysterious reflective objects sparkling in the distance. The large trucks have flat front ends, so in certain situations, with a truck barreling down the road in the opposite direction, the oncoming wind would smack into my torso, knocking me back with a surprising force. This corporeal reality check would bring my entranced state of mind to an end, albeit momentarily.

The Atacama is known to be the driest place on the planet. There are areas of this desert where rain has never been recorded. We now know that the super-dry state of this desert is ancient, making it the oldest on the planet. Scientists have dated the loose surface sediment which would have been destroyed or washed away by any rainfall or running water at a minimum of 20 million years old. This is done using a technique to measure changes in the sediment caused by exposure to cosmic rays, high-energy particles bombarding Earth from space. 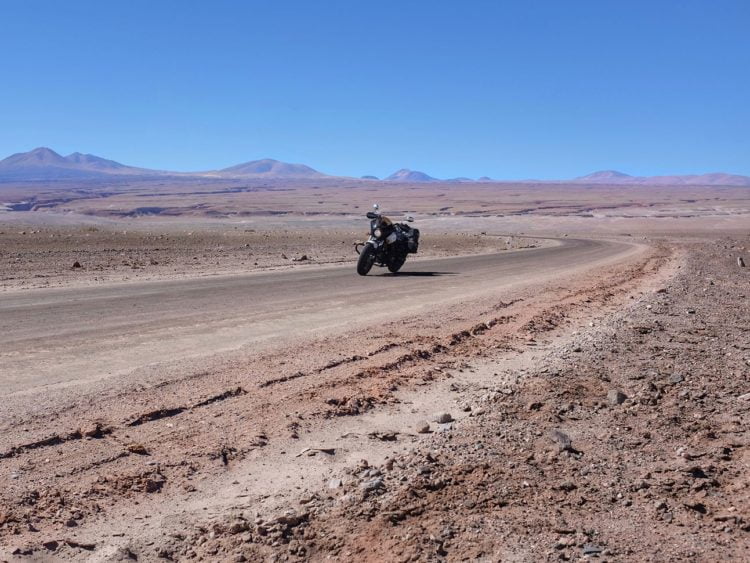 It is hard to grasp just how ancient the surface of the Earth is the areas of the Atacama where rain has never been recorded. -Janelle Kaz

A gem in this rugged desert is San Pedro de Atacama, a dirt-road town that exists as a bit of an oasis, offering the full gamut of accommodation, restaurants, and tours. Descending into San Pedro, the smooth pavement winds through the Valley of the Moon, a visually intriguing landscape that sets the stage for this otherworldly location. The land formations feel like those not of our planet. Strange, dinosaur-like, diamond-plated backs crest the surface of the earth, turned into stone, whittled into sharp spades by the wind. 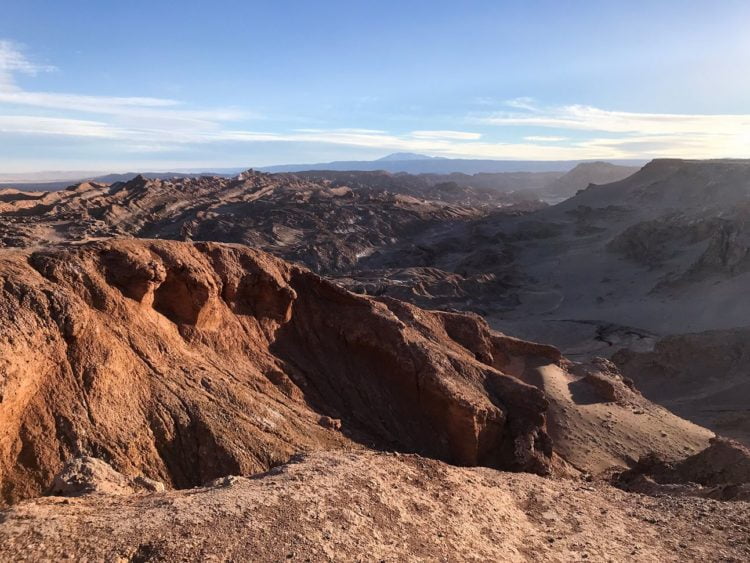 A view of the Valley of the Moon from one of the lookout points near the top of the road. -Janelle Kaz

The roads of the town are dusty and rutted, some deep with silty dirt. I’ve been chased by packs of dogs plenty, but the welcome party I encountered here repeatedly bit my ankle. Beware.

One of the main streets of San Pedro de Atacama. -Janelle Kaz

If you’re needing some nourishment upon your arrival, I highly suggest an empanada at Emporio Andino. It offered the best empanada I’ve had in Chile and the restaurant is located right inside the entrance of the town. There is one lonely gas station in all of San Pedro de Atacama (the next closest one is in Calama), which is a bit tricky to find—worn wooden signs lead the way. 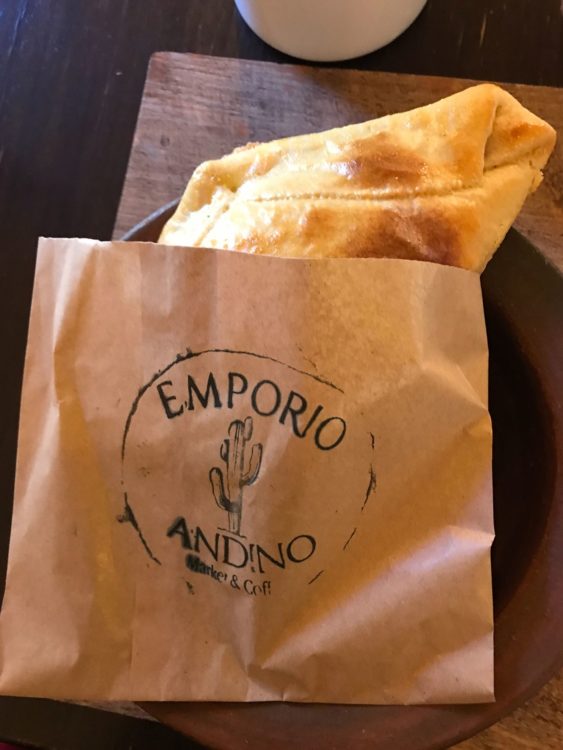 The empanadas at Emporio Andino are a wonderful food item to bring along on your two-wheeled excursions out into the desert, along with copious amounts of water. -Janelle Kaz

My goal in the Atacama was to see the wild flamingos. They flock to the high-altitude (2,410 to 4,270 meters or 7,907 to 14,009 feet) salty lagoons to feed, mate, and reproduce. To observe this, I headed to Laguna Chaxa (pronounced Chak-sa), a still lake with mirrored reflections within the salt flats, known as the Salar de Atacama.

The main road toward Laguna Chaxa is paved, and you’ll even pass the legendary ALMA observatory (the Atacama Large Millimeter Array, “alma” also means “soul” in Spanish), which consists of 66 huge antennas, simulating a telescope 16 kilometers (9.9 miles) in diameter. More powerful than the Hubble telescope, ALMA searches the most distant galaxies, observes the beginning stages of planet formation, and recently participated in the Event Horizon Telescope project, which produced the first direct image of a black hole.

Once you veer off the main road toward Laguna Chaxa, road quality becomes a very different story. In the northern part of Chile, the back roads are made of compact earth and salt, which works well due to the shortage of rain. When I visited, they were improving a large portion of the loose dirt and salt road, which they were wetting down, turning it into a slurry that was quite difficult to ride. However, Laguna Chaxa, a world of calm and colors, was worth it. 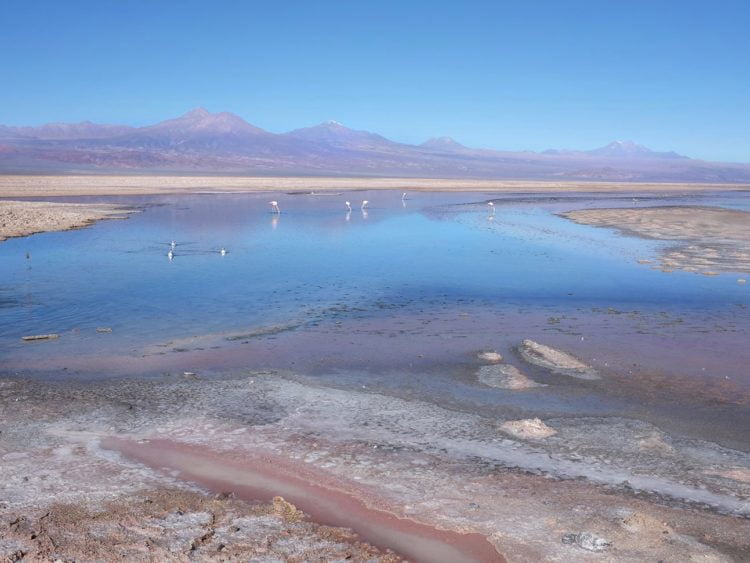 Wild flamingos in the serenity of the very salty Laguna Chaxa. -Janelle Kaz

There are a number of volcanic peaks dotting the horizon, snowcapped and pale pink, showing the way to the Andean Plateau, the Altiplano. The lagoon is home to brine shrimp, tiny organisms who thrive in the salty water and are food for the three species of flamingos that come to visit throughout the year. This lake is protected as part of the Los Flamencos National Reserve. Even within the extreme conditions of the salt flats known as Salar de Atacama, a wide variety of wildlife persists, including the Chilean, James’s, and Andean flamingos. 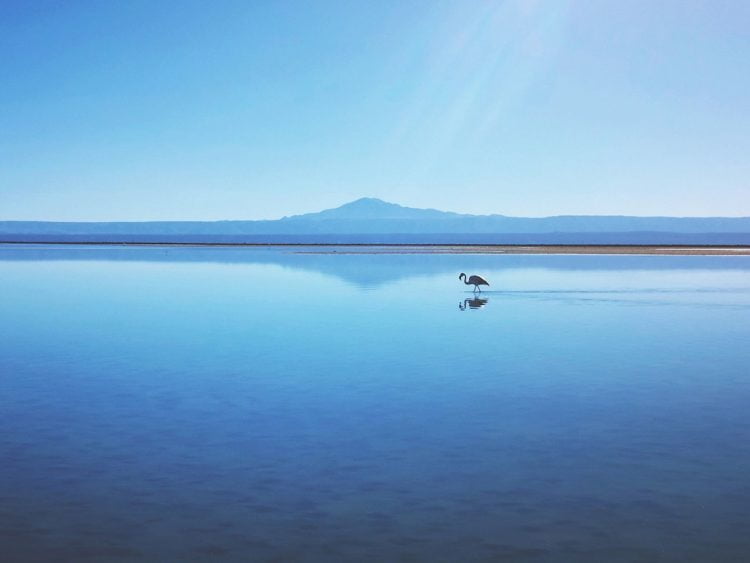 The extreme salinity of the lagoons protect the flamingos and their chicks from predators. -Janelle Kaz

Additionally throughout the Los Flamencos reserve, it is possible to see Andean foxes, the southern viscacha (a rabbit-like cousin of the chinchilla), the vicuña (wild ancestor of the alpaca), and Darwin’s rhea (looks like a small ostrich). Most of the roads to explore this reserve will be dirt, with varying degrees of smoothness.

These harsh lands have been inhabited by the indigenous people known as the Atacameños for more than 12,000 years. Parts of the Los Flamencos National Reserve, such as this lagoon, are co-managed as an initiative to acknowledge the ancient rights of the Atacameñan culture to the use and conservation of their lands. The Atacameños are directly involved in regulation, protection, and visitor control and thus benefit from incomes generated by entrance fees in return.

The man working at the entrance booth upon my arrival had a spiel (in Spanish) that was so well memorized, a monologue of information for the multitude of frequent questions he must have received thousands of times over the years, again and again. He did know a few words of English which he threw in every now and then, such as the word “water,” telling me to drink plenty since the strong sun combined with the high salt quantity of the earth dehydrates you faster; “nest,” referring to the mud-caked pillars the flamingos build to keep their eggs and hatched offspring out of the salty lagoon; and most entertainingly, “sea monkeys,” referring to the brine shrimp themselves.

The notion that these tiny aquatic crustaceans were ever deemed “sea monkeys” and then marketed to children as pets had completely escaped my memory. The fact that this Atacameño man had learned this term and revived such a bizarre name for these salty-loving flamingo snacks within my own memory makes me smile every time I think about it.

Sometimes out on the road, it is the small experiences like these that stick with you and brighten your experience, however sunbaked, dehydrated, and desert-entranced you may be.

Brine shrimp are one of the flamingos many prey items which contain the red carotenoid pigments that give them their signature pink hue. They metabolize and dissolve the pink pigment into their fats, which is then deposited in their feathers and skin as they grow.

Flamingos are tougher than you think. Well adapted to this harsh environment and with resilient skin on their face and legs, they are capable of drinking water at near boiling point from thermal springs and geysers. If no fresh water is available, flamingos can drink from the saline lagoons, using special glands in their head to remove salt, draining it out from their nasal cavity. 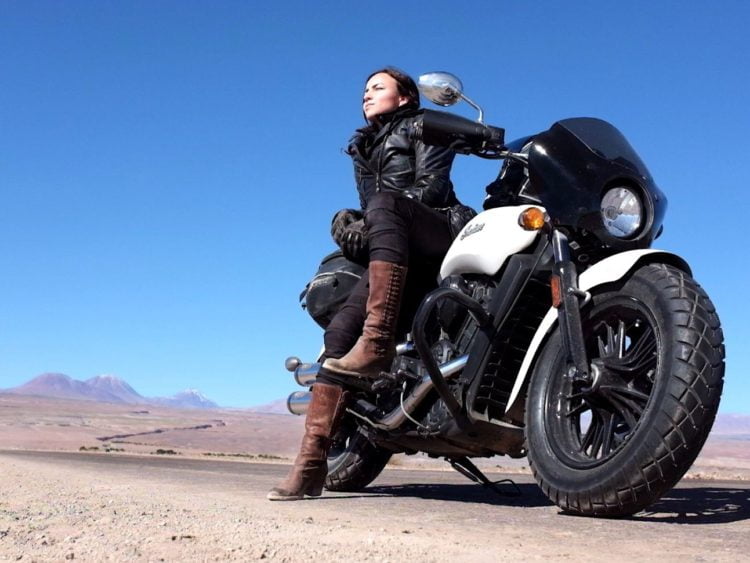 Author with her Indian Scout Sixty in the Salar de Atacama of the Los Flamencos National Reserve. -Janelle Kaz

Flamingos are strange and wonderful, but there are a handful of other birds to see here, such as the Andean avocet with its elegantly curved bill. There are more roads to explore on your way back into the town of San Pedro de Atacama, and unless you want to navigate those dirt roads in the dark, the ideal place to catch the sunset comfortably is within the town itself. 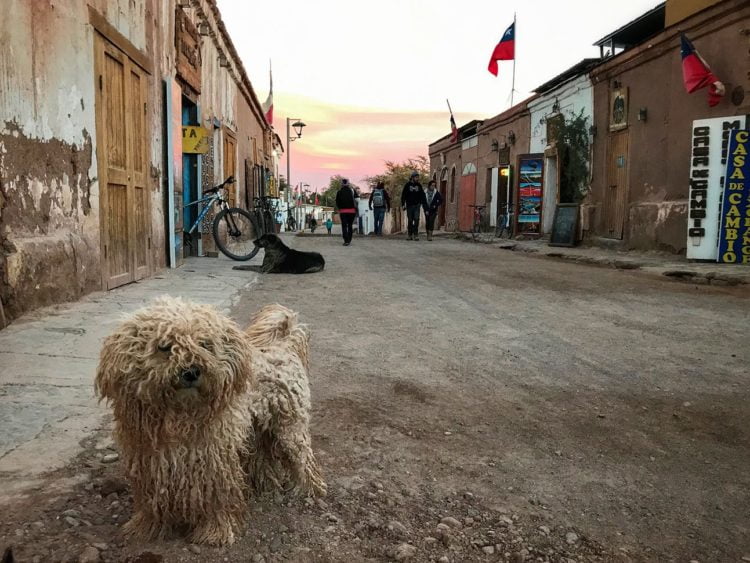 The mecca that is known as Tierra Atacama has incredible views of the volcanoes as they turn fiery magenta and purple with the setting sun, before the cooler blue tones of the desert take over. I couldn’t afford their accommodations, but the top-notch restaurant and bar is all panoramic windows, which I highly recommend as your destination as the darkness envelops the desert. 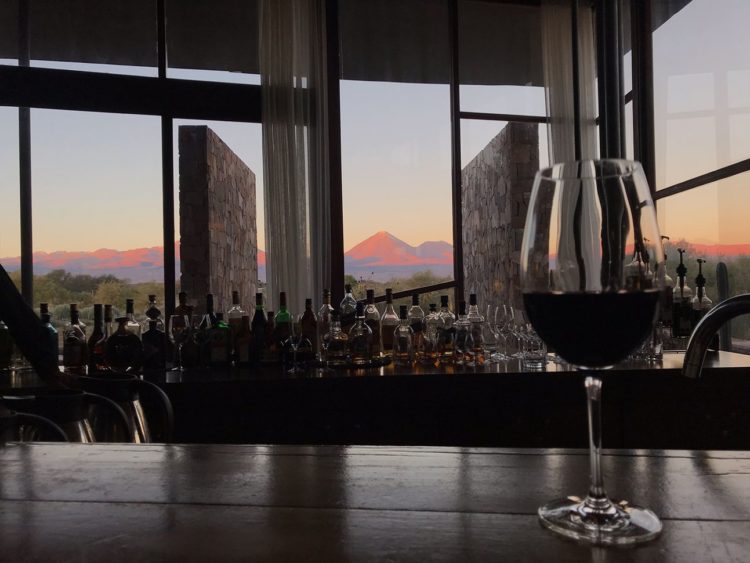 View from the lodge at Tierra Atacama Hotel. -Janelle Kaz 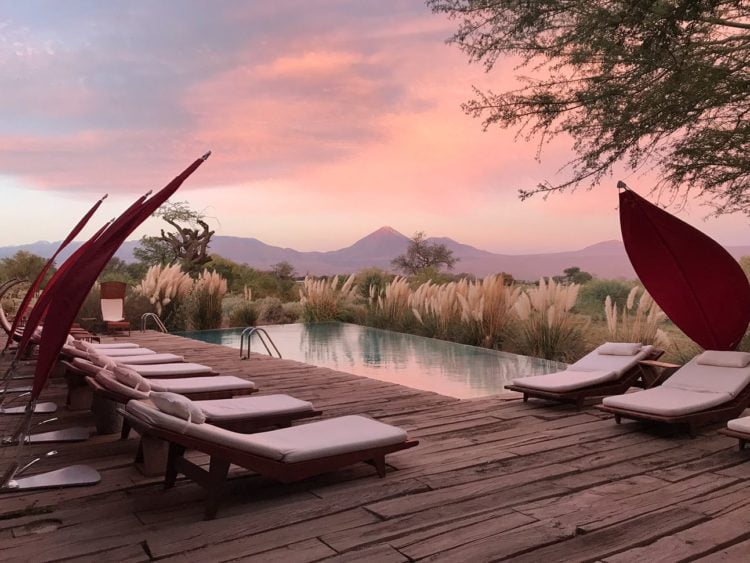 It is hard to believe this setting is real, especially after feeling like a complete dirtbag out in the harsh environment of the Salar de Atacama. -Janelle Kaz

Pisco sours are a staple in Chile and Peru, but here in the desert, they make one infused with a local medicinal plant known as “rica rica.” There is a hearty traditional healing plant and it gives a very herbal, sage-like flavor.

Once darkness descends, the crystal-clear, starry sky of the Atacama illuminates a new perspective on the desert and, perhaps, the universe. Stargazing in the Atacama is unparalleled, the Milky Way galaxy is a vivid swath of light in a cloudless, desert night. You too can ask your heart’s content of questions to an astrophysicist with five telescopes, leading trilingual (Spanish, Portuguese, and English) tours for a company called ExoPlanet. There are stars visible in the Southern Hemisphere to enjoy, or you could focus in on Jupiter and observe its largest, four Galilean moons as we did. 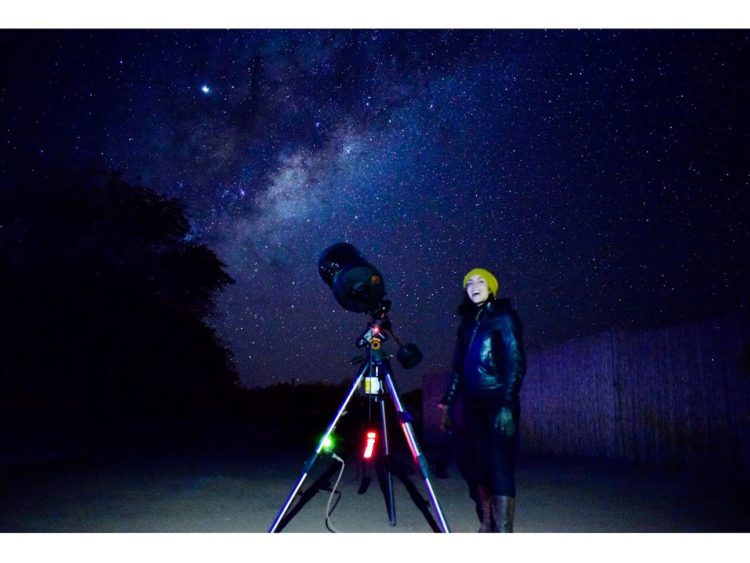 Next time I would definitely try to finagle my motorcycle into the photo. The brightest point you see the telescope pointed at is Jupiter. -Janelle Kaz

Be aware of wind conditions if you’re planning to ride this area, as sometimes the roads can be closed due to severe wind gusts and sandstorms. Occasionally an arrival or departure can be delayed due to these hazardous circumstances. 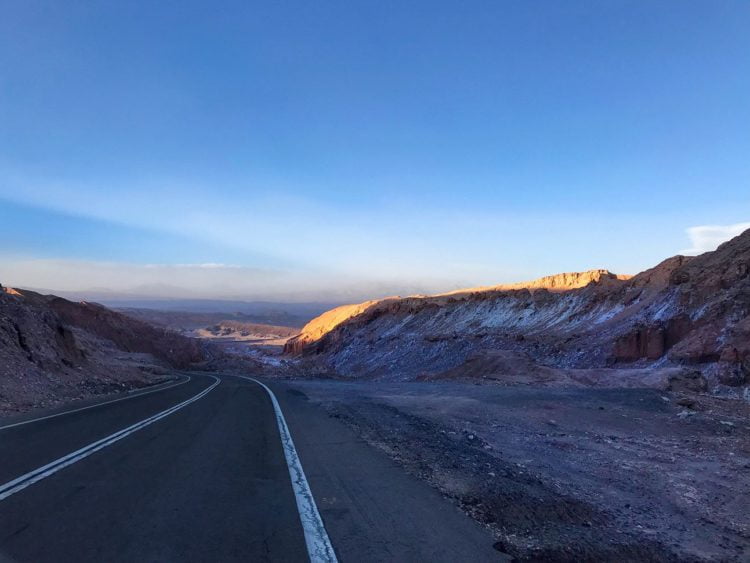 The curving pavement through the lunar landscape of the Valley of the Moon. -Janelle Kaz

Unless you’re heading to Argentina next, you’ll travel out of San Pedro de Atacama northwest toward Calama, ascending sweeping pavement through the Valley of the Moon and stepping back into a world that feels a little more Earthly.