Yes, it’s potentially the world’s most dangerous continent. But probably not for motorcyclists.

In Australian Aboriginal usage, the equivalent of ‘cool’ or ‘hot’ for good or attractive is ‘deadly’. Does that tell you something about the place? Maybe it does, at least as far as Aboriginal people are concerned. Take the kind of hunting common in the Furneaux Islands in Bass Strait known as ‘birding’. It simply requires you to put your hand and arm down into the hole made in the sand by a mutton bird and pull the bird out. The problem is that sometimes, the burrow has been taken over by a tiger snake. 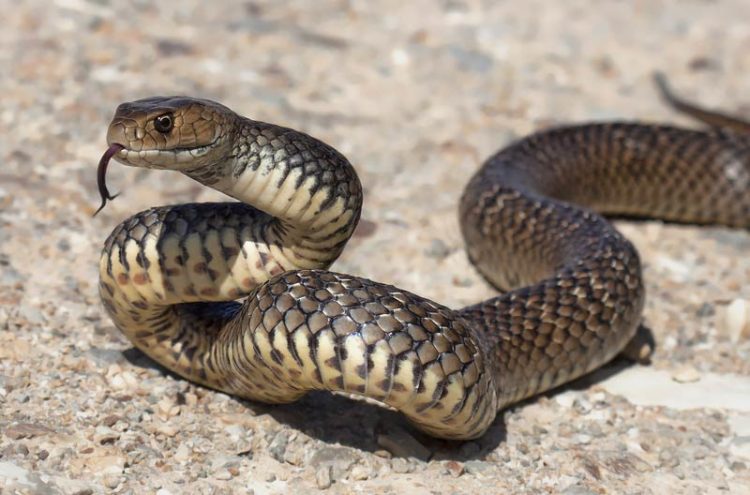 An Eastern Brown Snake. Leave it alone, and it will leave you alone.

“You put your hand down a burrow and if, when you get your arm down the end of it, it’s cold, you pull your arm out quick, because it’s clearly not a mutton bird,” according to local Michael Mansell. And if you leave your hand down there a fraction of a second too long, you will have done your last hunt unless some monovalent tiger snake antivene is close by. Deadly!

But seeing you’re not Aboriginal (unless you are) you’re unlikely to be out there birding on Tin Kettle Island. And that’s the key hint to just how dangerous Australia is for locals or visitors – not very.

Surprised? Take the case of the small-scaled or fierce snake which lives in Central Australia. It has the most powerful venom of any Australian snake, and in fact of any land animal except, possibly, the Brazilian Wandering Spider. But like its almost-as-venomous buddy, the Inland Taipan (which can kill you in 45 minutes), no-one has ever been killed by it. Presumably that means that no-one has been bitten by it. Unless they were never found, of course. 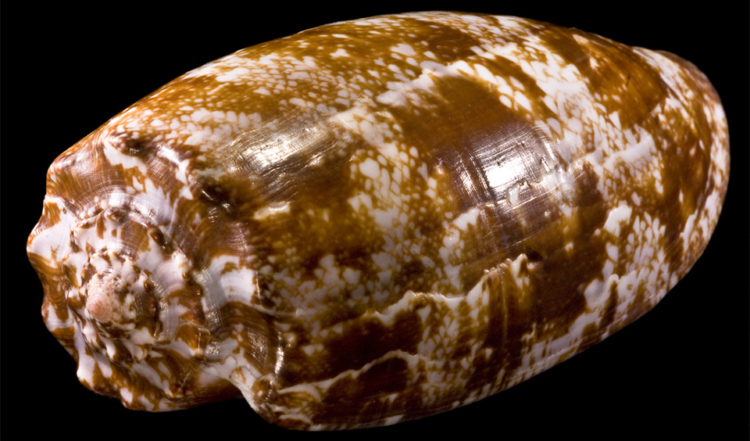 Pretty, right? But don’t be tempted to add it to your collection.

Or consider the marbled cone snail. Its pretty shell makes it a natural target for shell collectors, but if you get a solid dose of its venom you will go blind and then die. No ifs or buts; there is no antivene. The ocean is actually a good, if I may use the word, source of deadly critters. The rule here is: don’t step on a stonefish, don’t pick up a blue-ringed octopus and swim only on patrolled beaches. These usually have either a shark net or some kind of shark watch. That takes care of one predator. As well, pay attention to box jellyfish warnings. Widely regarded as the world’s most venomous creatures, these things are nearly invisible and have tentacles that can reach for more than two metres. Their sting has been described as “unbelievably painful”. But don’t worry too much about that, because it won’t last long; the touch can kill you in minutes. 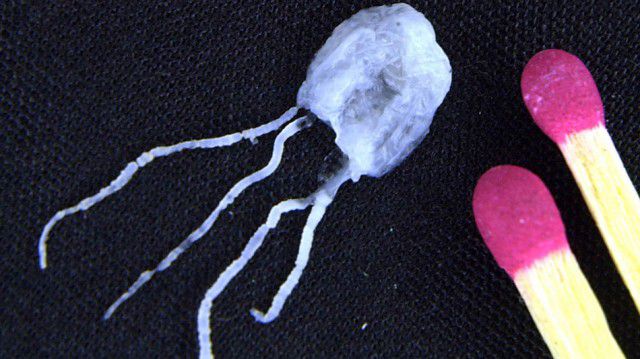 Yes, Irukanji are tiny. That’s no help if the metre-long tentacle gets you.

Irukanji jellyfish, which are tiny versions of box jellyfish, take a bit longer to kill you and are not as easy to spot.

I live in Sydney, all of ten kilometres from the centre of this city of four million people. My land backs onto a creek and a small bushland park, and until recently a large (call it a couple of metres) brown snake lived in a stormwater drain behind my neighbour’s property. Brown snakes are responsible for most snake bite fatalities in Australia. We called the wildlife people about it, and they told us to just leave it alone.

“It lives there. The pipe is its home. Stay away and keep your kids away.” Ah well. At least it kept the rats down. 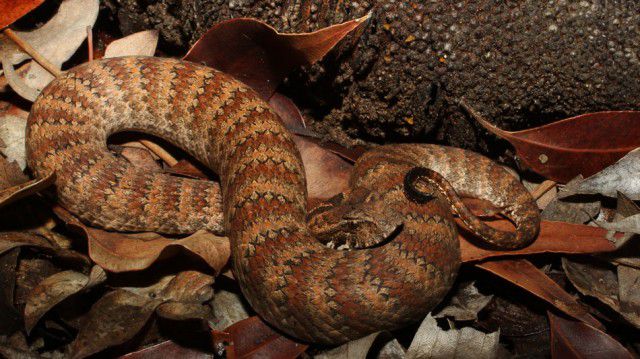 Hard to see, isn’t it? That’s what the common death adder relies on.

There are several other venomous snakes, but the only snake that is a major threat even to someone who is being careful is the common death adder, which is also common around Sydney. While other snakes tend to bugger off when they hear or feel you coming, this snake relies on its camouflage instead. That means there’s a chance you’ll step on one if you’re walking in the bush. They have long fangs.

There are a couple of Australian spiders whose bite can be fatal. The Sydney funnel web is native to the part of Sydney where I live, but I’ve never seen one although I have seen its burrows. The redback spider lives in sheltered spaces, and you are well advised to look under toilet seats if you’re using an old outdoor ‘dunny’. A family of redbacks was using the space behind the bumper bar of my mother’s car as a home, much to the surprise of the mechanic who was working on it. 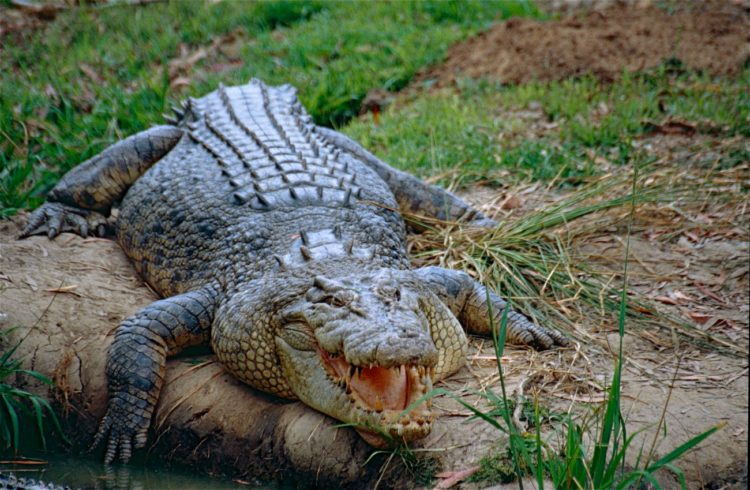 Saltwater crocs, or ‘salties’, really are dangerous. And terrifying.

That leaves us with a couple of larger threats. Buffalo, common in the Northern Territory, are only really likely to be a danger to motorcyclists if you hit one – the same as other stock. The main problem, as a friend of mine from Batchelor in the NT told me, is that “they’re road-coloured”. Keep your eyes open, especially at dawn or dusk – when you shouldn’t be on the road anyway.

That’s also when kangaroos are a serious threat. They get around in packs, or ‘mobs’, and the accepted wisdom is that you may see a few by the side of the road, but you “don’t see the one that gets you”. Wombats are solid chunks of muscle and hitting one is like encountering a sack full of bricks. They’re also creatures of lower light. Emus may be out at any time of the day, and are notorious for doing 90 degree turns and ending up in front of your bike. Another big and dangerous bird that seldom gets much press is the cassowary; stay away if you see one. 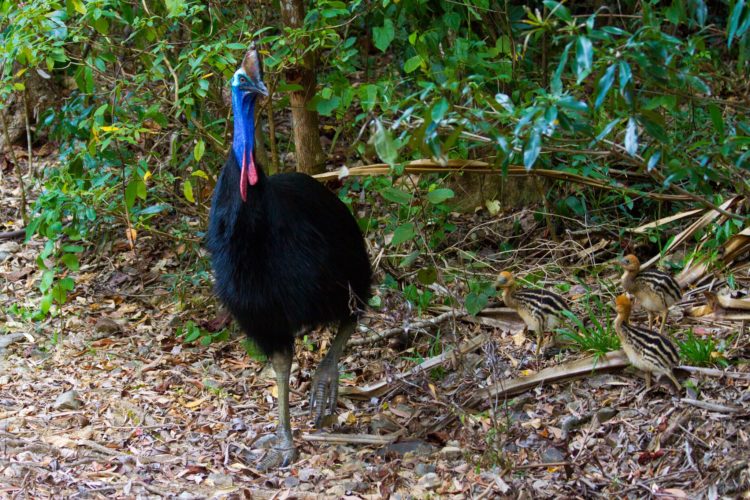 Estuarine or saltwater crocodiles are a genuine worry anywhere close to the sea in northern Australia. And that doesn’t have to be very close, either. Remember that unless you’re Usain Bolt, they can run faster than you. Take the advice of locals, watch for warning signs and don’t camp near water.

Does that all sound a bit daunting? It shouldn’t be. Martyn Robinson, a naturalist at the Australian Museum, thinks that “the most dangerous thing you can do [in Australia] is probably just crossing the road,” and that’s just as much of a problem in other countries. Too right, mate. See you soon?

Read all about it
Some adventure travel books

Why We Need Adventure Motorcycling

Green Spain
What’s an adventure? One thing to you, another to me