Sometimes you come across a story that must be re-told.  I recently found one of those stories online at a site called Blue Ridge Muse.  There, the story of Ms. Ethel McPeak Thompson Bolt was told by her son Doug on Mother’s Day as a tribute to his late mother.

The story begins in Norfolk, Virginia, during World War II.  Ethel had moved there after high school and was working in the gas stamp office, handing out gas rationing stamps.  Interestingly, her mode of transportation was a Harley-Davidson motorcycle.

One day a tall, lean sailor with coal-black hair came into the office to ask for extra gas stamps.  He said that he needed the fuel to ride his Harley to Florida to visit with his parents while he waited for reassignment to a new ship.

Ethel later said that she decided to give the sailor the extra gas stamps just because he was riding a Harley.  And that she never expected to see the sailor again.  But two weeks later, Ethel did indeed run into him again.

It happened when she was at a local bar with her boyfriend.  Her boyfriend was none other than a man named  Joe Weatherly.  The same Joe Weatherly who would later become an A.M.A. Hall of Fame member and NASCAR racer.

The tall sailor who had introduced himself as Tommy Thompson had just returned from his stint Florida.  He asked Ethel if he could take her out to dinner to thank her for the extra gas stamps.  Ethel told him that she would need permission from her boyfriend Joe Weatherly before she would accept his invitation.

Ultimately, Thompson challenged Weatherly to a motorcycle race through the streets of Norfolk.  If the Thompson won, he would get the dinner date.  Ethel was sure that this would be the last she would see of Thompson since Joe Weatherly was already an accomplished and champion motorcycle racer.

But not too long after the race began, Thompson returned to the bar without Weatherly.  Thompson told Ethel that he had beaten Weatherly and that Weatherly had gone home mad.  Ethel kept in touch with Weatherly but never dated him again.

Now with Tommy Thompson as her new boyfriend, the two went on rides with each other and with other sailors and their companions.  The rides turned into a blossoming love story. 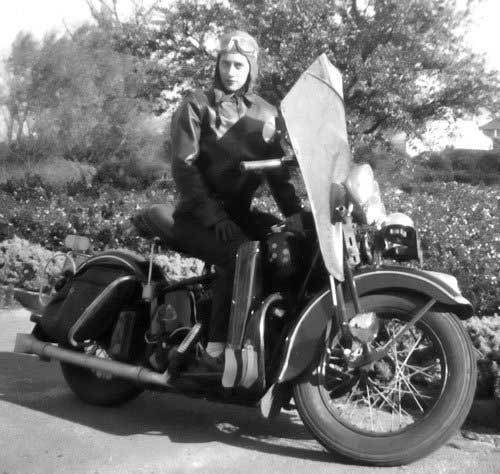 Ethel aboard her Harley-Davidson just before she headed south to Florida.

But World War II was still raging, and Thompson was told to report to San Franciso for assignment as an Electrician’s Mate First Class on the U.S.S. Missouri, a battleship built to help win the war.

Thompson duly reported to the Missouri.  Ethel worried about him greatly.  She had friends who had lost loved ones aboard ships in the Pacific.  But one day, the news came that the Japanese had formally surrendered on the U.S.S. Missouri and that Tommy was there at the signing.  He would soon be home.

Once home, Tommy proposed to Ethel, and she accepted.  They quickly married and made plans to move to Florida.  Her parents did not know anything about her love for Tommy or motorcycles for that matter.  Ethel decided that she would need to talk to them to calm them down before heading south.

So she told Tommy to ride to Florida alone, and she would meet him there.  Tommy worried about Ethel riding south alone, told her to take the train.  But Tommy apparently didn’t know his new wife well enough to know that a long motorcycle ride like that would just be an adventure for Ethel.

She later called Tommy and told him that she would arrive on the train at 3:30 PM three days from the call.  Ethel then packed up her bike and headed south.  She was prepared and packed a carburetor rebuild kit, two sets of spark plugs, a file for the points, and two tire patch kits.

Before stopping for the night in Georgia, Ethel did get a flat which she fixed.  The following morning, she walked across the street from the motel to a nearby diner and had breakfast.  After breakfast, she whipped out her machine’s carburetor and rebuilt it on the table.

Ethel then returned to the hotel and installed the rebuilt carburetor.  While she was at it, she installed a new set of points and plugs and continued her journey south.

When Tommy arrived at the train station at the appointed time, Ethel was sitting on her Harley waiting for him.  Ethel later said, “He tried to act mad, but he wasn’t.”

The new couple settled in Gibtown, Florida, which also serves as the winter home of many carnival workers.  Tommy went to work as an electrician at a local phosphorus plant.  On their days off, they rode their bikes, sometimes even in thrill shows.

Eleven months later, their son was born, and nine months after that, Tommy was killed in an industrial accident.  Another worker had turned on the power to an electric motor before Tommy had finished working on it. 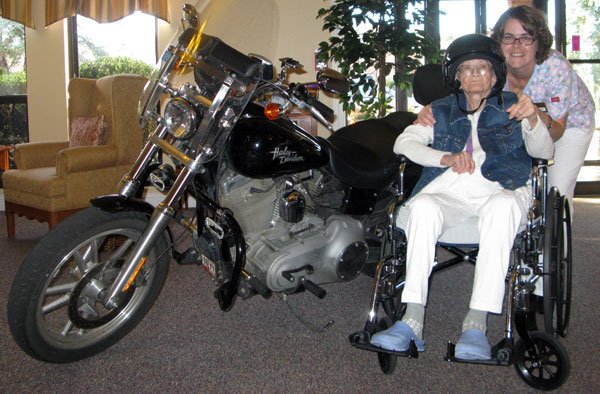 Ethel in 2012 shortly before her passing.

A few years later, Ethel and her son returned to Virginia.  There, Ethel met and married Truman Bolt.  They lived happily together until Truman’s passing.  Now that Ethel was alone, her wanderlust reignited.  She went to Australia, took cruises, and traveled throughout the U.S.

Eventually, Ethel’s health began to decline, and she moved into an assisted living facility.  In early August 2012, her son decided to bring his Harley there and take pictures with his mom and many of the facility’s residents.  Not too long after that, Ethel McPeak Thompson Bolt passed away.

But Ethel never let the fact that she was a woman get in the way of riding and her wanderlust.  She raised a family and enjoyed all that life has to offer.  And she did it with gusto.  Rest in peace, Ethel, or perhaps we should say, enjoy your heavenly ride?