Benelli is bringing its TRK 502X adventure bike to the US this spring.  The Italian designed machine has met with a significant following in Europe and will now be distributed in the US.

Benelli has a pretty rich history.  Back in 1911, six Benelli Brothers repaired and manufactured motorcycle parts.  Then in 1919, Benelli produced its first motorcycle engine and in 1921, its first complete motorcycle.

Over several decades, Benelli began racing and won races.  The small brand soldiered on until 1995 when Benelli was purchased by the Merloni Group.  The new owners tried some aggressive new ideas and came up with the Tornado 900cc triple and the TNT 1130 sportbike.  These machines were radical for their time but never gained a strong following or significant sales.

The Benelli TRK 502X adventure bike will be available in the US in the spring.  Pannier racks and a rear rack are included in its base price.

Now, the Qianjiang Group now owns Benelli and they think they can make their mark in the US.  Most of the bikes will be produced in China, but a small number of the machines will still be produced in Italy to use as quality control models.

Benelli TRK 502X coming to the US

Benelli already brings multiple models into the US, but this spring will mark the beginning of sales of Benelli’s adventure bike, the TRK 502X in the US. 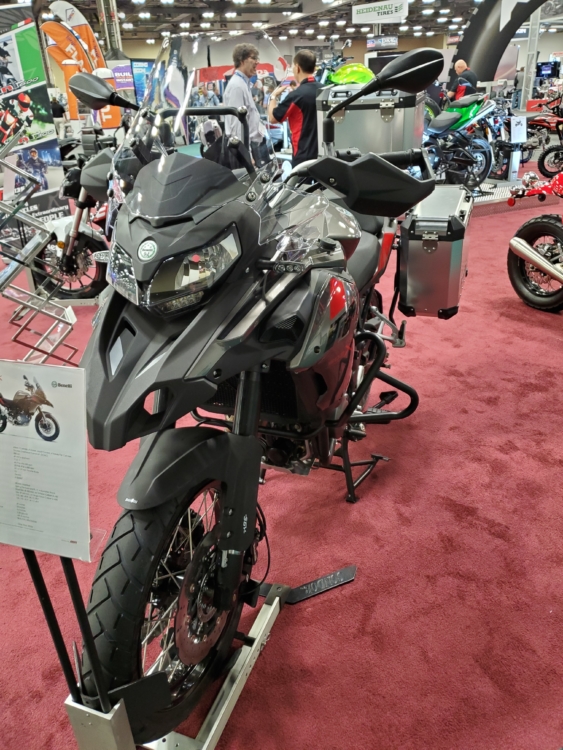 The Benelli TRK 502X has the now almost standard “beak” at the front.

Equipped with a 499cc eight-valve parallel-twin engine and dual overhead cams, the bike reportedly makes 47 HP at 8,500 RPM.  33 lb-ft of that torque is claimed to be available at 5,000 RPM.

The TRK 502X’s suspension consists of a 50mm upside-down non-adjustable front fork.  At the rear, a swingarm-mounted monoshock is adjustable compression and rebound and its spring for preload.

Both the front and rear wheels are aluminum spoked units.  At the front is a 19″ unit while at the rear, a 17″ unit handles the duties.

A combination of analog and digital gauges make up the bike’s display.

A 33.4 seat height is in the lower middle of the ADV segment.  It should allow many riders to get both feet to the ground.  While its seat height is fairly low, Benelli says the TRK 502X still retains a minimum of 8.6″ of ground clearance.

Because of the bike’s budget price point, there are no electronic rider aids, riding modes or ride by wire systems.  Depending on your viewpoint, that’s a plus or a minus.  You’ll have to make up your mind about that issue.

Pannier racks and a rear rack are included. The cases are not.

Pannier racks, a rear rack, and a small bash plate are standard.  But weighing in at 470 pounds dry, the TRK 502X is not a lightweight machine.  Add the weight of a full tank of fuel and engine fluids, you are somewhere in the region of 510 pounds.

Benelli is still determining the US retail price.  Right now, the machine is available in the UK for a suggested retail price of £5,299 or about $6,500.  Depending on final US pricing, the Benelli TRK 502X could be an affordable option for adventure touring.