You may have heard the news recently that the Piano Man, Billy Joel, had his house burglarized recently.  And there’s something strange about this particular burglary.  Although the burglar broke into Joel’s house, the thief didn’t steal anything.  All the burglar did was vandalize Joel’s home office and 12 of his motorcycles.

Why would anyone go through the trouble of breaking into Joel’s house and take nothing?  Just to vandalize Joel’s bikes?  That seems like a big step doesn’t it?

Perhaps not.  Perhaps this was the burglar’s way of getting back at Joel for some perceived slight.  To make him pay by the loss of something he loves? Hmm.

What if it were you?

But this crime did get me thinking.  What would I do if someone broke into where I store our bikes (in case our barn) and stole our motorcycles?  Or, perhaps even worse, vandalize them and leave their dripping mangled corpses for me to find. 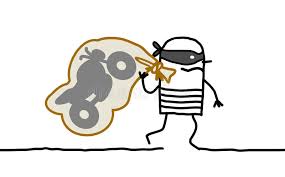 How would the vandalization or theft of your bike affect you?

I’m sure I’d be really, really angry.  I’d also feel violated that someone actually had the nerve to break into my property.  Next, I’d call the cops, but the reality of the situation is that they would likely never bring anyone to justice for the crime.

Next to losing someone I love, next in line would be losing my bike.  Really.  I don’t know what causes that connection.  It’s just a machine and can be replaced fairly easily with insurance proceeds.

But wow, my connection to that piece of two-wheeled machinery is far greater than just about anything else.  Why is that?  What connects us so closely with an inanimate object?

Is it the experience it has provided us?  Is it the pure pleasure of riding?  Is it because it’s something that has carried you to places you need to go or want to go?  What connects us so closely to motorcycles?  I think its a combination of things but I can’t put my finger on any one thing.

So what about you?  What do you think brings us so close to our bikes?  Let us know in the comments below.