“For the finished bike, ready to be delivered to the customer, we need [until] September 2020.”  – Gianluca Galasso to MCN

The revised Tesi H2 had initially been scheduled for June delivery.  However, the impact of COVID-19 and a month-long factory shutdown brought that schedule to an end.  But apparently, Bimota is making headway with the first 20 full production bike completing production in September.

Prototype machines are currently in testing.  Recently, Bimota released a video on its YouTube channel showing the bike undergoing testing at the Autodromo dell Umbria circuit in Magione, Italy.  Bimota chose the track to test the Tesi’s brakes as well as other technical criteria.

“Basically, the whole bike had to be tested – particularly the brakes, trail, ground clearance, height, shocks setting and few other small parts,” he added.

While still in the midst of the pandemic, Bimota took additional steps to ensure the safety of its personnel.

“We had to declare in advance the name of the Bimota workers in attendance because only they were allowed to enter in the paddock. Once there, they had to wear the masks and have their body temperature checked. The garage and the restrooms were sanitised every two hours by the authorised personnel.” 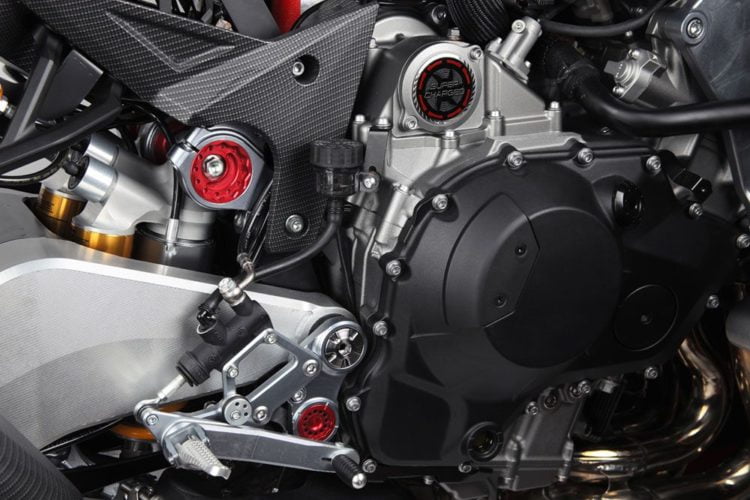 The new Bimota Tesi H2 made its first appearance at EICMA 2019.  There, Kawasaki announced that it had purchased a 49% share in the Italian specialty motorcycle manufacturer.  Now that the deal is complete, the revised Tesi H2 uses Kawasaki’s Ninja H2 engine, making a claimed 227hp from its inline four-cylinder supercharged engine.