A few weeks back, there were strong rumors that Kawasaki had bought out legendary boutique bike builder Bimota. Turns out that the rumor is half-true, and it’s resulted in an absolutely stunning new machine, the supercharged Tesi H2.

The word coming out of the EICMA motorcycle show in Milan this week is that Kawasaki has bought 49.9 per cent of Bimota—it doesn’t control the company, but it will certainly have a vested interest in making Bimota a success.

The first result of this new business arrangement is the Tesi H2, a revolutionary hyperbike built around the same supercharged 998 cc engine that Kawasaki uses through its H2 line. Kawasaki has different levels of tuning, depending which bike you’re buying (the non-street legal H2R makes a lot more power than the street-legal models). Supposedly, the Tesi H2 uses the same tuning as the Kawasaki H2 naked bike, which makes 230 hp. If that isn’t the most powerful production streetbike on the market, it’s pretty close. 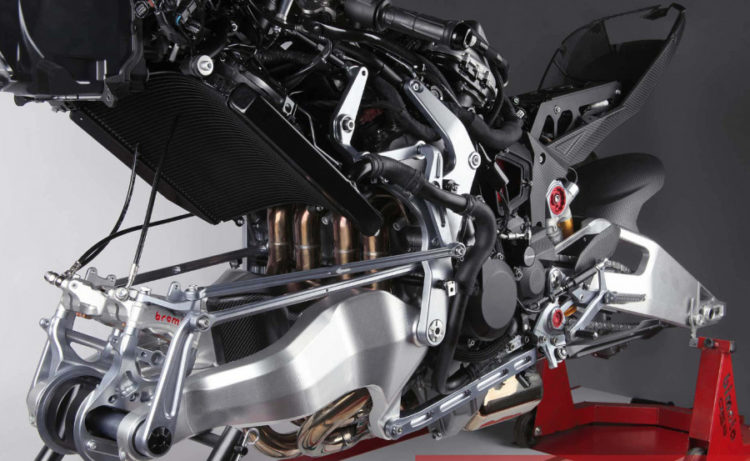 Kawasaki most likely never imagined its supercharged engine would make it into a Bimota, but here it is. Photo: Bimota

While the supercharged engine is impressive, it’s the rest of the Tesi H2 that grabs attention immediately. It is a weird-looking bike. Hub steering is practically a Bimota trademark, and it’s the first thing you notice on this bike. The engine is integral to the chassis, with front and rear suspension systems bolted to the engine cases. It’ll be very interesting to see how that arrangement works over the long term, as no doubt this is a much different application than Kawasaki originally envisioned for the engine.

The front suspension actually uses a shock placed at the back of the bike, activated by a linkage. Aside from that, we don’t know a lot about the bike; there’s a lot of carbon fibre, and what appears to be the fixings required for electronic suspension management. Whatever the case, it’s at least a bonkers approach to superbike design, and it’s very sad that almost nobody will ever be able to afford one. It’s unlikely it will ever even be sold in North America.